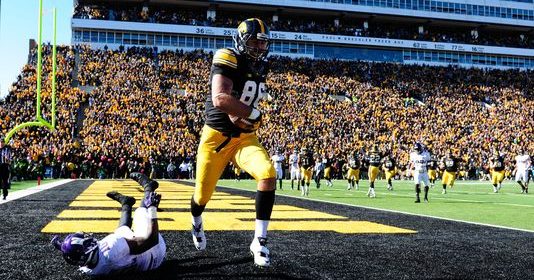 WNUR’s Jim Sannes (@JimSannes) looks at the numbers from Northwestern’s 17-10 overtime loss to the Iowa Hawkeyes and gives the “three up” and “three down” from the game. Let’s rewind back to Saturday morning. A mysterious man in a trench coat walks up to you and hands you the box score of the upcoming game between Northwestern and Iowa. You see that it say that Northwestern outrushed Iowa by 89 yards; what do you do? Personally, I sprint pantsless around my apartment shouting, “IT’S OVER!! THE STREAK IS OVER!!! SUCK IT, AMERICA, YOU BEAUTIFUL HUNK OF FREEDOM!” Instead, I can no longer feel joy, and my right knee involuntarily locks when I hear the word “fumble.” Let’s just break this puppy down so I can forget it ever happened.

Yes, there were three up from this game. Like I said, if you just look at the boxscore, you would have thought Northwestern won this game. This was the first time Northwestern had exceeded 100 yards rushing in over a month (251 against Maine). Yuck.

Stephen Buckley did work against Iowa. The redshirt freshman got 17 carries for 99 yards (5.8 yards per carry), surpassing his previous career high of 58 set last week against Minnesota. I can only assume the increased workload was due to the impassioned pleas of myself and Tralon Williams last week on Stats are for Losers. Duh.

The return on Mr. Colter didn’t hurt, either. Colter recorded 60 yards on the ground, taking every snap in the game in which he was healthy. The ‘Cats are going to miss him next year. Next up is Nebraska, who is ninth in the Big Ten against the run. Look for a similar game plan in Lincoln.

Defensively, after the first drive, Northwestern’s run defense was huge. After an allowing an average of 236.67 yards per game in the first three conference contests, the ‘Cats held Iowa to just 136 Saturday. In the week leading up to the game, I assumed Mark Weisman would have 40 carries for 210 yards and three touchdowns. Instead, he was limited to a pedestrian 56 yards on 13 carries. This was the best Northwestern’s defense has played the entire season, but the offense couldn’t capitalize.

52: Dan Vitale’s 52 receiving yards were his most the season opener against Cal.

The disappearance of the beastly Vitale was one of the big conundrums of the last three weeks. I mean, the dude is a chiseled 6’2”, 220 pounds… hiding ain’t easy. But, Colter found Vitale four total times, including a sweet 31-yard bobbling catch and a 10-yard touchdown on the same drive in the third quarter. I accidentally smiled after those plays.

Here’s a fun stat that Tralon dug up last week: In the first two games, Vitale had four receptions of 10 or more yards. In the next five, he totaled one. However, Saturday he had two such receptions AND one run of 18 yards. Welcome back, old friend.

2: Northwestern only had two “real” drives in which they did not record a first down.

I say “real” drives because the drive after Chi Chi Ariguzo’s interception at the end of the game was just a kneel down. That said, this number does still include one kiiiiiiinda important drive in overtime. Whoops. Maybe should have saved one of those firsts for later.

On the year, Northwestern is ninth in the Big Ten on third down conversion percentage at 42.9. On Saturday, they were able to pick up the first eight of 14 times, leading to scoring drives of 81 and 69 yards in the third quarter. The team moved the ball. They just couldn’t score points, which is, you know, kind of the point. Why couldn’t they score points? Uh… just keep reading.

71: Prior to their two turnovers, Northwestern had moved the ball 71 yards on the two drives combined.

Turnovers suck, man. They suck even more when they end a promising drive. This happened twice Saturday, and Northwestern lost because of it.

The first turnover came on the third drive of the game. Iowa had just taken a 10-0 lead, and it looked like Northwestern was destined for its fourth straight loss. Then the offense started moving the ball. They had picked up 45 yards in eight plays to get close to Jeff Budzien’s field goal range. Then the ball was on the turf, Iowa had it, and the score remained 10-0 heading to halftime. Momentum done just got blowed the heck up.

Then the second turnover. This one came with just 3:14 left in the fourth quarter. Northwestern was moving the ball well before a Vitale illegal block penalty pushed them back 15 yards. You know, whatever. They’re still in Iowa territory at the 45 yard line. Then, a tough break leads to another turnover, and once again the ball is in Iowa’s court. You know the rest.

21: Over the last four games, Northwestern has allowed 21 sacks, bringing their season total to 28.

I feel like this is the ten bajillionth time I’ve said it, but Northwestern only allowed 16 sacks last year. They have allowed that many in the last three games. WHERE FOR ART THOU, PAT WARD AND BRIAN MULROE???

Yes, stats are for losers in this case. I get it. Iowa sacked Northwestern six times on Saturday, but the ‘Cats only lost nine yards. It’s a bit misleading. But, that doesn’t change the fact that on each drop back, it seems like Siemian and Colter have to roll out of the pocket to buy time. The blame goes both on the offensive line for not holding the blocks long enough and the quarterbacks for not getting rid of the gosh darn football. Sacks on sacks on sacks. Sack city. However you want to say it, it has been mind-boggling.

0: Treyvon Green did not record a single carry on Saturday.

I know I was just singing the praises of the rushing game. But this makes no sense to me. The dude was the feel-good story of the beginning of the season after going through all he did last year and breaking out the first three games. Now, he doesn’t get to see the field. Why?

I get that we don’t know what goes on behind the scenes. But the man produced when he was given an opportunity. Green hasn’t had more than nine carries since he busted open for 158 yards and two touchdowns against Western Michigan. Again, I don’t really understand. At this point, what could go wrong?

Under Coach Fitz, Northwestern has a .364 (12-21) winning percentage in the month of October. As we turn the page to November, though, Northwestern is 15-9 in that month and has only lost multiple games twice in his eight years at the helm. This team has played well enough to win three of the last four games. If they can just get a few breaks, they still have the ability to save face and make it to a bowl game.