Posted on October 29, 2013 by WNUR Sports Leave a comment 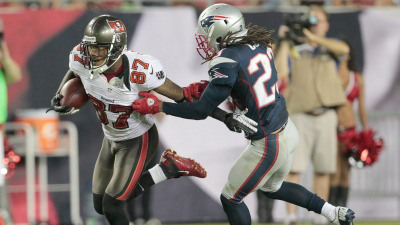 Started at offensive tackle in the Saints 35-17 win over the Buffalo Bills. The Chicago Bears were on a bye this week.

Served as backup defensive tackle in the Bills 35-17 loss to the Saints.

Starting Nose Tackle in the Redskins 45-21 loss to the Denver Broncos.

The Chicago Bears were on a bye this week.

One tackle (1 solo), one pass defended, and one interception in the Patriots 27-17 win over the Miami Dolphins.

Marquice Cole. Cole had one tackle (1 solo), one pass defended and an interception in the Patriots 27-17 win over the Dolphins. Cole intercepted a pass from Dolphins quarterback Ryan Tannahill when Patriots cornerback Devin McCourty tipped the ball and Cole caught it as he fell out of bounds. On the season, Cole has three tackles (3 solo), one interception, and one pass defended. Cole went undrafted in 2007, and moved through the Raiders, Titans and Saints practice squads before signing with the Jets in 2009. He was promoted to the active roster in 2010 and played mostly on special teams. After playing three seasons with the Jets, Cole signed with the Patriots in 2013. For his career Cole has 50 tackles (13 solo), nine passes defended, four interceptions and one touchdown.