Posted on November 19, 2013 by WNUR Sports Leave a comment 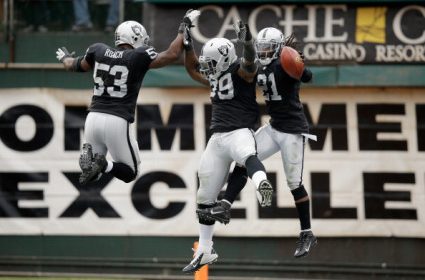 Started at offensive tackle in the Saints 23-20 win over the San Francisco 49ers.

Three tackles (1 solo) and one tackle for a loss in the Bills 37-14 win over the New York Jets.

Starting nose tackle in the Redskins 24-16 loss to the Philadelphia Eagles.

Four tackles (3 solo), one pass defended and one interception in the Raiders 28-23 win over the Houston Texans.

Two tackles (2 solo) in the Patriots 24-20 loss to the Carolina Panthers.

Nick Roach. Roach had four tackles (3 solo), one pass defended and one interception in the Raiders 28-23 win over the Texans. Roach intercepted Houston Texan quarterback Case Keenum midway through the first quarter in Texans territory, setting up a Raider touchdown. For the season Roach has 68 tackles (48 solo), 2.0 sacks, three stuffs for nine yards, one forced fumble, one interception and one pass defended. Roach, as the middle linebacker, is the leader of the Raiders defense calling the plays in the huddle. Roach earned a degree in Art Theory and Practice at Northwestern University.

To read more about Roach, check out a profile the San Francisco Chronicle did on him a few weeks ago: http://www.sfgate.com/raiders/article/Raiders-Roach-masters-art-of-leading-the-defense-4950238.php