Then and Now Preview: Iowa Hawkeyes

Posted on January 24, 2014 by WNUR Sports Leave a comment 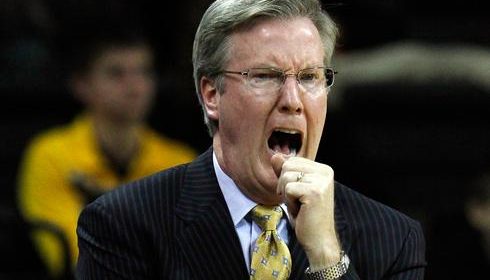 WNUR’s Michael Stern (@MichaelJStern23) previews each of Northwestern’s opponents by looking at how each team did for the first few years under their current head coach. Today: Iowa and Fran McCaffery.

Northwestern, fresh off its first double-overtime win of the Chris Collins era, looks for its first victory over a top-ten opponent of the Collins era as the tenth-ranked Iowa Hawkeyes enter Welsh-Ryan Saturday morning. Wildcat fans should notice that Iowa, under coach Fran McCaffery, is only a few years ahead of Northwestern in the rebuilding process.

Then: The Hawkeyes went downhill quickly when coach Steve Alford left for the University of New Mexico. His replacement, Todd Lickliter, was fired after three seasons and a 38-57 record and replaced by former Siena coach Fran McCaffery before the 2010-2011 season. McCaffery’s first Hawkeye team went 11-20 and lost twice to Northwestern, but featured strong freshmen Melsahn Besabe, Roy Devyn Marble, and Zach McCabe. McCaffery got the Hawkeyes over .500 in his second season, as Iowa finished 18-17, lost twice to Northwestern (AGAIN), and reached the NIT. Freshmen Josh Oglesby and Aaron White joined Besabe, Marble, and McCabe in Iowa City and the five youngsters teamed with senior Matt Gatens to lift the Hawkeyes to a winning record. Last season, McCaffery finally got the Hawkeyes over the hump. Iowa beat Northwestern three times, went 25-13, just missed the NCAA tournament, and reached the NIT championship game. Oglesby, White, Besabe, Marble, and McCabe were joined by freshmen Mike Gesell and Adam Woodbury to give McCaffery a strong seven-man rotation.

Now: Those seven players, along with sophomore transfer Jared Uthoff, are McCaffery’s top eight players this year on a deep, experienced, and talented Hawkeye team. Iowa is 15-4 this season, with losses to ranked teams Villanova, Iowa State, Wisconsin, and Michigan. The Hawkeyes are unbeaten at home, rank sixth in the nation in points per game, and throttled Northwestern 93-67 at Carver-Hawkeye Arena earlier this season. Going quickly through Iowa’s eight man rotation: Marble, the son of former Hawkeye hoops great Roy Marble, leads the team in scoring with 16 points a game and shoots 38 percent from beyond the arc. White is a double-double machine who averages 14 points and 7 rebounds and shoots a jaw-dropping 69 percent on two-point field goals. Uthoff, a transfer from Wisconsin in his first season on the court in Iowa City, averages 9.5 points a game, shoots 55 percent from the floor, and makes free throws at an almost Nash-like rate of 85 percent. Basabe averages 8 points and 7 rebounds and recently went over 1,000 total points for his career. Gesell starts at point guard and leads the team with just under 4 assists per game, McCabe provides 7 points a game off the bench, and Oglesby has played only seven games this season after an early-season foot injury but shoot upwards of 57 percent from three-point range. Woodbury is 7 foot 1, starts at center, and averages 6 points and 4 rebounds a game in limited minutes.