Then and Now Preview: Michigan State Round 2 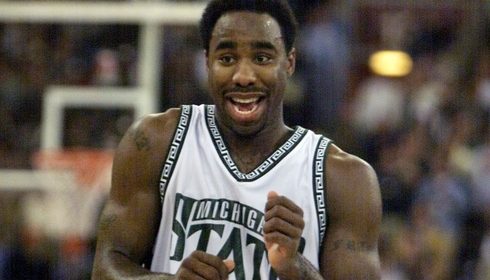 WNUR’s Michael Stern (@MichaelJStern23) looks back at a past Michigan State championship team and provides an injury update for tonight’s game.

I’ve already covered Michigan State in a then-and-now preview, but Northwestern travels to East Lansing to face the Spartans again Thursday night. For a different look at the Spartans, I found out where some members of Tom Izzo’s 1999-200 NCAA Championship team are now.

The only player from the 1999-2000 championship team still in the NBA is Jason Richardson. Currently a Philadelphia 76er, Richardson averaged 5 points per game as a freshman for the champion Spartans. He was drafted by the Warriors, and won two straight slam-dunk contests in 2002 and 2003. The Warriors traded him to Charlotte in 2007 for the draft rights to Brandan Wright, and the Bobcats traded him to Phoenix in 2008 for Boris Diaw and Raja Bell. Richardson stayed in Phoenix for a couple years before he was traded to Orlando in the Vince Carter deal. Two years later, he was traded to Philadelphia in the Dwight Howard trade.

Charlie Bell (11.5 points per game) and Morris Peterson (16.8 points per game) both averaged in double figures for the 1999-2000 Spartans, and both had long NBA careers. Bell played for the Bucks from 2005 until 2010 and then spent a season on the Warriors. Bell’s ex-wife Kenya appeared on the MTV series “Basketball Wives.” Peterson played for the Raptors from 2000 until 2007 before spending three seasons in New Orleans and half a season in Oklahoma City. Since retiring in 2011, Peterson has founded the website worldartistrefuge.com. The website’s slogan is “where entertainment, fashion, and art culture thrive.” Mateen Cleaves (12.1 points per game) was the third of four double-figure scorers on the 1999-2000 Spartans. The most outstanding player of the 2000 Final Four never found a long-term home in the NBA, and retired after five D-League stints in 2009. Cleaves runs the 1 Goal 1 Passion foundation, and serves as an NBA analyst for Fox Sports Detroit and a college basketball analyst for CBS Sports Network.

Andre Hutson (10.2 points pre game), the fourth double-digit scorer on the 1999-2000 Spartans, never made it to the NBA, but he and former Spartan teammate David Thomas run the Evergreen Car Wash and Detail in Lansing, 11 minutes from Breslin Center.

Two assistants from the 1999-2000 team currently head Division 1 basketball programs. Stan Heath is in his seventh season as head coach at the University of South Florida following five seasons in charge at Arkansas, while Brian Gregory is in his third year leading Georgia Tech after eight seasons at the helm of Dayton.

Current Spartans injury update: Adreian Payne has returned to action for the Spartans and showed up in a big way Sunday, sinking a game-tying three with nine seconds remaining before Michigan State allowed a late basket and lost at Wisconsin. Despite Payne’s long-awaited return, the Spartans are not yet at full strength. Senior point guard Keith Appling did not play Sunday against the Badgers with a wrist injury, which meant more minutes for freshman Alvin Ellis III. Forward Brendan Dawson broke his hand in late January and is tentatively scheduled to return to action next week.