Posted on February 20, 2014 by WNUR Sports Leave a comment 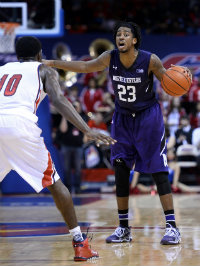 In this week’s edition of  Joe’s Corner, WNUR Sports co-Director Joe Misulonas looks at the players returning to next year’s Northwestern men’s basketball team and evaluates whether they have to earn their playing time.

As the Northwestern men’s basketball season winds down and Chris Collins’ debut year comes to a close, it’s time to look to next year’s team. Unless they run the table in the regular season and make a run in the Big Ten Tournament (unlikely), Northwestern will not make an NIT appearance, and will not make the program’s first NCAA Tournament appearance unless they win said Tournament (verging on impossible). So while there isn’t anything tangible to play for as a team, many of the players returning next year will need to prove they deserve playing time with a solid recruiting class coming in next year. Next year’s class features two forwards (one a 3/4, the other a 4/5) and three guards. For some of the current Northwestern Wildcats, minutes will not be in abundance in 2014-15. I break down who’s safe, who’s on the bubble, and who’s in the DANGER ZONE!

Cobb and Olah are pretty much guaranteed starters on next year’s team. Olah’s leap between his freshman and sophomore year wasn’t as great as I hoped, but he definitely improved. His low post game is improved over last year, his footwork’s better, and his defense is more consistent than it was last year. For this team to be successful next year, he needs to make another leap. As the lone seven-footer on the team, 5.0 boards per game isn’t going to cut it. Rebounds have always been a Northwestern weakness, but having a seven-footer was supposed to stem the tide a little bit. I think Olah will continue to work on his game in the offseason and will come back with an even better skill set. If he can get near double-double averages per game, that would be a great sign for this team.

Cobb’s been the best player on the team this season. Yes, he’s averaging less points per game than Drew Crawford, but he’s shooting the same percent from the field and has taken almost 100 less shots. He takes less bad shots than Crawford, handles the ball better, and is the superior defender. Cobb’s coming off two really good performances at Michigan State and Minnesota, where he dropped 22 and 23 points respectively. I think Cobb will solid 2-guard for this team next season, and will hopefully provide solid veteran leadership to the incoming freshmen class.

On the Bubble: Tre Demps and Sanjay Lumpkin

My personal definition for “on the bubble” are guys who’ve played well this season and I expect to play solid minutes next season, and maybe even start, but still need strong finishes to the season to exemplify why they deserve those minutes.

When I watch Tre Demps, I like him. He finds ways to get open shots, seems to hit enough of them that I don’t get a bad feeling in my stomach every time he goes up with the ball, and defensively he seems to hold his own (unlike certain players in the next category). But then I look at the stats and I’m unimpressed. He’s shooting less than 40% from the field on the season, less than 70% from the free throw line, he has the same number of steals as Nathan Taphorn, and despite playing in nearly 100 less minutes, he’s taken the same number of shots as Cobb. Demps is great at creating his own shot, not as great at finishing, and defensively he hasn’t reached the point where you’re confident to have him in the game in crunch time. But he’s got great confidence and when he gets hot, he can really light a team up. I sense his role on the team next year will be the same as this year: 6th man who comes in to catch the opposing defense off-guard and hopefully get hot with a few outside shots.

Lumpkin is probably going to be a starter on this team next year. He’s the only player on the team to start every single game this season. He’s the best defender on the team. He’s versatile and athletic. He can guard guys on the block and on the perimeter. On the defensive end, I have no concerns about him.

But come on, offensively? You’re going to tell me you’re confident in next year’s team when they’re starting a guy averaging less than 4 points per game, shooting 37.6% from the floor (23% from the 3-pt line)? Maybe part of the reason Northwestern struggles to score is because they’re basically playing four guys on offense at a time? Defenses can sleep on Lumpkin, which is problematic because it allows his defender to play more aggressively. They can double team the ball-handler on Lumpkin pick-and-rolls, double Olah when he gets the ball in the post (part of the reason Olah gets stripped too often), etc. If Lumpkin doesn’t improve his offensive game, it may not jeopardize his playing time, but it does limit the scoring capability of this team.

Here’s a not so great statistic: Sobolewski has not scored a single point since the Big Ten opener against Wisconsin. Part of this is due to injury. But part of it is that the coaching staff realized the team is better with him on the bench than on the floor. Sobolewski’s defense has never been good, but there were other guys in the same boat. This year, the Demps-Cobb-Crawford-Lumpkin-Olah rotation (which has played the most minutes since the Wisconsin game) has been very solid on defense.

I don’t want to harp too much about Sobolewski, as I wrote an entire column about him last month. Needless to say, his offense numbers have been very bad this season and have not improved. He barely leaves the bench during games, and with two point guards coming in next season, Sobolewski will have even more competition to deal with. I’m not sure how much more of Dave Sobolewski we’ll see in a Northwestern uniform.

Since Sobolewski’s injury, Abrahamson’s been getting more minutes. And he hasn’t been bad, per say. He’s only shooting 36% from the floor, but he doesn’t shoot that often. 64 of his 86 FGAs this season have been three-pointers, and he’s made 34% of those. His shooting’s decent enough that he’ll probably get minutes next season.

But with Vic Law coming in, it’s unlikely Abrahamson’s going to continue getting starts. His defense is shaky, he’s small and can be pushed around by bigger forwards and doesn’t have the speed or athleticism to defend guards, and he doesn’t make much of an impact on games outside of his three-point shot. And since Nathan Taphorn plays a very similar style of basketball, Abrahamson’s one cold streak away from perpetual benchwarmer. If his shooting improves and he works on his defense, he can probably find minutes, particularly if guys are in foul trouble or the team’s in need of offensive assistance (see: Lumpkin).

Guys I Didn’t Write About: Nathan Taphorn and Aaron Liberman

These guys don’t play enough minutes now for their roles to be dramatically different next season. I don’t see Liberman getting anything more than the rare appearance he currently enjoys, especially with Gavin Skelly joining the team next season.

Taphorn is in more control of his future. He could steal minutes away from Abrahamson if he works on knocking down outside shots. I’m sure Collins holds some good will towards Taphorn for staying with Northwestern after Bill Carmody’s firing last season. But he is still a Carmody-recruit, and anyone from the old administration is at risk with each new class Collins brings in.