Two Phases: Back with a Vengeance 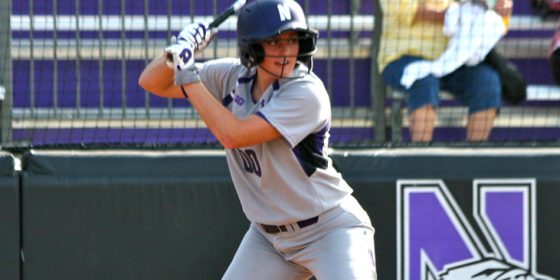 WNUR’s Ben Goren (@BenG412) breaks down the week that was in Northwestern Softball as they head into the last week of the regular season.

Two Phases: Back With a Vengeance

It was a tale of two series for Northwestern Softball this past week, as what looked like a promising start against Illinois was erased by three straight losses to Ohio State in Columbus. 2-3 was almost certainly not what coach Kate Drohan had in mind when looking at the schedule, but with one week before Big Ten Tournament play, there is still time to right the ship and regain momentum for the post season. Against Illinois, the Northwestern pitching staff strutted its stuff, while Illinois showed why they are tied with Michigan State in the cellar of the Big Ten. In game one of a double header, Kristen Wood scattered around eight hits and two walks, giving up 3 earned runs while striking out eight Illini hitters. Not anything to write home about, but a solid, dependable effort from the Wildcats’ ace. In game two, freshman Nicole Bond might have had the best game of her young college career, with six innings of one hit ball, no walks, 1 hit by pitch, and nine Ks, a career high, en route to a mercy rule victory. Pure dominance.

Against Ohio State, it was a different story. Wood threw well enough to give the ‘Cats a chance in game one, but her high fly-ball to ground-ball ratio (eight FO to two GO) ultimately did her in, as a 2-run Cammi Prantl homerun would be enough for the Buckeyes to win. In fairness to Wood, it’s always hard to swallow a loss when you keep your WHIP under one. But in the last two games of the series, the wheels came off. Bond and Sammy Albanese combined to give up eight runs (five earned) on 11 hits in game two, and in game three, Wood and Bond teamed up to give up seven runs (six earned) on nine hits and eight walks. Inconsistency has bitten Northwestern earlier in the season, and it plagued the Wildcats against OSU.

A quick defensive note, Northwestern had 4 errors in their 5 games last week. There’s nothing like giving teams 4 outs in an inning to frustrate a pitcher and put yourself behind the eight ball. Andrea Filler waits for the pitch

Northwestern can hit the stuffing out of the ball on any given night, and with the exception of Friday’s 3-1 loss against Ohio State, this week was a showcase of that. Marisa Bast had herself a week: 6/15, nine RBIs, and two HRs added to what has been an astonishingly successful campaign at the dish. Bast is now hitting a cool .350 on the year. Not too shabby.

Setting the table in front of Bast was, as always, Emily Allard who had two 3-hit games as her average now rests at .378. Andrea Filler also had a good week, swatting 3 doubles in Friday’s 3-1 loss against Ohio State, bringing her total to 10 on the year, good for best on the team with Andrea DiPrima. For good measure, Brianna LeBeau hit safely in every game as her average creeps above .390. Run production has not been a problem for NU this year. With four hitters above .350, and three more above .310, Northwestern gets ducks on the pond, and more often than not, gets them in.

Northwestern’s week ahead includes a day trip to DePaul to take on the 36-8 Blue Demons before returning home to finish out the regular season against B1G bottom-dweller Michigan State. Expect DePaul to be a test. This crosstown rivalry is fierce and, weather permitting, should be a good one. Northwestern owes the schedule makers a tip of the cap. Finishing out against MSU should give the Wildcats some much needed momentum for the Big Ten Tournament.