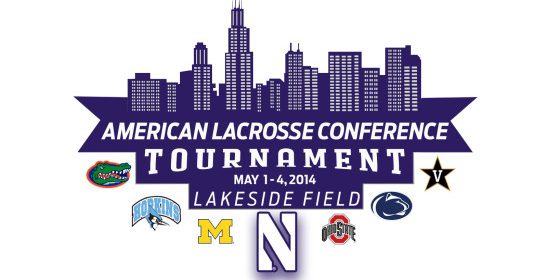 WNUR’s Michael Stern (@michaeljstern23) looks at the field of seven for the final ALC Tournament, which begins this afternoon at Lakeside Field.

Northwestern’s women’s lacrosse team is looking to keep an incredible streak going. The Wildcats, winners of seven NCAA titles between 2005 and 2012, have reached every Final Four since 2005 and every NCAA tournament since 2004. NU appears to be in good shape to keep the tourney appearance streak going, but  the Final Four streak and an eighth national title,  will depend on the Wildcats’ NCAA tournament seed. And the Wildcats’ seed will depend on how they play this weekend at the American Lacrosse Conference Tournament at Lakeside Field. Let’s take a look at how the field shapes up for the final ALC Tournament. Florida Gators (#1 seed, #3 in the IWLCA coaches’ poll) (15-2 overall, 6-0 in ALC play)
How did NU do: The ‘Cats trailed Florida 11-5 and 13-9 in the second half. NU rallied to within 13-12, but had a last-second equalizer waved off due to a crease violation. Kara Mupo led the way offensively for the Wildcats with four goals, while Alyssa Leonard and Jess Caroll added two each.
Player to watch: Shannon Gilroy leads the Gators with a whopping 91 points on the season. The junior midfielder from Northport, New York has found the back of the net 75 times this year. She managed “only” two goals against the ‘Cats, however. The Gators have depth behind their superstar as well. Five other Gators scored 24 goals or more during the regular season, including Sammi Burgess, who paced Florida with four goals against Northwestern.

Ohio State Buckeyes (#2 seed, #10 in the IWLCA coaches’ poll) (12-5 overall, 4-2 in ALC play)
How did NU do: This was also a one-goal loss for the ‘Cats. Ohio State led 8-7 at halftime and 10-8 with 12 minutes left, but late goals by Kat DeRonda and Mupo sent the game into overtime. Cian Dabrowski found the back of the net for the Buckeyes with 5:06 left in the extra session to give the Buckeyes, who were unranked at the time, the upset victory in the Horseshoe.
Player to watch: Katie Chase leads the Buckeyes with 42 goals on the season, and she led the team with four goals when the Buckeyes beat NU earlier this year. Ohio State’s leading scorer on the season, however, is Jackie Cifarelli. Cifarelli, a junior from Rockville Center, New York, tallied two assists against NU and has 43 assists on the season, as well as 16 goals. Ohio State also boasts some scoring depth behind Chase, as five other Buckeyes have scored 20 goals or more this season.

Northwestern Wildcats (#3 seed, #5 in the IWLCA coaches’ poll) (10-5 overall, 3-3 in ALC play)
Player to watch: Kara Mupo is coming on strong late in the season. She tallied four goals in each of NU’s last two games, and is fourth on the team with 25 goals this season. Northwestern has struggled to score compared to the Gators and Buckeyes, so having Mupo playing well in addition to top scorers Kat DeRonda, Kaleigh Craig, and Alyssa Leonard is a key for the Wildcats. Alyssa Leonard, one of Northwestern’s leaders, had a big game Saturday at Wrigley Field and hopes to carry that momentum into this weekend’s ALC tournament. Photo credit: Brian Lee, The Daily Northwestern.

Penn State Nittany Lions (#4 seed, #7 in the IWLCA coaches’ poll) (10-6 overall, 3-3 in ALC play)
How did NU do: The ‘Cats beat Penn State 5-4 in a rainy, low-scoring affair at University Park. Northwestern took a 3-2 lead into halftime, and used a pair of second-half goals by Kat DeRonda to hold off the Lions.
Player to watch: Senior Lauren Purvis was named ALC defensive player of the year. She led the Lions with 29 caused turnovers and 26 ground balls, and also contributed 7 draw controls. Offensively, Penn State relies on the Cyr sisters. Sophomore Madison Cyr leads the team with 39 goals and 45 points, while her older sister Mackenzie is tied for the team lead with 24 assists and has 40 points on the season.

Johns Hopkins Blue Jays (#5 seed, #8 in IWLCA coaches’ poll) (14-3 overall, 3-3 in ALC play)
How did NU do: The ‘Cats dropped a 12-11 double overtime heartbreaker to the Blue Jays at Lakeside Field. NU blew an early 3-0 lead, as well as a 10-9 lead late in regulation. Hopkins scored first in overtime, but Kelly Rich answered to send the game to a second extra period. Dene’ DiMartino scored the winner for the Blue Jays with 2:20 left in the second overtime.
Player to watch: DiMartino’s overtime winner was one of her five goals against the Wildcats. On the season, DiMartino is second on the team with 42 goals. Taylor D’Amore is JHU’s leader in goals (48), assists (43), and points (91). She managed only two points against Northwestern, however.

Vanderbilt Commodores (#6 seed, unranked in IWLCA coaches’ poll) (5-11 overall, 2-4 in ALC play)
How did NU do: The ‘Cats took care of business at home against Vandy, winning 15-9. Kaleigh Craig and Alyssa Leonard each tallied hat tricks, while Kat DeRonda scored 4 goals. Northwestern led 15-7 with seven minutes left before calling off the dogs.
Player to watch: Abby Wheeler leads the Commodores with 38 goals, but she managed only one against NU. Mallory Schonk leads Vandy with 26 assists and 51 points, but she was also quiet against the Wildcats, managing just a goal and an assist.

Michigan Wolverines (#7 seed, unranked in IWLCA coaches’ poll) (4-12 overall, 0-6 in ALC play)
How did NU do: The ‘Cats obliterated the Wolverines 20-6 in Ann Arbor. Five Wildcats managed hat tricks as NU scored the first 10 goals of the game, held an 11-3 halftime lead, and cruised to victory.
Player to watch: Anna Schueler was named to the ALC second team, the first Wolverine to receive a postseason award in the program’s short history. Schueler led Michigan with 31 goals, and was second on the team with 10 assists and 41 points. She scored two goals against Northwestern.

Remember, all Northwestern women’s lacrosse games during the ALC Tournament can be heard on WNUR 89.3, starting today at 4:10 when the Wildcats face Vanderbilt in the first round.