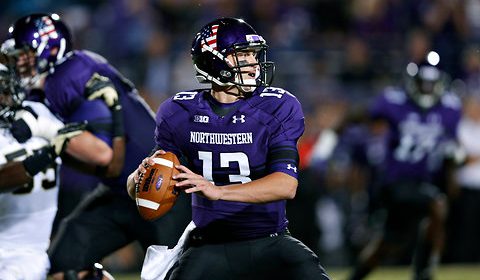 WNUR’s Ben Goren (@BenG412) previews the quarterbacks for the 2014 Northwestern football season, and says who will be the starter by the end of the season (hint: it might not be Siemian).

Spark plug. Game changer.  Versatile.  Leader.  Backstabber.  Brilliant.  Inconsistent.  All are words that have been used to describe one Kain Colter, the two-time captain, two-time Honorable Mention All B1G, quarterback/wide receiver hybrid who’s been more or less the focal point of Northwestern football for the last three years (both on and off the field).  But Colter is on to the greener, snowier pastures of Minnesota to try his hand at the NFL, leaving Northwestern to replace the 2180 career rushing yards, 2166 passing yards, and 50 career touchdowns that he provided.  Fortunately for the Wildcats, the cupboard isn’t empty, but there are certainly some questions that need answering.

Close or Continuation: Northwestern and the Two-Quarterback System

It’s been well documented that for the last couple of years, Northwestern has relied on a two quarterback system, with Colter playing the role of “1A” and now 5th year senior Trevor Siemian playing “1B.”  It has had its critics (yours truly included) and its proponents.  It has worked wonders, and it has cost the team games.  In 2012, the two-QB system led the Wildcats to their first 10-win season since the magical ’95 Rose Bowl year, and a first bowl win since 1949.  In 2013, injuries to Colter and poor utilization of QB talent in the red zone (can we finally say goodbye to the Siemian-Mike Trumpy speed option?) saw the team slip to 5-7 and miss a bowl game for the first time since 2007.   This year, for game one at least, there is no “1A” just a “1” and that’s going to be Trevor Siemian.  As Pat Fitzgerald has said “Trevor is our starting quarterback until I see something different.”  That isn’t to say that there isn’t talent behind Siemian.  Zack Oliver, who backed up the tandem of Colter and Siemian, has attempted 4 passes in his career, but was a highly touted recruit out of Baton Rouge, Louisana.  But the real name on everyone’s lips is redshirt freshman Matt Alviti.  A four-star recruit, and the 7th ranked player in the state of Illinois, Alviti has turned heads in practice and will almost certainly start for Northwestern before his time is up.  Despite Fitz’s assertion that a two-quarterback system won’t feature this year, there are some rumblings that Alviti might take some snaps away from Siemian.  It wouldn’t be the first time Northwestern football tried to juke out the media (looking at you #PersaStrong campaign).

The Times They Are A Changing: Northwestern and the Pocket Quarterback Siemian’s the day one starter, but will he last the season?

Trevor Siemian is not the fleetest of foot.  While many Wildcat fans would be surprised to know that Siemian rushed for just under 150 yards at 5.0 yards per carry last year, Siemian running on designed runs or scrambles isn’t going to be a real successful strategy for moving chains and scoring points.  This will be the first time since offensive coordinator Mick McCall’s first year at Northwestern, way back in 2008 when C.J. Bacher was quarterback, that Northwestern’s starting QB was not a threat to run.  Ever since, NU’s quarterbacks, while often having good to great arms, have been arguably more dangerous when able to dip out of pressure and create on the move.  Mike Kafka, Dan Persa, and Colter provided not only success in designed QB options, but have provided Northwestern’s offensive line with peace of mind, knowing that if they miss an assignment, the man behind them can juke the defensive end, spin around the tackle, and escape the pocket.  While Siemian may have sneaky wheels, he’s not exactly elusive in the pocket, and sometimes he struggles to get the ball out of his hand quickly enough.  Siemian was sacked 19 times last year on 6% of his dropbacks, and Colter was sacked another 16 on 16.3% of his dropbacks.  That kind of protection won’t cut it in 2014.  Either Northwestern’s offensive strategy needs to rely even more on three strep drops and short routes, or the O-line will need to keep Siemian on his feet to push the ball down the field.

While McCall hasn’t had extensive experience with pocket QB’s, Pat Fitzgerald has been around some successful ones.  During his time as Northwestern’s linebacker coach, he watched Brett Basanez light up scoreboards, and as a head coach saw CJ Bacher do much of the same.  Hopefully, Fitzgerald and his coaching staff can navigate the archives of Northwestern football and find some old playbooks to use.

Breaching the Unknown: Northwestern and the Mythical 15 Yard Post Route

Northwestern has become averse to throwing the ball down the field, so much so that the field seems to end 10 yards from the line of scrimmage.  Last year, Trevor Siemian threw for 2143 yards on 296 attempts, good for only a shade over 7.2 yards per attempt.  Colter didn’t fair much better, only averaging 7.1 yards per attempt on his 82 attempts, throwing for a total of 583 yards.  All in all, Northwestern’s passing yards per attempt was 64th nationally, which was notably higher than their 115th ranking in 2012, where NU quarterbacks combined for 5.8 yards per attempt.  If Northwestern was lacking in QB arm strength or wideout talent, the reliance on the two-yard drags and 4-yard quick slants would be more understandable.  But with a legitimate pocket QB in Siemian who has to arm to stretch the field, and talented targets like Tony Jones, Christian Jones, Cameron Dickerson, Rutgers transfer Miles Shuler, and security blanket superback Dan Vitale, there is no reason why Mick McCall’s offense can’t begin to push the ball down the field.  Northwestern was 88th in the country in passing plays over 20 yards last year and 106th in passing plays over 30.  Siemian’s arm is notably stronger and more accurate than Colter’s when it comes to stretching the field, and probably throws the best deep ball of a Northwestern signal caller since Mike Kafka.  The question is whether McCall will unshackle the playbook and let Siemian push it deep.  Siemian has shown himself to be susceptible to telegraphing passes and turning the ball over, throwing 9 interceptions to his 11 TD’s last year.  Whether McCall and Fitzgerald are willing to accept the occasional turnover will determine how many deep routes will be run and if the past is any indicator, McCall isn’t willing to risk much.  If opposing defenses have done their homework, Siemian and the Northwestern offense should see press coverage and pushed up safeties. and unless Venric Mark has another All-American season, there won’t be a whole lot of passing lanes available.  The book is out on the Northwestern offense: it’s now about if McCall can rewrite his book, hopefully with some new routes put in.

Northwestern fans would be foolish to expect All-B1G play from their quarterback this season.  If Northwestern is going to put up points, it’s going to be via the ground game first, the passing game second.  Northwestern would be well-served by solid, not necessarily spectacular, quarterback play with the threat to push the ball downfield tens of yards at a time.  Yet while unspectacular would be enough for the Wildcats, that doesn’t make the position any less interesting to watch.  With a coaching staff historically hesitant to stick to one guy (the Andrew Brewer, CJ Bacher, Mike Kafka controversy of 2006, the two-quarterback system of the last two years, and the lack of a feature running back from Tyrell Sutton’s graduation to Venric Mark’s emergence come to mind) a starting quarterback with a history of inconsistency, and a backup hyped as the best Northwestern QB recruit ever, the leash may be short for starter Trevor Siemian.  We know Siemian will start game one, barring injury.  The starter for game twelve? That remains to be seen.