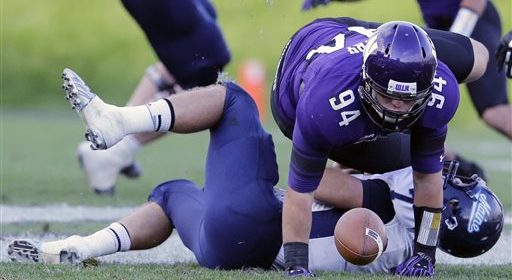 WNUR’s Michael Stern (@michaeljstern23) breaks down the defensive lineman for this year, and who will be stepping up to replace the holes left by Tyler Scott and Will Hampton.

Northwestern’s defensive line play mirrored the rest of the team’s last season. The front four started off strong, holding opponents under 150 yards in each of the Wildcats’ first four games, but went downhill quickly.  NU opponents rushed for over 150 yards in six of the team’s last 8 games, the low point coming in a two week stretch when Ohio State and Wisconsin ran for a combined 534 yards. While injuries definitely played a role, NU’s run-stuffers need to step up in 2014.

Starters: Tyler Scott led Northwestern’s d-line last season. Scott tallied 47 tackles (10 for loss) and six sacks. He also contributed two key interceptions, one assumed game-clincher against Nebraska, and one key interception against Illinois. However, Scott is no longer in Evanston (he signed with the Vikings as an undrafted free agent), leaving junior Dean Lowry as the unit’s leader. Lowry notched 33 tackles (seven for loss) and 4.5 sacks last season, as well as two interceptions (one a pick-six against Maine). Lowry also has a knack for batting down passes at the line of scrimmage, which is especially useful when Northwestern’s secondary gets fooled by play-action against spread offense teams (looking at you, Ohio State and Michigan). Senior Chance Carter also returns to the starting lineup. The Evanston native played in all 12 games last season, delivering 34 tackles (five for loss) and two sacks, and needs to take on a bigger role this season.

The Wildcats will also need to find a replacement for Will Hampton. While his jersey never covered his entire upper body, Hampton covered the center of the defensive line in all 12 games for NU last season. Sean McEvilly will replace Hampton in the starting lineup. McEvilly suffered through an injury-plagued 2013 campaign, appearing in only five games and contributing only nine tackles (four for loss). McEviliy must stay healthy to provide Northwestern with enough defensive line depth to compete against the wave of high-speed offenses invading the Big Ten. Junior Deonte Gibson also enters the starting lineup, replacing Scott. Gibson appeared in all 12 games as well, recording 22 tackles (seven for loss) and three sacks.

Reserves: If the injury bug rears its head again this season, Northwestern’s reserve linemen will need to step up. Some of them saw action last season after injuries to McEvilly and Lowry. Sophomore Ifeadi Odenigbo thrived last season as a pass-rushing specialist, delivering 6.5 tackles for loss and 5.5 sacks. CJ Robbins, a junior from Peru, Illinois, dressed for all 12 games last season, but made little impact (only three tackles). More is expected from him in 2014. Greg Kuhar, a 300-pound sophomore from outside Cleveland, appeared in only six games and made only eight tackles, but he will be expected to add depth as well. Junior Max Chapman recorded his first career sack late in the fourth quarter against Nebraska, and delivered nine tackles.

Future: Six of the top eight on Northwestern’s defensive line depth chart are upperclassmen, so it’s a good thing that the coaching staff brought in four true freshmen. Three-star mid-western recruits Ben Oxley (Ohio) and Fred Wyatt (Kansas) as well as southern standouts James Prather (Tennessee) and Xavier Washington (Texas) should be able to take this year to learn the ropes, but if this year’s defensive line produces a repeat performance of last season (full of underperformance and injury), the youngsters could be called into action sooner than expected.