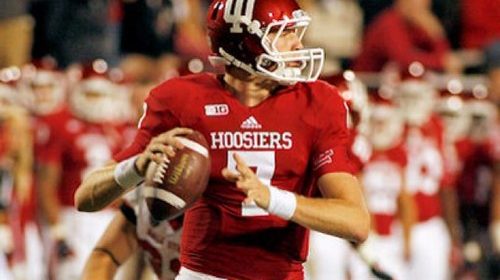 WNUR’s Ryan Fish (@RyanMFish) previews the upcoming football season for the Hoosiers. We polled our staff to predict the standings and record of all the Big Ten teams, and Indiana wasn’t considered very highly:

WNUR’s prediction: Indiana goes 3-9 overall, only 1-7 in conference, good for 2nd to last place in the Big Ten East.

There’s a reason for fans in Bloomington to be excited about the Hoosiers this year. And we’re not just talking about basketball anymore. While Indiana football still has work to do if it wants to become a conference heavyweight, six wins and bowl-eligibility are very possible this season for a team that hasn’t been to a bowl game since 2007. They nearly accomplished that feat in 2013, going 5-7 (3-5 B1G) and showing offensive firepower that can compete with anyone in the conference. Many pieces from last year are returning this fall for fourth-year head coach Kevin Wilson, and the Hoosiers could make some noise in the Big Ten East in 2014.

Offense: The Hoosiers ran an effective two-quarterback system for much of last year, somewhat similar to what Northwestern ran offensively. Nate Sudfeld and Tre Roberson split time under center, but with Roberson’s transfer to Illinois State, it’s Sudfeld’s offense this season. He threw for 21 touchdowns but also nine interceptions; the rising junior has the potential for another big year but needs to avoid the turnover bug in 2014. Roberson was the quarterback who was more likely to run (he was the team’s third-leading rusher), so not having him in the offense this season could have an impact. Another factor is that there isn’t a lot of experience behind Sudfeld at quarterback, which makes his contributions even more essential. Is Sudfield ready to lead the Hoosiers out of the Big Ten basement?

Sudfeld’s top targets last year—Cody Latimer and Kofi Hughes—are both gone. But third-leading receiver and rising senior Shane Wynn returns this fall and should be Sudfeld’s top target. He may be one of the conference’s most productive receivers this season. Combined with an experienced offensive line, and the Hoosiers’ offense could produce similar results to last year when it led the conference in passing offense (306.7 YPG) and was second in total offense (508.5 YPG) and points per game (38.4 PPG). Not to mention, last year’s leading rusher Tevin Coleman returns to a rushing attack that ranked fourth in the B1G in 2013.

Defense: As good as the offense was for Indiana in 2013, the defense was equally as bad. The unit was dead last in the conference in total defense (527.9 YAPG) and scoring defense (38.8 PAPG). That’s not going to get it done. If the defense had been even slightly closer to average, the team would’ve been bowl-eligible. Adding more of a pass rush could really help the Hoosiers; the team only registered 20 sacks last season, which ranks near the bottom of the conference. Senior Nick Mangieri led the team in sacks last fall and anchors this year’s defensive line, which should be improved.

Another problem for the Hoosiers’ defense in 2013 was its inability to get other teams off the field. The team was near the bottom of the conference in 3rd down conversions allowed (46.5 percent) and turnover margin (-3). Not surprisingly, this meant the team was also worst in the conference in time of possession. A bad defense spending a lot of time on the field is a recipe for disaster, and one that must be corrected for the Hoosiers to take a step forward. Co-defensive coordinators William Inge (2nd year) and Brian Knorr (1st year) have their work cut out for them, but most of the starters are returning and so the extra experience should help. I mean, the defense really can’t get any worse this season, can it?

Special Teams: The team takes a big hit in losing placekicker Mitch Ewald, who leaves as the program’s all-time leader in field goals, field goal percentage, and extra points. The placekicker job is a mystery now, with redshirt freshmen Aaron Del Grosso, Dong Kim and Griffin Oakes on the roster. Only time will tell who gets the starting nod and how productive the kicking game will be for Indiana. Punter Erich Toth is back after averaging 40.6 yards per punt last season. Indiana can move the ball and score rather efficiently, however, so they probably won’t need spectacular contributions from Toth. Shane Wynn was the primary return man last year, and he definitely has the speed to make some big plays while returning kicks and punts.

Prediction: A lot of this team’s potential falls on Sudfeld’s shoulders. As the clear-cut leader of the offense, he must take a step forward this season to overcome the departures of Roberson, Latimer and Ewald, not to mention a relatively weak defense. If he can build off his success last season and the defense can improve to even an average level, the Hoosiers can definitely win 6, possibly 7 games next year (most likely 3 or 4 conference wins). Their schedule won’t do them any favors, however: the Hoosiers have road games at Iowa, Michigan and Ohio State and home games against Maryland, Michigan State and Penn State. That being said, the Hoosiers could be a pleasant surprise in the B1G East this year.