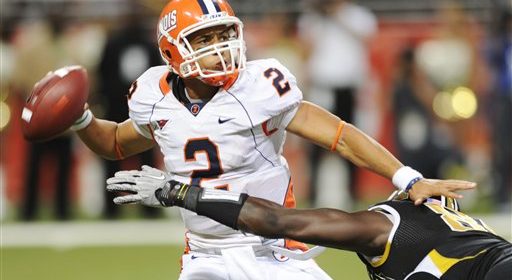 WNUR’s Prediction: Illinois will finish 6th in the Big Ten West, just ahead of Purdue, with a 5-7 record, 2-6 in conference.

The 2011 campaign that saw the Illini head to the Kraft Fight Hunger Bowl and beat UCLA seems like eons ago for fans in Champaign. The 7-6 season was quickly forgotten after the Illini went 2-12 in 2012 with new head coach Tim Beckman. But as he did with his four years at Toledo, Beckman’s club improved after a terrible season, finishing 2013 with a 4-8 season. Senior quarterback Nathan Scheelhaase saved his best for his fourth year in the starting role, leading an offense that finished top five in the conference. But the young Illini defense was no match for the rest of the Big Ten, finishing 11th in the conference overall.

Heading in to the 2014 season, plenty of questions face Beckman and his club. Who will replace Scheelhaase and lead an offense that has been pass-heavy for years? Will anyone be able to step up defensively and keep the Illini competitive in conference games this year? These are just a couple of the key concerns for Illinois as they prepare for the fall.

Offense: Offensive coordinator Bill Cubit managed a fairly impressive offensive unit in 2013 considering how bad the team was in 2012. Quarterback Nathan Scheelhaase was a big reason why; his 66.7 percent completion percentage was 15th best in the country (and he had over 400 attempts, too!).  If Cubit wants to see his offense improve, he’ll need to find a fitting replacement. The man that finished atop the depth charts after spring practices is Wes Lunt, a sophomore transfer from Oklahoma State. With 81 career completions for over 1000 yards, Lunt has by far the most experience of any candidate. Lunt was supposed to be Brandon Weeden’s replacement at OSU, but injuries prevented him from becoming the main man in Stillwater. He’s more of an aggressive passer than Scheelhaase was, and like most transfers, it’ll take time for him to learn Cubit’s system.

Illinois will also need to replace its top three receivers from last year, including Steve Hull, who caught 59 passes for 993 yards. Likely candidates include junior college transfer Geronimo Allison and senior TE Matt LaCosse, who will have to play a large role in Cubit’s quick, horizontal passing game.

If Lunt has trouble connecting with an untested corps of receivers, junior running back Josh Ferguson will have to step up. With only two freshmen beside him, Ferguson essentially makes up most of the rarely used Illini running game. There is good news for Ferguson, though: the O-line remains almost completely intact and should be much better than 2013.

Defense: The key for the 2014 Illinois defense will be who can step up and take control of a very nondescript defensive line. The Illini rushing defense ranked second to last in the conference, and their best tacklers (Jonathan Brown and Houston Bates) are gone. Despite the lack of a standout talent for Illinois, the line was fairly young last year, and a new year brings them new opportunities to make a name for themselves.

A mediocre secondary from 2013 should be much improved this season, as they remain completely intact. Senior Earnest Thomas III has potential to be a real game-changer this year, while the six underclassmen of last year have a bit more experience defending a Big Ten wideout.

A very young defense from 2013 will be a year older in 2014—but everyone knows that. The question is whether that year will make this defense any more imposing to Big Ten quarterbacks during the season.

Special Teams: Unlike Illinois’ offense or defense, the special teams unit’s performance in 2014 should be fairly predictable. Senior punter Justin DuVernois should continue his solid work posting a 41.1 yard average per punt in 2013. Junior kicker Taylor Zalewski was impressive with a relatively small sample size in 2013 (10/12 inside 40, 2/5 beyond). While these numbers aren’t astounding, they are reliable and shouldn’t be a major problem for the Illini in 2014. The return game will rely on V’Angelo Bentley, who was one of only eight players last year to have a kick and punt return TD. If Bentley can improve his 21.4- yard average off of kicks and 15.8-yard average off of punts, he might be a real game-changer for Illinois this season.

Prediction: There are too many questions surrounding this team to be confident in any prediction concerning their success in 2014. Having a solid offense and horrible defense in 2013 landed them a 4-8 (1-7) record. If Wes Lunt lives up to his potential and if this older defense can find a playmaker, this team has the ability to surprise some within the conference. Their schedule is certainly tough, with games at Ohio State, Wisconsin, and Nebraska (not to mention traveling to Seattle to play Washington). A six-game Big Ten losing streak doomed the 2013 Illinois season, and another tough Big Ten result this year seems likely. Head Coach Tim Beckman has always seen his clubs improve year to year, but this team seems destined to repeat a 4-8 (1-7) season. And with the worst recruiting class of the Big Ten this past year, Illinois might find improving from year to year a tough task for seasons to come.