Posted on August 8, 2014 by Eric Klaus Leave a comment 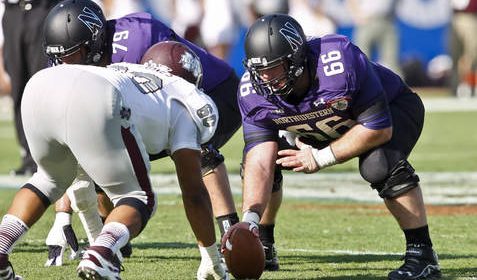 WNUR’s Eric Klaus previews Northwestern’s offensive line, and who will round out the starting five by the start of the season

After a rocky showing last fall, the Northwestern offensive line will be looking for a big bounce-back season in 2014.

In 2013, offensive line was a major area of weakness for the ‘Cats as the group struggled mightily at times, including in several games against Big Ten foes. A fairly young group, a large portion of the unit’s struggles could likely be attributed to their relative inexperience and general lack of familiarity with one another.   In fact, entering last season, Northwestern had just two players with starting experience and one of them (Jack Konopka) actually ended up switching positions. As a result, the ‘Cats ultimately ended up with new starters at four different positions. This led to lots of inconsistent play throughout the season, and in particular against stronger Big Ten defenses like Michigan State, Wisconsin and Iowa.

The group especially struggled to protect their quarterbacks with almost every statistical measure putting NU’s offensive line among the worst in the country in pass protection. Although 2013 was mostly a down year for the unit, there were a couple of positives. For one, the group did a pretty good job in run-blocking as they helped Treyvon Green and others have strong seasons. In addition, the unit did a good job of staying healthy, as they only missed one total start due to injury. Vitabile, Jorgenson, Mogus and Konopka almost assuredly will open the season as starters. As a result, the biggest position battle will be at right guard with Matt Frazier, Ian Park and potentially Adam DePietro battling for the starting spot.

Last year, Park, a redshirt sophomore, beat out the older Frazier in training camp and then went on to start the first 8 games of the season. However, after multiple inconsistent performances he was replaced by Frazier for the final four games. Frazier was solid at the end of the season and as a result enters the season as the favorite to win the spot. However, he did not play well enough to make him a lock for the position, leaving open the possibility that Park or DePietro overtakes him.

Although this was not a particularly strong group in 2013, there is a good chance that the O-line will be one of NU’s strongest units in 2014. The primary reason for this is that all 10 members of last season’s two-deep return, including seven players with starting experience. By comparison, the ‘Cats had only two players with starting experience entering 2013. Another factor that should also help the group improve in 2014 is the fact that Trevor Siemian will be the ‘Cats lone starting quarterback. This is important because Siemian, although less mobile than former starter Kain Colter, should be much easier to block for than Colter was because he stays in the pocket longer while also getting rid of the ball faster. Evidence of this is seen in the incredibly different sack rates that the two passers had a season ago when Colter was sacked on 16% of dropbacks (one of the worst in the FBS) while Siemian was sacked on just 6% of dropbacks.

With greater experience, improved familiarity, and a more O-line friendly quarterback, it seems reasonable to expect this unit to take a big step forward in 2014. If this proves to be true, then Northwestern should be able to return to being an above-average (if not better) offensive unit like they were for many years prior to last season’s poor showing. In an ideal world, this group will pave big holes for Venric Mark and others, while also giving Trevor Siemian enough time to find play-making targets Tony Jones, Christian Jones and others.