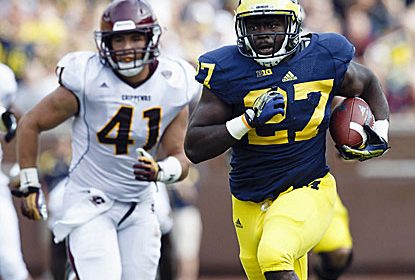 WNUR’s Greg Mroz breaks down the Michigan Wolverines and if they can rebound after their disappointing 2013 season. For the first time this summer the staff prediction and the author’s prediction align, as both the staff and Greg predict an 8-4 overall record, good for 3rd in the East.

When Brady Hoke was hired as head coach of the Michigan Wolverines, his task was simple: return Michigan to the pinnacle of college football. In his first season, he did just that, as Michigan went 11-2 en route to their first BCS Bowl win since the 2000 Orange Bowl against Alabama. In 2012, Hoke guided the Wolverines to an 8-4 regular season record, which included back to back losses without Denard Robinson to Iowa and Ohio State to finish the season, a season opening loss to number 1 ranked Alabama, and a nail biting loss to South Carolina in the Outback Bowl. Everybody expected the 2013 Michigan Wolverines to be one of the best teams that Brady Hoke would have in Ann Arbor. An anemic offense sent Big Blue to a 7-5 regular season record that was capped off by a 31-14 trouncing by Kansas State in the Buffalo Wild Wings Bowl. The 2014 Wolverines come in with lower expectations from the outside, but expectations that are just as high from inside the Michigan athletic department. AD Dave Brandon already replaced one big part of the coaching staff, and if 2014 doesn’t end well, Brandon could be handing out another big pink slip. All speculation aside, lets look at what to expect from the 2014 Michigan Wolverines.

Offense: Gone is Al Borges, the offensive coordinator that could never properly implement his system into a group of personnel that had been recruited to play for a spread offense coach in Rich Rodriguez.  Michigan averages just a touch over 375 yards per game which ranked 86th in Division 1, but what was the most atrocious part of the offense was the run game. Michigan ranked 103rd in rushing offense at 125 yards per game, which was 2nd to last among all Big Ten schools behind 1-11 Purdue. Michigan is going to have to replace 1st round draft pick Taylor Lewan on the offensive line, and the Wolverines do not have a senior among their projected starters. Jack Miller leads the veteran charge as a 6’4” 300 pound center, and if his unit can somehow find a way to open up holes, Michigan will have a fairly decent running game. But that is the biggest question mark going into the opener against Appalachian State. The running game is a two-back tandem of big recruits who have not yet reached their full ceiling. Sophomore Derrick Green was Brady Hoke’s highest rated recruit from the 2013 class, but a combination of a bad offensive line and Hoke’s desire to stick with senior Fitzgerald Toussaint shoved Green back on the depth chart. Rumors swirled that Green would transfer, but he returns to Ann Arbor in 2014 as the feature guy. Expect Green to get the bulk of the touches in new offensive coordinator Doug Nussmeier’s system. But if fellow sophomore back De’Veon Smith can show the ability to gain 5 or more yards at a pop, Michigan could have a great 1-2 punch. Yet that’s dependant upon the ability of the offensive line to create holes, more so with the north-south running style of Green.

Devin Gardner returns for his 2nd full season at quarterback, which should go much better considering he is fully healthy and does not have to try and do it all with his legs. Like the run game, Gardner’s success depends on the offensive line’s ability to give him enough time to throw. As far as receivers go, Devin Funchess is the go to guy for Gardner now that Jeremy Gallon is gone. Dennis Norfleet will have to be more than a returner, and freshman Freddie Canteen could make an impact as well.

Overall the offense has the pieces to be better, but if the offensive line can’t come together, expect to see an offense similar to last years.

Defense: The Wolverines gained more than they lost on the defensive side of the football. Losing Jibreel Black hurts the secondary, but Michigan gained the number one cornerback recruit in the country in Jabril Peppers, and should Peppers be put in the lineup right away, he could make a huge impact in the pass defense. Blake Countess leads the secondary, and he is expected to make a big impact as well. Jake Ryan anchors the line backing corps, and the senior captain has experience on both sides of him in senior Desmond Morgan and junior Royce Jenkins-Stone. Up front Frank Clark leads the charge at defensive end, but the question mark is whether Quinton Washington’s production can be replaced. The defense does not need nearly as long of an analysis, but they will be counted upon a lot if the offense isn’t up to snuff.

Special Teams: Replacing Brandon Gibbons will be tough, as Michigan couldn’t find a way to do it last year when he was kicked off the team mid season. Matt Wile last year had to replace Gibbons at the end of the year, he made all five extra points and was three for five on field goals. That is obviously a very small sample size, but that is all people are really going to be able to go on when evaluating Wile, who was mainly a punter and a kickoff specialist in his first three years. Will Hagerup will return to punting duties in 2014 after sitting out all of 2013 with injury. This is a unit that was stabilized in the past 2 years, but questions will creep in if Wile struggles early on.

Schedule Analysis: Michigan has a very up and down conference schedule. They benefit from playing Rutgers and Maryland in their first year in the Big Ten conference. But there are no guaranteed wins for this squad. After their opener against Appalachian State, a game they famously lost in 2007, Michigan goes to Notre Dame for their last scheduled matchup with the Irish. That will be a tough game, but questions are swirling around the Irish program in the wake of academic scandal within the program. The Wolverines face Indiana and Northwestern, teams they struggled with but beat in 2013. Their toughest three games will be at Ohio State and Michigan State, along with a home tilt with Penn State. If the Wolverines win one of the Michigan State/Ohio State games then that will be considered a big accomplishment.

Overall:  Michigan has a new offensive coordinator in Doug Nussmeier which brings hope to a unit that struggled mightily last year, but there are too many questions along the offensive line to pencil this team at the top of the East Division. The old adage is that your team is only as good as your offensive line, and this offensive line is a work in progress. The Wolverines are too talented to not win at least 8 games, but that is this team’s ceiling.