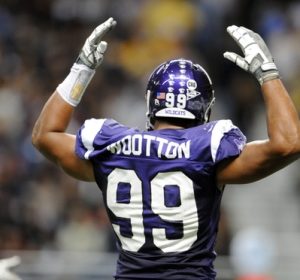 WNUR’s Ari Ross details how Northwestern’s alumni did in the NFL during opening week.

Started at offensive tackle in the Saints 37-34 overtime loss to the Atlanta Falcons. DE Corey Wootton while playing  for the Wildcats

Recorded one tackle (1 solo) and one pass defended in the Vikings 34-6 win over the St. Louis Rams.

Bryant served as a backup defensive lineman, but did not record any statistics in the Bills 23-20 overtime win over the Bears.

Cofield recorded one tackle (1 solo), one tackle for a loss, in Washington’s 17-6 loss to the Houston Texans. Cofield suffered a high ankle sprain during the game and is expected to be out at least three weeks.

Roach was inactive against the New York Jets due to a concussion.

McManis served as a backup defensive back, but did not record any statistics in the Bears 23-20 overtime loss to the Bills.

Corey Wootton. Wootton had one tackle (1 solo) and one pass defended in the Vikings win over the Rams. Wootton, a former Chicago Bear, agreed to a one-year, $1.5 million contract with the Vikings this offseason, with another $500,000 in incentives. Last season, Wootton logged 862 snaps with the Bears and had 34 tackles (27 solo), 3.5 sacks, one forced fumble and two recoveries and five passes defended in his best season since being drafted by the Bears in the fourth round on the 2009 NFL Draft. Wootton had hip surgery this offseason, but is now fully recovered and will see playing time at both defense end and tackle with the Vikings according to Mike McCartney.