Posted on September 19, 2014 by WNUR Sports Leave a comment 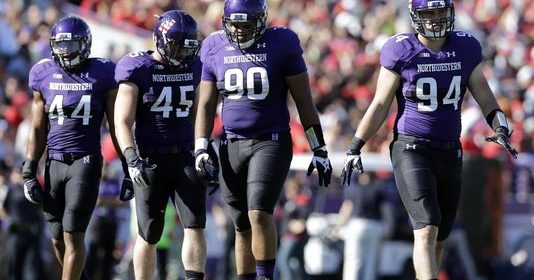 Cameron Songer (0-0) (@CameronSonger): Northwestern 28, Western Illinois 20. The ‘Cats are in need of a statement win, and this won’t be it. Still, Northwestern has more than enough talent to handle the visiting Leathernecks. I imagine the ‘Cats will get ahead in the first half and coast to a win. Player to watch: Treyvon Green. Northwestern’s #1 running back hasn’t managed more than 3 yards per carry this season. If the offensive line can’t create some running lanes for Green against an FCS opponent, it’s not a good sign for NU’s offense.

Tralon Williams (0-1) (@itsyaboytray): Northwestern 31, Western Illinois 14. NU is desperate for a win and thankfully has an FCS opponent. Players should be focused after a grueling two weeks. Still lots of offensive question marks with Tony Jones still out and no clear #1 running back. Defense also has to step up after being victimized by NIU. Player to watch: Treyvon Green. Will he rise to the occasion and be the #1 back? Or will he just become a lost part of the committee?

Ben Goren (0-1) (@BenG412): Is this game even predictable?  Is Northwestern, 2 weeks removed from their last game, even in a position where we can guess, forget predict, what kind of product is on the field?  Northwestern will win, simply because Western Illinois is an FCS school.  Score?  Not enough to make Northwestern fans feel good.  Standout performances?  None that silence the growing rumbles of discontent amongst fans.  This game only provides a momentary break before the B1G season starts and Wildcat depression hits new heights.  Brace yourselves, fans, winter is coming.

Nick Scoliard (0-2) (@NickScols): Northwestern 28 – Western Illinois 24. While Ben tends to be over dramatic due to his PTSD from being a Wildcat fan all of his life, he has a point. The score isn’t going to make anyone happy even if they win. For this to be a real win to make the fan base believe in the team, it needs to be a blowout. Unfortunately, it doesn’t seem liek it will be. Player to Watch: Trevor Siemian. No one on this has more burden to bear than Siemian, taking an option-heavy offense into a pro-style offense with a less-than-stellar transition. He will need to be on his A+ game to over come the terrible playcalling, ineffective offensive line, and lack of top talent at RB and WR.

Jacob Murphey (0-1) (@jacobmurphey22): Northwestern 24, WIU 10. Is a game against a Summit League team just what the doctor ordered for the Wildcats? WIU played a competitive first half against Wisconsin a couple weeks ago, so they won’t be an easy matchup– especially for this Northwestern team.  Expect two tough weeks of practice and a bigger student section to make a difference in this one. Trevor Siemian will put together his best game of the year (not a great accomplishment). Player to watch: SB Dan Vitale, who has been relatively quiet these first two weeks, will be big in the red zone.

Michael Stern (0-2) (@michaeljstern23): Northwestern 24, Western Illinois 10. The ‘Cats have been overmatched in their first two games, so luckily the Leathernecks are headed to Ryan Field. NU should be able to push around this FCS foe with relative ease, although I’m not convinced the offense will light up the scoreboard. Player to watch: Dean Lowry, NU. The big d-lineman wreaked havoc against Maine in last year’s FCS game, grabbing a pick-six and dominating the line of scrimmage. What will he do for an encore against WIU?

Ryan Fish (0-2) (@RyanMFish): Northwestern 31, Western Illinois 17. Northwestern can’t lose to Western Illinois… right? With the season NU is having, you can’t guarantee anything. I do think the ‘Cats are able to notch their first win of the year, and I think it’s a bounce-back game for the offense. Siemian’s decision-making, the offensive line, and the team’s running game all need to improve. Player to watch: Kyle Prater. He had his best game as a Wildcat against NIU two weeks ago, so he could have another nice day against the Leathernecks’ defense.

Ari Ross (0-2) (@aross50): Northwestern 17-12. This game is a must win for the ‘Cats. If they lose, all hope is lost and they could possibly go 0-11. Against any other team, Northwestern would probably be the underdog, but this Western Illinois team is bad. To sum up their loss to Wisconsin last week, on the opening kickoff, the WIU kick returner fielded the ball outside the end zone and then kneeded the ball in the end zone, giving Wisconsin a safety. Northwestern should be able to beat this team. I expect it to be similar to the Maine game last year, where both teams look bad and NU pulls ahead late. Player to Watch: Trevor Siemian, QB, Northwestern. Injured in the game against NIU, how will Siemian respond, especially if pressured. Tanner McEvoy threw for 283 yards and 3 touchdowns against WIU, if Siemian can come close to that, NU should win easily.

Jason Dorow (0-2) (@jasondorow): Northwestern 34 -13. Northwestern struggled early against Maine and Western Michigan last year. Considering Western Illinois was only down 9-3 to Wisconsin two weeks ago, I think NU will be challenged again Saturday. After a close first half, Pat Fitzgerald rides his running game to an easy victory. Player to watch: Trevor Siemian. It will be our first good look at NU’s quarterback since he suffered an injury in the final minutes against NIU.