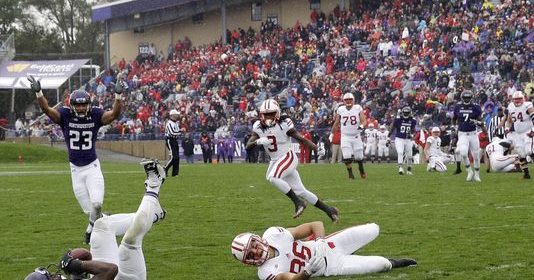 WNUR’s Ari Ross (@aross50) writes about some statistics from the Northwestern/Wisconsin game.

Another week and another stunning upset! Shout it from the mountaintops! Northwestern upset No. 17 Wisconsin at Ryan Field Saturday. In another outstanding performance, the defense stepped up, the offense played well and Northwestern toppled a ranked team at home for the first time since 2010. It was also the ‘Cats first conference win at home since 2012. This team has made a huge turnaround. Only a few weeks ago they were 1-2, having looked terrible against Western Illinois, and seemingly not prepared for Big Ten play. But now, Northwestern stands alone not only at top the Big Ten West, but also atop the Big Ten at 2-0 in the Conference.  So let’s take a look at the statistics behind Northwestern’s victory over No. 17 Wisconsin.

Godwin Igwebuike forced not one, not two, but three interceptions against the Wisconsin Badgers. Igwebuike came up huge against Wisconsin and deservedly earned both the Big Ten Defensive Player and freshman of the Week. What a performance. Igwebuike’s turnovers were huge, two of them came in the end zone, preventing Wisconsin from coming away with points on two drives, while the other sealed the game for the ‘Cats.

Igwebuike’s three picks effectively changed the game. Without them, even if the ‘Cats held Wisconsin to field goals on those drives; it’s a tied game, rather than a 20-14 victory.

Godwin Igwebuike wasn’t the only Wildcat that had a big day, the special teams played a huge role in Northwestern’s win as well. Chris Gradone had four punts land inside the Wisconsin 20. Gradone’s first four punts pinned the Badgers at their own 6, 4, 9 and 6 yard lines. Gradone averaged 35.9 yards per punt and helped give the Badgers terrible field position throughout the day.

Overall, Wisconsin’s average field position was at their own 21 yard line, a full 12 yards worse than Northwestern. The ‘Cats special teams helped pin the Badgers deep in their own territory, forcing them to drive the length of the field.

Melvin Gordon III may have had 259 yards, but Justin Jackson wasn’t too shabby either, rushing for 162 yards of his own. Jackson averaged 4.9 yards a carry with a long of 18 yards. And he’s just a freshman, and not a redshirt freshman a true freshman. Rarely does Head Coach Pat Fitzgerald ever play freshman, usually opting to redshirt them, but Jackson and Solomon Vault, who didn’t play Saturday, have shown why Fitzgerald decided not to redshirt them. Jackson was rated by ESPN as a four-star recruit, given an 81 grade, fourth best among Northwestern’s 2014 recruiting class.

On the season Jackson leads them team with 396 rushing yards, averaging 4.4 yards per carry. And it cannot be stated enough, he’s just a freshman. I, along with the rest of the WNUR Sports staff, cannot wait to see what he does in the coming years.  He’s going to be good, really good.

Against the best red zone defense in the Big Ten, Northwestern got points all four times they got into the red zone. Wisconsin’s defense was allowing just over 14 points per game coming into Ryan Field, but the Wildcats were able to come away with 20 points –scoring every trip into the red zone.

Wisconsin quarterbacks were just 12 of 29 overall for 138 yards, an average of 11.5 yards per completed pass, and McEvoy was benched at halftime for Stave. Neither quarterback played well. McEvoy posted an 8.8 QBR, while Stave posted a 10.1 QBR. For those not familiar with ESPN’s QBR stat, you can find an explanation here (link: http://espn.go.com/nfl/story/_/id/6833215/explaining-statistics-total-quarterback-rating), but the basics are that it measures quarterback performance on a 0 to 100 scale. In other words both Wisconsin quarterbacks played abysmal Saturday.

One of my keys to the game in last week’s article was Northwestern needed to contain Tanner McEvoy and Melvin Gordon III. And for the most part, they succeeded. The Northwestern defense recorded 5.0 tackles for a loss of 10 total yards while limited McEvoy to one rush for eight yards before he was benched near the end of the first half.