Posted on October 10, 2014 by WNUR Sports Leave a comment 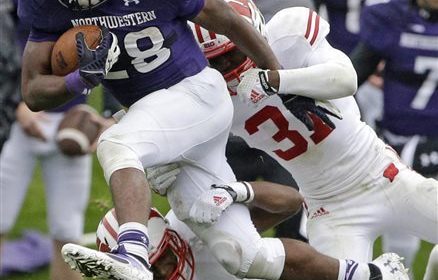 Cameron Songer (1 – 1) (@CameronSonger): Northwestern 24, Minnesota 7. The Wildcats’ defense is the real deal, and Minnesota doesn’t have a weapon like Melvin Gordon. On the other side, Northwestern’s offense has improved a ton in the past two or three weeks. The difference between this one being a comfortable win and a close win will be points from defense and special teams, so my player to watch is Miles Shuler. The last time Northwestern played at TCF Bank Stadium, a certain #5 had two touchdowns and 180 yards rushing. Shuler doesn’t need to put up those numbers, but it sure wouldn’t hurt if he did.

Ben Goren (3 – 1) (@BenG412): Since I’m on the broadcast, I’ll take the Herbie route and just give a what to watch for.  Player to Watch: Traveon Henry. Henry is going through a rough stretch right now.  His shaky angles to the ball carrier has seen him get exposed and at times look like he’s moving in quicksand.  David Cobb isn’t a speedster, so Henry can focus on what he does best: laying people out.

Nick Scoliard (1 – 3) (@NickScols): Northwestern 27 – Minnesota 20. This is not the team that played non-conference. I don’t know what Fitz added to their Gatorade, but these ‘Cats are playing on a different level in almost all facets – playcalling on both sides of the ball have been fantastic, they’ve been winning through their pass rush, and Siemian has been improving every game. I think they go into Minnesota and show the Big ten they mean business, and Leidner won’t be able to handle the defense all by himself. Players to Watch: Collin Ellis/Anthony Walker. I’m not sure who will get the majority of snaps, but look for the middle linebackers to be the key to stopping Cobb, forcing Leidner to pass, letting the defensive line do its thing.

Michael Stern (1 – 4) (@michaeljstern23): Northwestern 14, Minnesota 13. This game will be a struggle. It’s a trap game for the Wildcats, coming off an upset win over Wisconsin and looking ahead to homecoming, new uniforms, and Nebraska. The offense does just enough, while the defense bends but holds the Gophers down in the red zone. Player to watch: Treyvon Green. What is Green’s role now that Justin Jackson has taken over as the top rushing option? I think Green will be called upon to pick up tough yards on third and short in key situations.

Ryan Fish(1 – 3) (@RyanMFish): Northwestern 21, Minnesota 20. The ‘Cats are starting to find their way after a rough start to the season. They deserve to be confident, but winning in Minneapolis will not be easy, even against the Gophers’ weak passing game. I think this one will go down to the wire. Player to watch: Trevor Siemian. He wasn’t flashy, but he took care of the ball and made good throws in key moments against the Badgers; if he does that again, he can put the ‘Cats in a position to win.

Jacob Murphey (1 – 2) (@jacobmurphey22): Northwestern 24, Minnesota 20: On the road and facing a formidable defense, the Wildcats come out slow in the first half. Down by two scores entering the third quarter, the run game gets going and Northwestern scores a touchdown with under two left in the game to win (hey, the ‘Cats can win heartbreakers too!). Player to Watch: Justin Jackson. Can he take his impressive performance from last week on the road? He’ll have to if the ‘Cats want to make it 3-0 in the B1G.

Ari Ross (1 – 4) (@aross50): Northwestern 21-13. This could easily be a statement game for Northwestern, going on the road against an inferior team. Minnesota’s a poor man’s Wisconsin: they have a decent, not great, running game, little to no passing offense and an decent defense. They’re a team Northwestern should beat as long as they continue to play well. On the road, the Golden Gophers keep the game close, but the ‘Cats pull away at the end.  Player to Watch: Dean Lowry, DL, Northwestern. The key to this game will be Northwestern’s defense stopping the Gophers rushing attack and forcing them into third and long situations. That starts with Lowry who had 4.0 tackles for a loss and 3.5 sacks this year. If the d-line can wreak havoc on Minnesota’s O-line the ‘Cats should be able to come out of TCF Bank Stadium with a win.

Erik Bremer (0 – 0) (@Erik_Bremer): 20-17 Wildcats. The Golden Gophers should be well-rested coming off their bye, but Northwestern has proven that they can stop a potent rushing attack.  Minnesota is even more one-dimensional than Wisconsin, and the Wildcats defense did enough last week against the Badgers to convince me that they’re capable of doing it again on the road. Player to watch: Trevor Siemian. Siemian has improved week-by-week, and so have his receivers.  If he operates at full strength, the rest of the field opens up for Justin Jackson to do his thing.

Lorenzo Gudino (0 – 0) (@LorenZo_Gudino): Northwestern 24, Minnesota 21. With momentum and gusto rolling over from last week’s win, the Wildcats will have the edge in this one. Even though Minnesota has been putting up big numbers offensively for most of the season, Northwestern’s defense will keep them in check. If Siemian leads the Northwestern offense like he can, the ‘Cats will come back to Evanston with a W. Player to Watch: Trevor Siemian, Northwestern University, QB. With the running game and defense excelling as of late, it would be great to see Siemian take full control of this game.

Ian McCafferty (0 – 1) (@Itmccaf52): 21-10 Northwestern. This game has the possibility of being a trap game, as NU is coming off a huge win against Wisconsin and looking ahead to the Homecoming Game against Nebraska. However, Minnesota’s offense has been somewhat mediocre this season, only averaging 113.2 passing yards per game. So similar to the Wisconsin game, NU simply needs to slow down the rushing game. The NU defense should be able to keep Minnesota in check, and the offense will do enough to win. Player to Watch: Justin Jackson, RB, Northwestern. Jackson was a huge part of the win against Wisconsin, rushing 33 times for 162 yards. Northwestern will once again need to rely on the freshman to help control the flow of the game, and gain another road win.

Josh Burton (0 – 1) (@josh_burton1): Northwestern 24, Minnesota 17. Minnesota may be 4-1 overall (1-0 in the B1G with a win over Michigan) but outside of a loss to TCU, the Golden Gophers haven’t faced a really tough opponent yet this year. Northwestern is riding high off two convincing B1G wins and should be able to ride its defense to a win. Player to watch: Trevor Siemian. Siemian didn’t exactly light up the scoreboard against Wisconsin, but he managed a good enough game for the ‘Cats to win. If he can do that–without any turnovers–then Northwestern has a great chance in this one.

Josh  Glicksman(0 – 0) (@JoshGlicksman): ‘Cats win 24-13. Minnesota is merely a less talented Wisconsin, so if Northwestern is able to prevent the long TD run from David Cobb, they should be ok. My player to watch is Dan Vitale. The Golden Gophers rank 31st in rush defense compared to 43rd in pass defense, so look for Siemian to air it out like he did vs. Wisconsin. Since Minnesota has 8 INTs on the year (tied with Northwestern for second in the Big Ten), expect Siemian to avoid the big match-ups and look to check down with Vitale.

Zach Pereles (0 – 2) (@zach_pereles):  Northwestern 23 – Minnesota 14. This is a major trap game for the Cats, who travel to Minnesota (not an easy place to play) against a not-too-shabby Golden Gopher team. Regardless, Northwestern’s opportunistic defense and another strong performance by emerging star running back Justin Jackson should do the trick as visitors will leave the Twin Cities with a 3-0 record in the Big Ten. Player to Watch: Justin Jackson. If he can come anywhere near a repeat performance from the Wisconsin game, the Wildcats shouldn’t have much to worry about in this game. If he cannot, this one could be a nailbiter.