Posted on October 11, 2014 by WNUR Sports Leave a comment 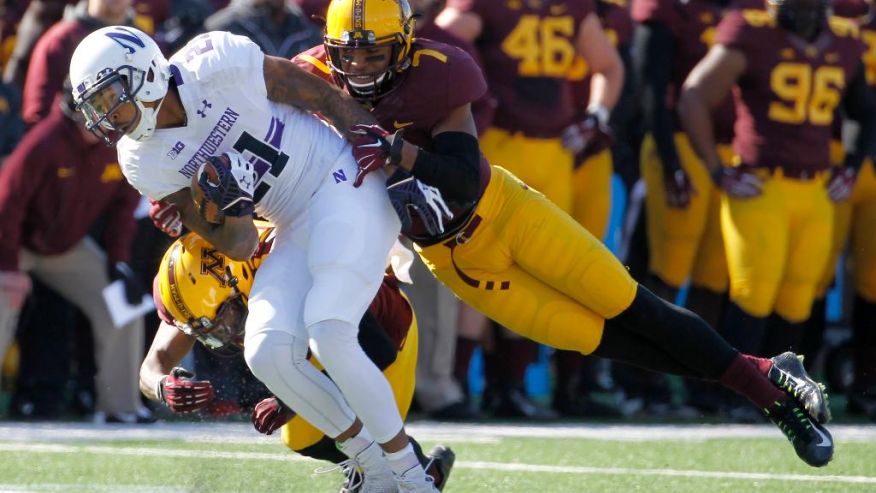 Kyle Prater caught this pass in front of Minnesota’s Damarius Travis, but Prater had a key drop on fourth down and Travis intercepted a late Hail Mary as the Gophers beat Northwestern. Photo credit: Ann Heisenfelt, AP

Minnesota (5-1, 2-0 Big Ten) beat Northwestern (3-3, 2-1 Big Ten) for the second straight year and are in good position to claim the Big Ten’s West Division.  The Golden Gophers have won 6 of their last 8 conference games, the best stretch for the program in 40 years.

The Wildcats held explosive running back David Cobb to 97 yards on 30 carries, but Myrick’s 100 yard return in the fourth quarter gave the Golden Gophers a lead that proved to be the difference in the game.

Myrick’s return touchdown came just after Northwestern had gone 97 yards for a game-tying touchdown with just over 7 minutes to play.  Solomon Vault’s dropped kick return pinned the Wildcats deep within their own territory, but quarterback Trevor Siemian went 5 of 9 for 55 yards to bring the ball inside the red zone.  After an incompletion on third-and-goal from the Minnesota 10, a roughing the passer penalty on Briean Boddy-Calhoun and an unsportsmanlike conduct penalty on coach Jerry Kill gave Northwestern another opportunity.

Siemian rolled into the end zone from 2 yards out, evening the score at 17.  But Northwestern’s special teams unit failed to cover Myrick, who went virtually untouched from end zone to end zone in 13 seconds for his second kickoff return in three weeks.

The Wildcats had opportunities to send the game into overtime, but all three drives after Myrick’s touchdown failed to produce a score.  A last-second desperation throw from Northwestern’s own 44-yard line was intercepted just short of the end zone by Damarius Travis as time expired.

Despite the game-ending pick, Siemian had a big day for the Wildcats. He completed 32 of 50 passes for 269 yards, accounting for 14 points with a touchdown passing and rushing.

Running back Justin Jackson, coming off a breakout performance against the Wisconsin Badgers last week, rushed for 106 yards on 23 carries.  Northwestern abandoned the running game as time dwindled away in the fourth quarter, instead opting to throw the ball in order to save time.

Minnesota quarterback Mitch Leidner finished 10 of 15 with 153 yards passing and 1 interception.  Leidner’s ability to run the ball proved vital to the Golden Gopher offense, rushing for 31 yards and 2 touchdowns.

Northwestern heads home to face Nebraska next Saturday for Homecoming before their final bye week of the season.  Minnesota faces Purdue next week before heading to Illinois on October 25.

Odds and Ends:  Myrick’s kickoff return was the first 100 yard return for the Golden Gophers since 2000, and just the fourth in program history … Northwestern right tackle Eric Olson committed three penalties, one for holding late in the fourth quarter and two in the first quarter for lining up too far behind the line of scrimmage … Minnesota figures to be heavily favored against Purdue and Illinois, but they will have to face Iowa, Ohio State, Nebraska, and Wisconsin in the final four weeks of the season … Northwestern’s longest play was a 21-yard pass to Justin Jackson in the fourth quarter.  The running back finished with 4 catches for 50 yards receiving … Minnesota debuted their new yellow helmets, worn with yellow pants and a maroon jersey.  Northwestern wore white from head to toe … Two weeks after a shaky performance, kicker Jack Mitchell knocked in a 19 yard field goal and was 2 for 2 in extra points … As soon as the Gophers game ended, field staff began work converting TCF Bank Stadium to its NFL configuration for the Minnesota Vikings game Sunday.