Breaking Down Northwestern’s Loss at Minnesota

Posted on October 13, 2014 by WNUR Sports Leave a comment 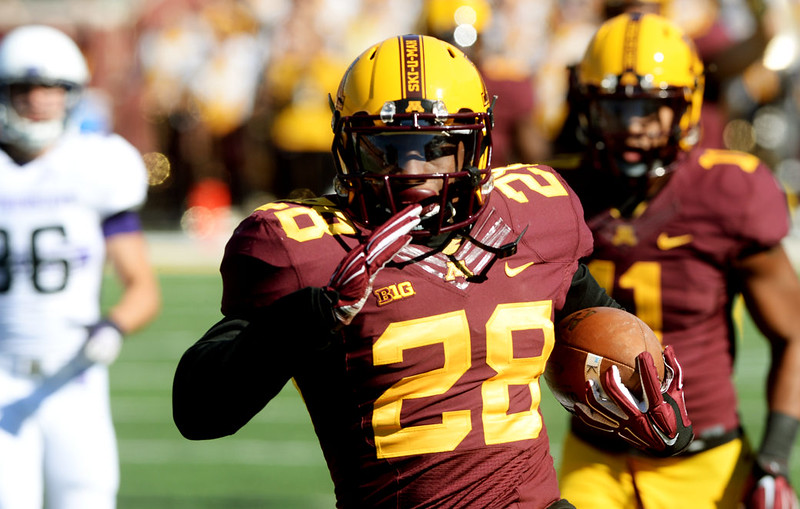 Not-so-Special Teams: Largely considered a strength because of their performances in past games, Northwestern’s special teams let the Wildcats down this weekend. After the Wildcats tied the game at 17 apiece in the fourth quarter, Jack Mitchell kicked the ball off to Minnesota kick-returner Jalen Myrick. The ‘Cats left an entire side of the field open, and Myrick took advantage, running the kickoff 100 yards for the deciding score. Myrick’s return followed Northwestern’s 97-yard, game-tying drive, which made it more deflating. Furthermore, punter Chris Gradone shanked a punt for eleven yards late in the game, costing NU precious field position and a legitimate chance at a comeback. All around, it was a very poor performance for Wildcat special teams.

Lights, Camera, Play-Action!: The NU defense struggled mightily with Minnesota’s play-action passes. Focused on containing Gopher running back David Cobb, Northwestern left wide receivers open downfield whenever Minnesota quarterback Mitch Leidner faked a handoff to Cobb. Wildcat defensive backs played off their receivers, instead of trying to jam them at the line of scrimmage. Leidner only completed ten passes, but he finished with 153 passing yards. Northwestern allowed an average of 15.3 yards per completion, inexcusable against a team like Minnesota that lacks a strong passing game.

Low Cobb Diet: After struggling to contain Heisman candidate Melvin Gordon last weekend, the Wildcats fared much better against Minnesota running back David Cobb on Saturday. Cobb averaged fewer than five yards per carry for only the second time this season as Northwestern held the back to 97 yards on 30 carries (3.2 yards per carry). Cobb also failed to average more than five yards a carry against TCU in September, and any time the Wildcats and Horned Frogs are mentioned in the same sentence is a good thing for Northwestern.

Not From Concentrate: Freshman running back Justin “Juicy-J” Jackson went off yet again, further establishing himself as the Wildcats’ every-down back. Building off his success against Wisconsin last weekend, Jackson carried the rock twenty-three times for 106 yards, and added four catches for 50 yards and a score. Jackson has become the centerpiece of Northwestern’s offense, and the ‘Cats will need to lean on him to stay in contention in the Big Ten West. If Jackson can put up similar numbers from the last two games for the rest of the season, NU might have a fighting chance.

Trevor Football: Northwestern’s 97 yard drive in the fourth quarter which tied the game at 17 was possibly the best drive the Wildcats have put together all season long. Northwestern started at their own three after Solomon Vault muffed a kickoff and the ball landed out of bounds – another special teams miscue. Quarterback Trevor Siemian then marched the ‘Cats down the field, capping off the drive with a two yard rushing touchdown. Some questioned the decision to run a quarterback sneak from the two (myself included), but it ended up working out.

Still Going Four It: Northwestern’s success on fourth downs continued in Saturday’s game. Overall, they were 2-for-3 on fourth down against Minnesota. The first fourth down that the ‘Cats converted came on a first-half touchdown drive, while the second occurred after Myrick’s return touchdown. Down seven points and trying to make a miraculous comeback, Siemian connected with receiver Kyle Prater and kept the drive alive. However, the comeback bid ended four plays later, when Siemian and Prater were unable to connect on a 4th-and-three. This type of aggressive playcalling has been Pat Fitzgerald’s trademark  this season.

What’s Next: In Northwestern’s homecoming game, the Wildcats will wear special black gothic-style uniforms and welcome the 19th-ranked Nebraska Cornhuskers (5-1, 1-1 in Big Ten play) to town. Nebraska’s senior running back Ameer Abdullah is fourth in the FBS in rushing yards, and presents another challenge for the Northwestern defense.