Posted on October 14, 2014 by WNUR Sports Leave a comment

WNUR’s Ari Ross (@aross50)  breaks down some stats from Northwestern’s game against Minnesota.

What goes up must come down. After three straight wins, the Northwestern Wildcats fell back down to earth, losing to the Minnesota Golden Gophers 24-17. The Wildcats trudged into TCF Bank Stadium full of hope, but left with a loss after Jalen Myrick’s 100 yard kick return for a touchdown. After three weeks riding on high, it’s a draining loss, a tough loss. The ‘Cats just didn’t play well enough to win. So let’s take a look at the stats that did them in against the Golden Gophers. 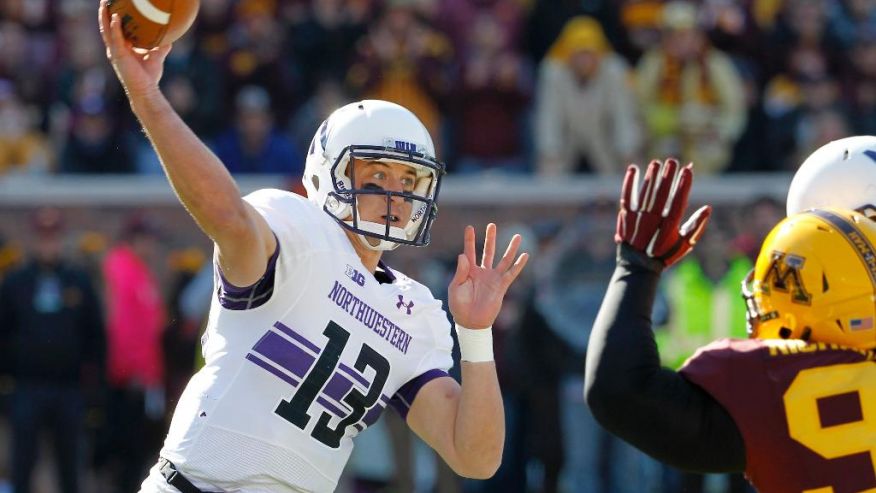 Northwestern’s longest play of the day was 21 yards, a pass from Trevor Siemian to Justin Jackson. That’s just not going to do it against one of the better defensives in the Big Ten. Northwestern has to make big plays when it counts, and they didn’t, while the Golden Gophers did. Mitch Leidner had a 22-yard run and a 55-yard pass. The Gophers made the big plays, while the ‘Cats didn’t.

Overall, Northwestern averaged 4.7 yard per play, which isn’t going to get it done. Against Wisconsin, they averaged 5.1 yard per play. Northwestern needed to move the ball down the field in large chunks, rather than picking up two or three yards per play, putting them in third and long situations. Northwestern was just 7 of 17 on third down. Against a good Minnesota defense, not having big plays did them in.

Northwestern and Minnesota each intercepted a pass, although the Gopher’s came at the end of regulation on Siemian’s Hail Mary. Nick Van Hoose had Northwestern’s only turnover of the day, an interception that gave the ‘Cats good field position, but they were able to do nothing with it. Northwestern went three and out after the turnover. Unlike previous weeks, Northwestern was not able to get points off of turnovers.

Minnesota’s commits very few turnovers, with a +6 turnover margin, averaging one per game, and the Wildcats needed to make it count. But instead they just went three and out, giving Minnesota the ball back in the third quarter.

Northwestern committed six penalties for 41 yards. Overall Northwestern played a pretty disciplined game, but the penalties really hurt. Twice the ‘Cats had big offensive plays called back due to illegal formation penalties on the offensive line. One would have been a 39-yard gain. Time and time again throughout the game, Northwestern’s negative plays on offense would stall the drive and eventually force a punt. Whether it was a penalty, sack, dropped pass or other fundamental miscue, negative offensive plays really hurt the ‘Cats offensive rhythm.

On the defensive side of the ball, the one personal foul call on Leidner’s 52-yard pass to Maxx Williams set up the Golden Gophers second touchdown of the first half. The defense played a pretty clean game, but the one penalty, set Minnesota up in the red zone for an easy score.

After a great week against Wisconsin, Chris Gradone had a poor day against the Gophers. Gradone averaged just 33.3-yards per punt, with a net of 32.5-yards and just one punt inside the 20. While Northwestern’s average field position was their own 21-yard line, the Gophers average field position was at their own 38-yard line. The Golden Gophers continuously played with a short field, while ‘Cats had to go the length of the field to score.

And the special teams as a whole played a very poor game, most notably being the 100-yard kickoff return, the go-ahead touchdown for the Gophers. On punt returns, Northwestern averaged 0.0 yards, and just 15.0 yards on kickoff returns. Northwestern’s best drive was set up when Solomon Vault fumbled the kickoff out of bounds at the three-yard line. Special Teams miscues all over the field really hurt the ‘Cats on Saturday and cost them the game.

While the ‘Cats did lose to the Gophers on Saturday, there were some bright spots. Justin Jackson again rushed for over 100 yards, while catching four passes for 50 yards and a touchdown. Jackson had another spectacular game, averaging 4.6-yards per carry, and was named the Big Ten Freshman of the Week, the third Wildcat in a row to earn that honor. Jackson has a bright future as he continues to improve and play well week in and week out.

In what was probably the best drive of the year so far, Trevor Siemian led the ‘Cats, down 17-10 with just over 12 minutes left in the fourth quarter, on a 97-yard drive, starting at their own three yard line, to the end zone to tie the game at 17. Siemian threw passes of 11, 11, 12, 13 and 13 yards to five different receivers as the ‘Cats marched down the field and scored, with the help of a few Minnesota penalties, including roughing the passer on third and goal.

Looking forward to next Saturday, as Ameer Abdullah the Nebraska Cornhuskers look to crash Northwestern’s homecoming game, Northwestern will need to play better on all sides of the ball in order to come away with a victory. A primetime game, Coach Fitz will be sure to have his team pumped and ready, but they’ll need to leave it all on the field to beat one of the best teams in the Big Ten. Abdullah, like Melvin Gordon III, is a Heisman candidate rusher, and Nebraska has a great defense and quarterback to back him up. The ‘Cats will have their hands full, but if they can like they did against Penn State and Wisconsin, a stout defensive performance along with a good, clean offensive performance, they should be able to pull out a win at Ryan Field.