Breaking Down Northwestern’s Loss to Nebraska

Posted on October 20, 2014 by WNUR Sports Leave a comment 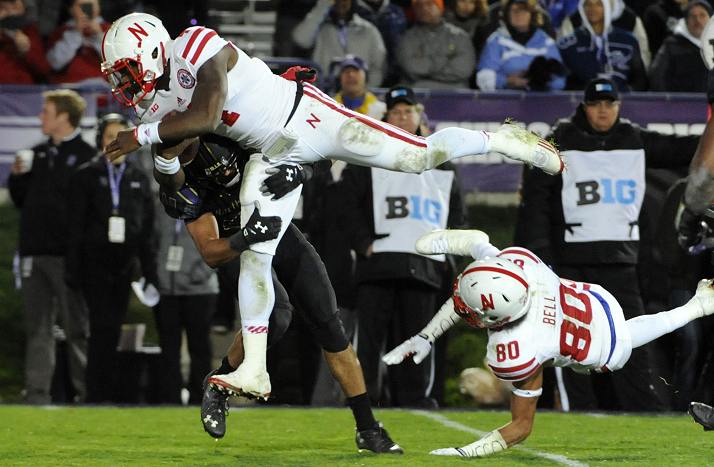 Nebraska quarterback Tommy Armstrong, Jr. did not reach the end zone on this run, but running back Ameer Abdullah punched it in on the next play as Nebraska dominated the second half against Northwestern. Photo credit: David Banks, USA Today.

Aww, Shucks!: Northwestern was outplayed in every way by those Huskers of Corn. The Wildcats were outgained on the ground at a 2:1 ratio, rushing for 117 yards against Nebraska’s 234. In the passing game, the Cornhuskers threw for 237 yards compared to 173 for the ‘Cats. Nebraska was more efficient on third down, converting on eight of fifteen chances (53%) while Northwestern only managed a five-for-sixteen (31%) rate. The Cornhuskers possessed the ball for longer, holding the ball for almost thirty-three minutes, and Northwestern had the only turnover of the game. Nebraska completely dominated the Wildcats, and earned a slight boost in the AP rankings as a result, moving up from 19th to 16th.

“No More Half Measures”: For much of the first half, Northwestern kept the game close. The Wildcats were the first to put points on the board, and even led the Cornhuskers 17-14 at the half. However, the game went downhill for the Cats after the break. The Trevor Siemian-led offense completely stalled once the third quarter began, with the Wildcats going three and out on four of their six second half drives. Additionally, Northwestern only gained thirty yards on offense in the second half, eight of which came on an offensive pass interference by Nebraska late in the fourth quarter. The other seven plays of that drive? Siemian went 1-for-7 for six yards. Northwestern needs to play competitively for all four quarters if they want to beat good teams like Nebraska, and ultimately were unable to do so on Saturday.

Maize Runner: The Wildcats faced a top running back for the third straight week, and needed another strong gameplan to stop senior Ameer Abdullah. Abdullah came into the game averaging 146.3 rush yards per game, fourth in the country. Northwestern did a decent job containing Abdullah until the fourth quarter, when he burst out for a 50 yard gain. Abdullah also found the end zone four times in this game, a new career high. Oddly, all of Abdullah’s touchdowns came on one yard runs, a coincidence that Northwestern is probably ashamed of. The Wildcats had best make use of their off week, because their defense needs some rest.

Extra Juice: Wildcat freshman running back Justin Jackson turned in his third straight solid performance on Saturday. On the heels of two straight 100+ yard performances, Jackson kept on rolling against the Cornhuskers. Jackson finished the game with 22 carries for 128 yards on the ground, and hit paydirt twice, once running and once receiving. Whenever the Wildcats needed a big play, they turned to Jackson, a sign that the freshman is establishing himself as Northwestern’s every down back and offensive playmaker. The next couple years look hopeful with Jackson receiving the handoffs and continuing to improve his skills.

Undefeated Like Shuler: A scary moment for the Wildcats occurred towards the end of the third quarter. Junior wide receiver Miles Shuler took a huge shot after making a six yard catch, and left the field on a stretcher. Shuler was taken to a nearby hospital, but gave the crowd the thumbs-up sign as he left the field. A silent stadium erupted in cheers, and Shuler thankfully was discharged from the hospital Sunday afternoon.

What’s Next: After a week off this upcoming Saturday, the 3-4 Wildcats will travel to Iowa to face the 5-2 Hawkeyes. Iowa was upset by Big Ten rookie Maryland, and looks to become bowl eligible against Northwestern in two weeks.