Posted on October 31, 2014 by WNUR Sports Leave a comment

WNUR’s staff has been in a season-long losing streak. Do they pick the Wildcats to snap their three-game skid in Iowa City?

Last year: The Hawkeyes held off Northwestern, 17-10 in overtime.

Game time is 11 AM. You can watch on Big Ten Network, and listen right here on wnursports.com 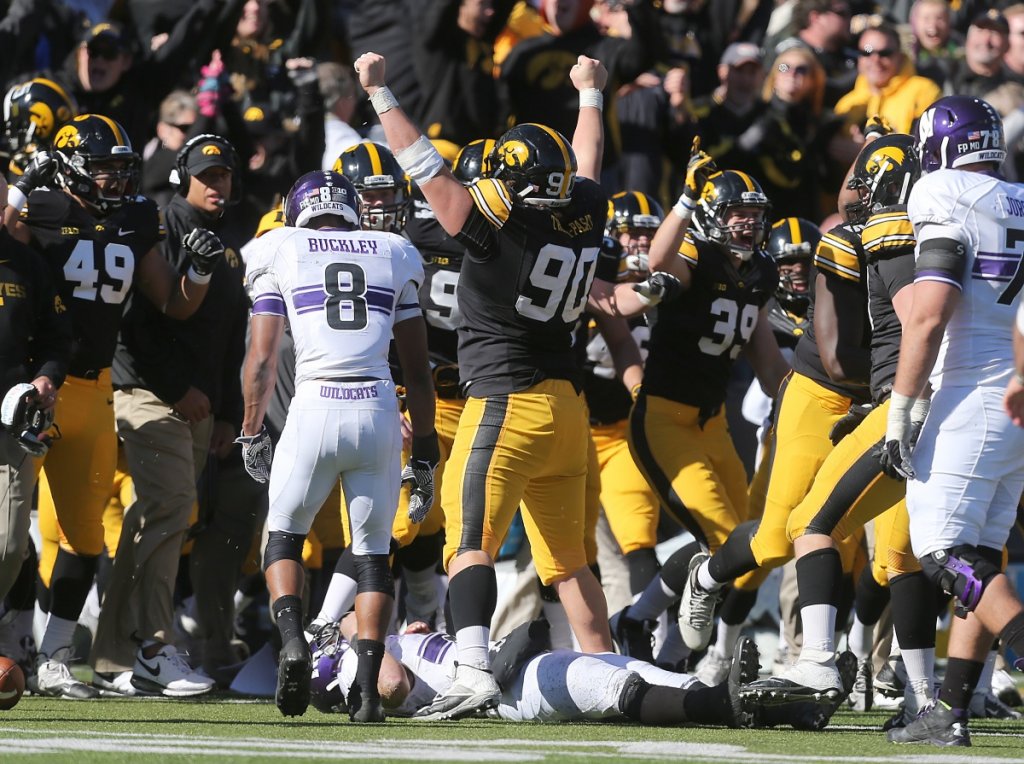 Last year’s game in Iowa City ended with Kain Colter on the ground in overtime. Can the ‘Cats get revenge Saturday, and snap a three-game losing streak in the process? Photo credit: Byron Houlgrave, Des Moines Register.

It’s never easy to win on the road in the big ten. However, Northwestern will establish the ground game early and control the tempo despite being away from their home.

Player to watch: Justin Jackson. Without successful power running from JJ, the ‘Cats will struggle offensively. The freshman must grind out yards in a physical Big Ten matchup for a Northwestern to get the win.

NU has, as seen in the last few weeks, had serious trouble with elite running backs. Thankfully, Iowa doesn’t really have an explosive one (Mark Weisman isn’t that type of runner) which should allow the Cats’ defense to focus on pressuring the quarterback and defending the pass effectively.

Player to watch: Jack Marshall. This game is probably going to be a close one, and it may come down to a field goal or extra point. If that’s the case, Marshall needs to come through.

We learned a lot about Northwestern in the second half of their loss to Nebraska. Unfortunately, most of the things we learned were not good. Iowa isn’t as good as Nebraska, but they’re good enough to win at home here.

Player to watch: Kyle Prater. The 6’6″ former five-star wide receiver has the tools to swing a Big Ten contest at some point. It would be nice if it happened this week.

Both teams are coming off bye weeks, and both teams lost the week before that. Iowa will especially be looking to rebound after blowing a chance to win the Big Ten West by losing to a poor Maryland team. Backed by their home crowd, the Hawkeyes will win a close one as Northwestern’s inability to score touchdowns in the redzone will continue.

Player to watch: Dan Vitale. When Vitale is involved, the Wildcats are a much better offense than when he is not. Vitale has reliable hands, is good after the catch, and is a good target in the redzone. Northwestern needs to get him the ball if they want to win.

This is a winnable game for Northwestern, but I don’t have enough faith in the offense to pick them this week. Hopefully, they prove me wrong.

Player to watch: Trevor Siemian. Pat Fitzgerald said the bye week helped Siemian rest his ailing ankle a little more, but Saturday will show how comfortable he really is. While the struggles are not entirely his fault, he needs to manage the offense much better than he did against Nebraska for the ‘Cats to win this one.

Iowa isn’t that good.  They throw the ball too much and do so inefficiently.  Sound like any other team you know of?  Gimme a 21-17 Northwestern win.  My ceaseless optimism continues.

Player to Watch: Traveon Henry. He’s gonna be playing close to the line of scrimmage, much like he did against Nebraska and Wisconsin, only this time, the running back he’s facing can’t run away from him.  Expect Henry to put a couple of punishing hits on Mr. Weisman.

I had a dream in my friend’s dorm room at Penn State that Hackenberg’s pick six and NU’s early 14-0 lead would give NU a shocking road upset. I’m predicting the same thing here. Expect Iowa to put up a bit more of a fight than PSU, but I see Northwestern coming away with another #B1G road win.

Player to watch: Trevor Siemian. This game (and the rest of NU’s season) hinges on whether or not his hinges (i.e. his ankle) are healthy.

For the first time in four games, Northwestern will not have to go up against one of the top ten running backs in the nation. Iowa’s offense is average at best, so the Wildcats should have no problem holding them down. The Northwestern offense will have to rebound after an atrocious second half against Nebraska. The NU defense will play well, and the offense will do just enough to win.

Player to Watch: Justin Jackson, RB, Northwestern. Iowa’s defense gives up 142 rushing yards per game, which is 41st in the nation. Jackson has had big days against much better defenses in Wisconsin and Nebraska, so look for him to continue his hot stretch and have another big game on Saturday.

Kinnick Stadium is a tough place to play. A worse Iowa team beat a better Northwestern team here last year, and the Hawkeyes are also coming off a bye week, so NU has no advantage there.

Player to Watch: Kevonte Martin-Manley, Iowa. The Wildcat secondary must cover Martin-Manley closely. He leads the Hawkeyes in receptions and can turn a short pass into a big gainer.