Breaking Down Northwestern’s Loss at Iowa

Posted on November 3, 2014 by WNUR Sports Leave a comment

Domesticated Cats: This loss was just flat out ugly. Northwestern 1) gave up 24 points in the first quarter, 2) managed only 180 total yards, 3) averaged less than three yards per play, 4) converted only four out of fifteen third downs, and 5) punted on eight of their drives. Oh, and they also lost by 41 points. There’s really not much to say about the Wildcats’ performance other than they got utterly embarrassed against a Hawkeyes team that they usually beat. Coach Pat Fitzgerald will not let his players forget this one, that’s for sure.

Siemian Benched: With the Wildcats well behind early in the fourth quarter, Fitzgerald made the decision to pull senior quarterback Trevor Siemian from the game and replace him with junior Zack Oliver. Siemian, who has struggled mightily all season, completed only 8-of-18 passes on the day for 68 yards. Oliver didn’t provide much in relief, going 1-of-6 for merely seven yards, however his appearance in the game was the realization of many fans’ dreams – seeing Siemian yanked. While it was unclear whether or not Siemian was benched because of his poor play or because Northwestern was trailing by so much, it’s become obvious that Siemian may be in jeopardy of losing his starting job.

Diamond in the Rough: The only (and I do mean only) bright spot in Iowa’s drubbing of Northwestern was the continued strong play by freshman running back Justin Jackson. Finishing with 96 yards on 24 carries and a touchdown, Jackson snapped his three game streak of 100-plus rush yards, but he still accounted for more than half of the Wildcats’ offense on Saturday. With the season practically over for Northwestern, they should look to play Jackson as much as possible and get him reps in preparation for 2015 and beyond. 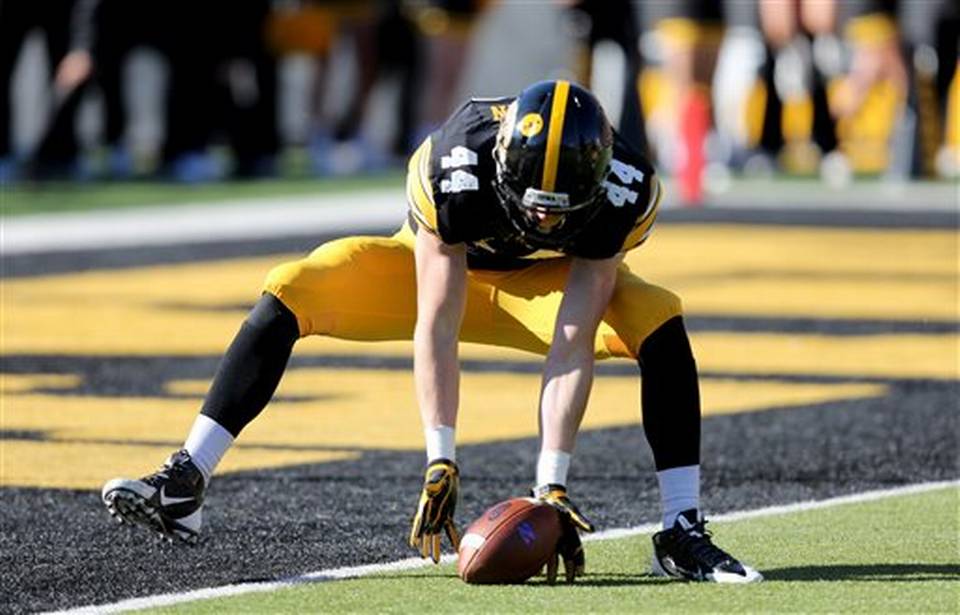 Iowa’s Ben Niemann falls on a punt in the end zone Saturday against Northwestern with no Wildcats in sight. Everything was pretty much this easy for the Hawkeyes, who rolled past Northwestern. Photo credit: Justin Hayworth, AP.

Domesticated Cats, Part II: Some other points worth mentioning about Saturday’s game include: 1) the Wildcat defense gave up 483 total yards against a mediocre Hawkeyes offense, Iowa’s largest single-game yardage total since their game against Purdue last November, 2) Northwestern is now on a three game losing streak after appearing to turn a corner earlier this season when they upset Wisconsin at home, and 3) the loss drops the Wildcats to two games behind first place Nebraska. With only four games remaining, Northwestern’s chances of a Big Ten West title are slim to none.

May Cause Drowsiness: Northwestern’s lack of offense really made the game boring to watch. Coupled with the fact that Iowa completely blew the Wildcats out of the water, a game that some expected to be close and exciting ended up a snoozer. Pro-tip: when introducing non-Americans to American Football, do not use show them this game.

What’s Next: The Michigan Wolverines (4-5, 2-3 in Big Ten) visit Ryan Field this Saturday, November 8th. Northwestern lost last year’s matchup 27-19 in triple overtime in what was part of a seven game losing streak that crushed the Wildcats’ 2013 season. Michigan athletic director Dave Brandon resigned last week, and the Wovlerines, who are tied with Northwestern for last in the Big Ten with 330 offensive yards per game, responded with a win against Indiana.