Northwestern takes on Notre Dame Saturday in South Bend, Indiana. The game will be the first meeting between the schools separated by 114 miles since September 2, 1995, when Pat Fitzgerald led the Wildcats to a 17-15 win in South Bend. Let’s take a closer look at the match-up:

When Notre Dame has the ball:

What’s the reason for the improvement? Quarterback Everett Golson, who led the Irish to the BCS national title game in 2012, is back after a one-year suspension due to an academic violation. Golson has thrown for 2,757 yards and 24 touchdowns this season, and leads the Irish with seven rushing touchdowns. When Golson chooses to hand the ball off, sophomore Tarean Folston is the every-down back and averages five yards per carry. Senior Cam McDaniel excels in short-yardage situations, and his four touchdowns are the most of any Notre Dame running back this season.

Golson has plenty of young options out wide as well. Sophomore William Fuller has emerged as Golson’s go-to receiver. Fuller leads the team with 52 receptions and 10 receiving touchdowns, and has caught a touchdown pass in all of Notre Dame’s games this season except the Stanford game on October 4th. Corey Robinson, son of NBA legend David Robinson, has become Golson’s red zone target. The six foot, four inch sophomore ranks second on the team with 32 receptions and four receiving touchdowns. Robinson had his biggest game of the year against Florida State, where his last-second touchdown catch was disallowed due to an offensive pass interference penalty. Senior tight end Ben Koyack is the elder statesman of the receiving core, and contributes just under 30 receiving yards per game.

The top priorities for Northwestern’s defense should be preventing the deep pass to Fuller and keeping Golson in the pocket, although both of these tasks are much easier said than done.

When Northwestern has the ball:

A senior linebacker with a nose for the football who often finds himself in the right place at the right time leads the Notre Dame defense. Joe Schmidt, not Manti Teo, is the man in the middle for the Irish this season. The senior from Southern California football powerhouse Mater Dei high school has contributed 65 tackles, two interceptions, and two forced fumbles this season. Sophomore Jaylon Smith has played well alongside Schmidt, recording 67 tackles, two sacks, and 6.5 tackles for loss.

On the defensive line, junior Sheldon Day and sophomore Isaac Rochell get after the quarterback, with nine and eight quarterback hurries respectively. However, defensive lineman Romeo Okwara and blitzing defensive back Matthias Farley are tied for the team lead with 3.5 sacks. Junior safety Elijah Shumate and his sophomore counterpart Max Redfield come down field well in run support, as each has recorded 48 tackles this season.

The Irish defense might be tough for Northwestern to attack, especially given the team’s recent offensive line struggles. Notre Dame’s rush defense ranks on par with Minnesota’s in terms of yards allowed per game, so Justin Jackson should be able to find some running room. Trevor Siemian should have time to throw as well, but must be careful, as the Irish are tied for 11th in the country with 13 interceptions this season. 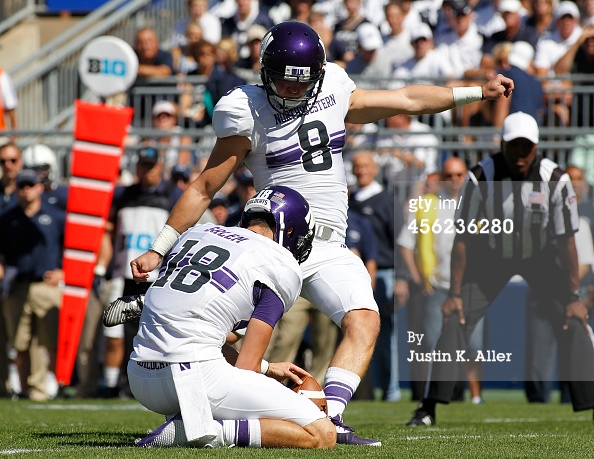 Senior Kyle Brindza handles kicking and punting duties for the Irish, so he has the trust of the coaching staff. That being said, Brindza has struggled at times this season, and is 11 for 17 on field goals this year, including two missed field goals from 40-plus yards against Navy. Northwestern kicker Jack Mitchell, meanwhile, has attempted only one field goal from beyond 40 yards this season, which he missed. In fact, Mitchell’s miss Saturday against Michigan was his first attempt of the season from between 30 and 39 yards. Mitchell is a perfect eight-for-eight from inside 30 yards on the year.

The Irish seem to play to the level of their opponent. Opponents have outscored Notre Dame 66-59 in the first quarter this season, and the Irish’s last three wins are all by ten points are less, even though two of those have come against un-ranked teams.

I expect Northwestern to hang around for a while and find themselves within one score after three quarters. However, the Irish are the better team, and will pull away with a couple late garbage time touchdowns. Notre Dame 30, Northwestern 10.