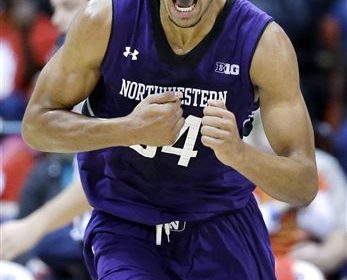 WNUR’s Austin Miller (@Austin_james906) gives you the game-by-game rundown of Northwestern men’s basketball’s non-conference schedule for the 2014-2015 season. Which games can Wildcat fans mark down as wins, and which will be classic non-conference nail-biters? Austin breaks down every match-up, starting with Friday’s season opener against Houston Baptist. 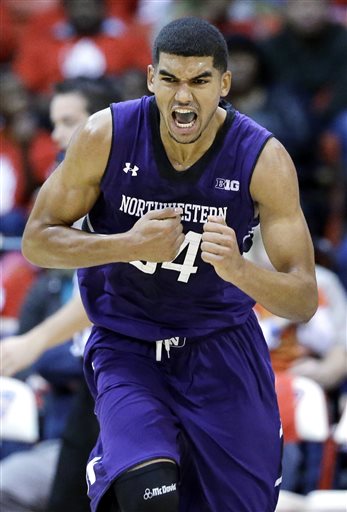 Which games on Northwestern’s non-conference schedule will make Sanjay Lumpkin give himself a fist-bump in excitement? Photo Credit: Nam Y. Huh, AP.

In his first season as Northwestern coach, Chris Collins spent the majority of the non-conference schedule trying to instill an up-tempo style of play that resulted in a number of growing pains. Now, in his second season as coach, Collins will use this non-conference schedule to pick up some easy wins before the gauntlet that is Big Ten play. In this post, I’ll look at each opponent Northwestern will face, offer a brief scouting report, some analysis, and rate the winnability of each game on a scale of 1-5.

The Huskies finished last season, their first in the Southland Conference, at 6-25. Junior guard Rob Lewis is the only player who averaged double figures last season, scoring just a paltry 12.8 PPG. Ken Pomeroy’s tempo-adjusted rankings weren’t kind to the Huskies, as HBU finished 344 out of 351 Division I teams last season. The outlook for this season isn’t much better, as the Huskies finished dead last in the preseason coaches’ poll in the Southland Conference. Northwestern should have no trouble in this contest, getting the ‘Cats off to a 1-0 start.

Brown returns 7 of their 8 leading scorers from last year, however their one loss could be huge. Gone is Sean McGonagill and his 17.4 PPG, leaving behind a slew of Bears, none of which averaged double figure points last season. This game could be an early test for the continued development of Northwestern center Alex Olah, as Rafael Maia, a 6-9 center from Brazil averaged 8.1 boards a game last season. As one of only two true road games on the non-conference schedule, this should be a solid, but winnable early test for the Cats.

North Florida returns two of the top three scorers from a team that notched a regular season sweep of giant-killers Mercer. The Ospreys overall record will once again be affected by the large number of non-conference road games, this year North Florida will travel to Purdue, Florida State, Iowa and Alabama, before settling into Atlantic Sun play. At 6-8, junior wing man Beau Beech has power conference size. Beech averaged 10.3 PPG last season, and will stretch the Northwestern D, as he shot just under 40% from beyond the arc last year. North Florida, and especially Beech will provide more of a test than Houston Baptist, but this should still be a Northwestern win.

This season will see the Phoenix step up in competition from the SoCon to the more challenging CAA. Replicating their success from last year however, will be a challenge as Elon loses 4 of its 5 top scorers. Junior Tanner Samson will be asked to play a bigger role this year, after averaging 9.4 PPG last season. If this game were played last year, it could certainly be a trap for Northwestern, but Elon doesn’t have the firepower to test the ‘Cats this season. Chalk up another likely W for Northwestern.

While other power conference teams are travelling to Maui, Orlando or the Bahamas, Northwestern will be heading south to Cancun for the Cancun Challenge. The ‘Cats will open the bracketed part of the competition (the games against North Florida and Elon are technically part of the Challenge for scheduling purposes, but will be played in Evanston) against Miami. Miami loses both of its top scorers from last season, and the Redhawks were one of the worst three-point shooting teams in the NCAA, shooting just 29%. The exception to the poor shooting is senior Will Sullivan, who shot 41% on three-pointers last season. If the ‘Cats can keep Sullivan from open looks, they will be able to pack the lane, and limit Miami’s scoring opportunities.

Northwestern’s performance against Miami will determine whether the ‘Cats can advance to the championship, or be forced to settle for a possible third place finish in Cancun. The other side of the bracket features ACC cellar-dweller Virginia Tech squaring off against Northern Iowa.

After starting the year 8-5, Virginia Tech proceeded to lose 17 of its final 18 contests. However, in one of the more shocking coaching changes in recent memory, former Marquette coach Buzz Williams left the Golden Eagles for a bigger paycheck with the Hokies. While this Virginia Tech team is still devoid of talent, for the first time since the firing of Seth Greenberg, there’s hope for the Hokies. Williams will lean on point guard Devin Wilson and a decent freshman class to look to improve upon last season’s horrific ACC campaign.

While Virginia Tech may be more of the “name” opponent, Northern Iowa is most certainly the better team this season. The Panthers return all of their top scorers from last season, a group led by senior forward Seth Tuttle. The Panthers inside-out style would be a potential problem for the ‘Cats, especially with the floor-stretching ability of 6-9 forward Nate Buss. UNI is an experienced team that was picked to finish behind only Wichita State in the Missouri Valley preseason poll. A potential game against the Panthers could be a good RPI boost for Northwestern, and a win might come in handy come March, even if it’s just for NIT purposes.

Regardless of opponent, if Northwestern were to beat Miami, the ‘Cats would have a shot at a championship, something the team hasn’t accomplished since they defeated Illinois State to win the South Padre Island Invitational two seasons ago. While Northern Iowa would present a challenge, the ‘Cats could leave Cancun with a championship.

Northwestern makes its annual appearance in the ACC/Big Ten Challenge with a contest against the Yellow Jackets. The ‘Cats played GT in the 2011 and 2012 edition of the challenge, winning both contests. GT’s best returning player is Marcus Georges-Hunt, a 6-5 forward. Maryland transfer Charles Mitchell is a load in the low post, meaning it could be difficult for Alex Olah to score in this contest. GT should provide a good challenge for NU, but the fact that this game is in Evanston should give the slight edge to Northwestern.

Northwestern’s second, and final, true road game of the non-conference slate takes them to Indianapolis to face Butler. No longer a member of the lowly Horizon league, the transition for Butler to a power conference hasn’t been seamless. Add to that the fact that coach Brandon Miller is on a medical leave of absence, and this is a Butler team in turmoil. However, that doesn’t change the fact that Kellen Dunham can score. The junior averaged 16.4 PPG last season, and will look to build on that following the departure of Khyle Marshall. Perhaps the most interesting part of this game is that it will be televised nationally by FOX, giving the ‘Cats some unprecedented national exposure. Other than a matchup against Northern Iowa in the Cancun Challenge, Butler is probably the most difficult test on the non-conference schedule for the ‘Cats. If they can win here, after winning in Cancun, this team could start Big Ten play undefeated.

Northwestern gets its annual dose of SWAC-tion with a visit from Mississippi Valley State. With the SWAC long seen as the worst conference in college basketball, this game will do nothing to help NU’s RPI come tournament time, but coming off of finals week, this game should be an easy win. The Delta Devils will be led by seniors DeAngelo Priar and Jeffery Simmons. The tallest player for MVSU is 6-8, meaning that this should be a game for Alex Olah to feast down low. Other than the season-opener against Houston Baptist, this is the easiest game on the ‘Cats schedule. It may be an ugly win coming off of a break for finals, but this will be a win nonetheless for NU.

Under former Providence and Iowa coach Keno Davis, the Chippewas struggled to only 3 conference wins last season. Central Michigan is led by junior guard Chris Fowler, who last season averaged 17.4 PPG. This season’s prospects don’t look much better for the Chippewas, as they were picked to finish 5th in the MAC West division in the preseason poll (CMU was, however picked by one member of the media to win the conference championship, so perhaps there’s someone out there who thinks they could be good this year?). Overall, this contest should be an easy win for Northwestern against a weaker MAC foe.

Western Michigan is the only team on Northwestern’s non-conference schedule that made an appearance in the NCAA Tournament last season. The Broncos fell 77-53 to Syracuse in their opening game. Guard David Brown, now a fifth-year senior, returns after leading the Broncos with 19.1 PPG last season. Last season, NU defeated Western Michigan 51-35, holding Brown to 10 points on 15 shots. The 10 points for Brown against the ‘Cats was his lowest against Division I competition other than the 9 he scored against Syracuse in the NCAA Tournament. Though Western Michigan will pose more of a threat than Central Michigan, if NU can replicate the defense played last season against the Broncos, they should again be victorious.

Perhaps the best performance of Northwestern’s season last year came on the road against UIC. The ‘Cats scored a season-high 93 points against what was an abysmal UIC team. Things might not be much better this season, as UIC was picked last in the Horizon League preseason poll (although in an oddity the team that has been picked last in the Horizon League preseason has actually played for the conference championship the last two seasons). The Flames will be led by 6-4 senior Marc Brown, who averaged 11.3 PPG last season. Northwestern should have no problem defeating UIC once again.

Northwestern will close the non-conference portion of their schedule against an undersized Northern Kentucky squad. The tallest player for the Norse is only 6-7, which should mean another big game for Alex Olah. Jordan Jackson led NKU with 13.5 PPG last year, and will look to build on that total this season. The game against the Norse should serve as a good final tuneup for the ‘Cats before they begin Big Ten play in Piscataway against Rutgers on December 30th.