Posted on November 20, 2014 by WNUR Sports Leave a comment

WNUR’s Josh Burton (@Josh_Burton1) looks back at Northwestern’s first road win of the season, a 69-56 beat-down of Brown.

After a less-than-convincing season-opening win on Friday night at home against Houston Baptist, the Northwestern Wildcats dominated—for almost 40 minutes—the Brown Bears on Monday night at Pizzitola Sports Center in Providence, Rhode Island, winning by a final score of 69-56.

On Friday, the Cats let the Huskies of Houston Baptist stick around for most of the contest before finally putting them away at the end. However, Tuesday night was a much different story.

Northwestern scored the game’s first five points—in front of a less-than-stellar crowd at Brown—en route to taking a 19-9 advantage by the second TV timeout of the first half. The Bears were able to cut that deficit to five points once but a much more talented Wildcats team held roughly a 10-point lead throughout the first half.

NU had a 36-26 halftime lead after a Tre Demps layup with just four seconds left until intermission. The Cats didn’t let up after the break, scoring 12 of the first 16 points of the second stanza to take a 48-30 lead that they would never relinquish.

Northwestern led by as many as 21 in the second half, easily dispatching one of the weaker teams in the Ivy League. The Cats have dominated Brown in recent memory, winning each of the last three years including Tuesday. The last two victories came in Evanston, including last year’s 58-52 victory.

Obviously, there were a lot of positives from this game for NU, as noted by the margin of victory, which may even understate how good the Cats were. With a slash line of 44/57/81 (FG%/3FG%/FT%), it’s clear that NU shot the ball really well, led by senior guard JerShon Cobb (16 points on 4-for-7 field goal shooting and 3-for-4 three-point shooting) and freshman Scottie Lindsey (10 points in just 13 minutes). 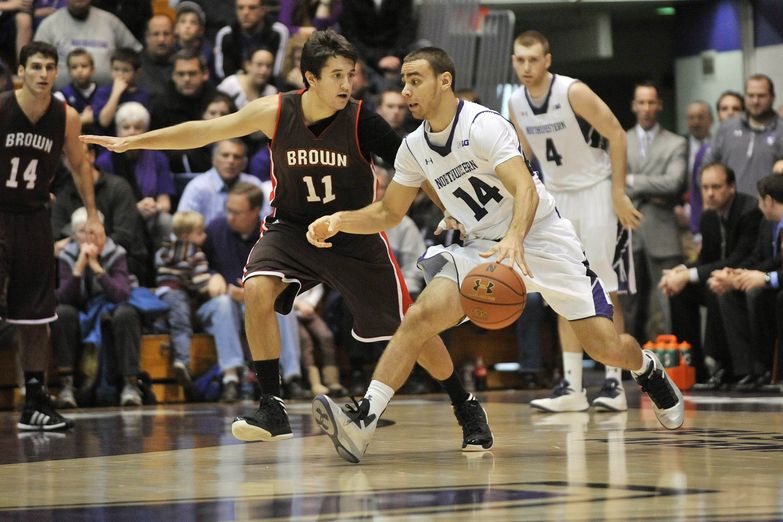 Alex Olah (four points on four shot attempts with four rebounds) was a non-factor, due to both ineffectiveness and foul trouble that saw him foul out at the 4:22 mark of the second half. Freshman Bryant McIntosh (2-for-10 shooting) and junior Tre Demps (4-for-13) were off for basically the entire night.

Perhaps the Wildcat who played the best was sophomore Sanjay Lumpkin, who posted a 15-point, 12-rebound double-double on just six shot attempts. Lumpkin did it all tonight and had his way on both ends of the floor.

The Cats improved to 2-0 on the season and continue their non-conference schedule with a home game against the North Florida Ospreys (1-1) at 7:00 p.m. at Welsh-Ryan Arena on Thursday night. It should be a winnable game for NU as they look to start a season 3-0 for the first time since the 2012-13 season, when the Cats won their first six games.