Posted on November 21, 2014 by WNUR Sports Leave a comment

WNUR’s Zach Pereles (@zach_pereles), Ian McCafferty (@Itmccaf52) and Sam Rudnick (@luhtammer) look back at the week that was in Northwestern Men’s Basketball. This is the first installment of a yearlong week-by-week recap of the action on the hardwood.

The Northwestern men’s basketball team has concluded its first week of play, and the Wildcats sit at 3-0 despite two close calls. 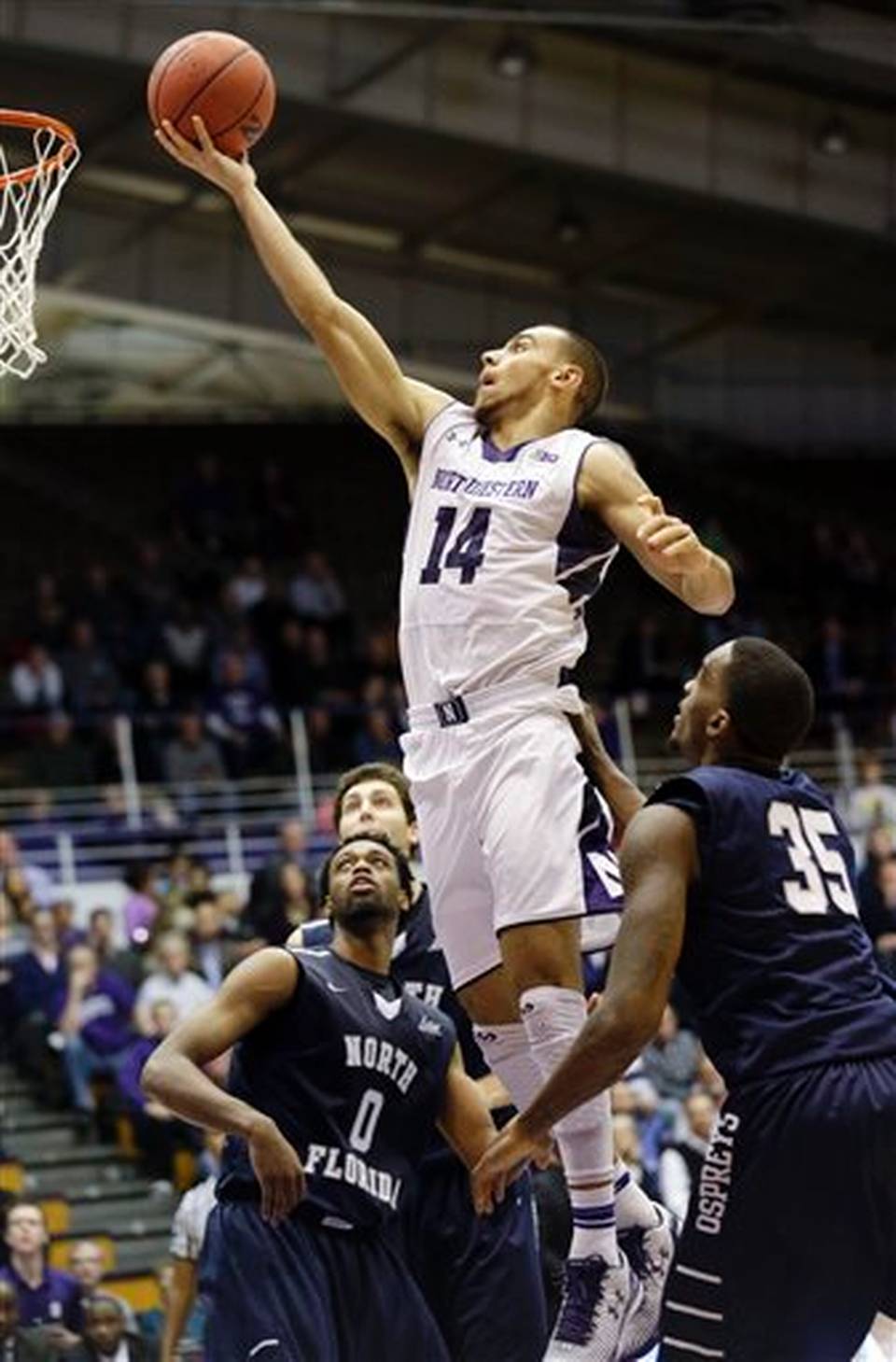 After a rough first couple games, Tre Demps came through late Thursday as the ‘Cats rallied past North Florida. Was it enough to earn him player of the game honors from our staff? Photo credit: Nam Y. Huh, AP.

The season started with a 65-58 comeback win over Houston Baptist at Welsh-Ryan Arena. The Cats struggled mightily in the first half, but pulled out the win thanks to a big second half from Alex Olah, who recorded 21 points and 10 rebounds on the night. Bryant McIntosh had an impressive debut for the hosts, committing no turnovers while adding 12 points and 6 assists.

Northwestern looked slow and sloppy out of the gates, only scoring 28 points in the first half. Olah was dominated by Ricmonds Vilde, and the Wildcat guards gave up too much dribble penetration. Against an inferior opponent, however, Northwestern was able to get away with sloppy play, getting outrebounded, and only shooting 35%. Still, it was an important first win for Coach Collins and his young team.

Northwestern performed much better in their first road test of the season. On Monday at Brown, the Wildcats never trailed en route to a 69-56 win over the Bears. Sanjay Lumpkin had a career-high 15 points and added 12 rebounds, picking up his first double-double of the season. JerShon Cobb also added a team-high 16 points on the night. The Wildcats shot much better this game, 44% from the field, and 8 of 14 from three. Cobb hit three from beyond the arc and freshman Scottie Lindsey added two of his own.

Player of the Game: Sanjay Lumpkin

Northwestern’s third and final contest of the week was against the Ospreys of North Florida in the first round of the Cancun Challenge. The visitors shot 51% on the night, led by point guard Dallas Moore’s 18 points on 7 of 11 shooting. Northwestern trailed by seven with 3:55 left, but Cobb hit a three 15 seconds later. McIntosh scored Northwestern’s next eight points, hitting a three from the right wing to tie the game at 65 with 1:47 remaining. The teams traded baskets before Tre Demps hit a step -back jumper with 2.5 seconds left to win the game.

Sanjay Lumpkin helped the Wildcats jump out to a quick start, scoring six of their first eight points. Northwestern had 23 points in less than nine minutes to open the game, but scored only eight the rest of the first half. The Ospreys took control of the game in the second half thanks to some hot three point shooting and lackadaisical defense by the Wildcats. Despite offensive struggles for much of the second half, the Wildcats were able to stay close thanks to solid minutes from a trio of freshmen: Vic Law, Scottie Lindsey, and Gavin Skelly. The Wildcats then found their shooting touch down the stretch, connecting on their last six shots from the field. This was a good step in the right direction for a young team, as they overcame a late deficit and secured their third win to open the season.

Player of the Week: Bryant McIntosh. The freshman had two impressive performances in his first three collegiate games. He kept Northwestern close in the first half against Houston Baptist, and then showed poise with eight clutch points down the stretch against North Florida.