Posted on November 21, 2014 by WNUR Sports Leave a comment 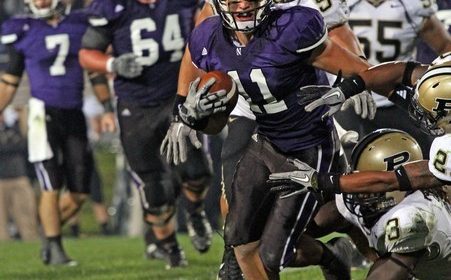 Fresh off a stunning upset in South Bend, Northwestern needs wins in their last two games to become bowl eligible, starting Saturday at Purdue. Does WNUR’s staff think the ‘Cats can stay in the bowl hunt and win in West Lafayette?

Game time is 11 AM on ESPNU, but you can listen on wnursports.com. 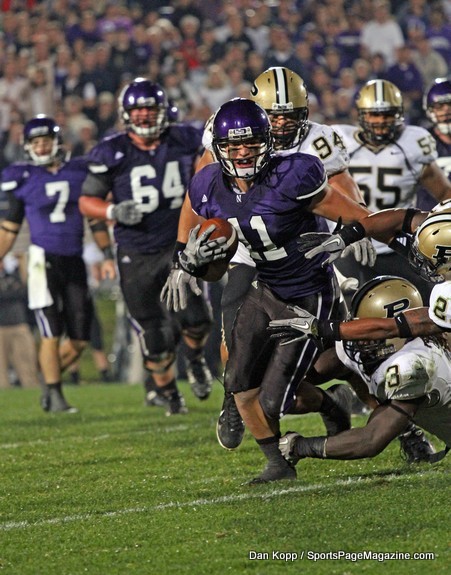 Josh Burton (@josh_burton1) (0-4): Northwestern 20, Purdue 14. Purdue isn’t a very good football team and Northwestern laying an egg against the Boilermakers after the Cats’ stunning upset of Notre Dame would certainly be surprising. NU just has much more talent and should be able to take care of business and help its bowl chances.

Player to watch: Jack Mitchell. NU’s kicker was the star of the game against Notre Dame, hitting four of his five field goals, with three 40 yards or more. He’ll ride that hot streak to a couple of field goals on Saturday.

Ari Ross (@aross50) (3-6): Northwestern 20, Purdue 13
I don’t expect a similar offensive performance to last week, but Northwestern is still a better team than Purdue. Coming off a huge OT win in South Bend, this has all the makings of a trap game, but with a bowl game on the line, I think Northwestern steps up against an inferior team and pulls it out in the end. It’ll be close, too close for comfort, but the ‘Cats will win in the end thanks to a stout defensive performance.
Player to Watch: Justin Jackson, RB, Northwestern. Purdue’s rush defense ranks 11th in the Big Ten. If Jackson can put up another 100+ yard performance, Northwestern’s offense could continue to run on all cylinders.

The Wildcats eke this one out on the road thanks to another big day on the ground from Justin Jackson. Purdue gives up 4.6 yards per carry, 87th in the nation, so the Cats will exploit that, and the defense will do just enough to give Northwestern its fifth win.
Key Player: Kyle Prater. He finally looked like the go-up-and-get-it, talented receiver that Wildcat fans have been looking for, and he clearly established some confidence between himself and Siemian. A repeat performance will really help Northwestern on the road.

The Cats are not going to let last week’s victory go to waste. NU rides the momentum to victory on the road again, despite the return of the straggling offense.

Player to watch: Kyle Prater. The 6-foot-5 senior has separated himself as Siemian’s best target.

Ben Goren (@beng412) (3-5): Northwestern 24, Purdue 17
Purdue does not suck nearly as much now as they did in week 1, and this game has trap game written all over it.  Northwestern’s offense has clicked in the last 5 quarters, but with a heap of injuries in the trenches on both sides of the ball, I can see this game being a close one.
Player to Watch: Dean Lowry With Robbins and Carter banged up and Kuhar shut down for the year, NU’s defensive tackle unit is down to barebones.  Lowry might have to help out inside.  He’s done it before, but being a natural end, there could be some issues in run stopping.

Preston Michelson (@prestonmich) (0-0): Northwestern had the “luck of the Irish” last weekend as they defeated Notre Dame 43-40 in overtime. Expect the “Boilermaker Magic” to continue this weekend for the ‘Cats as they will defeat Purdue by a score of 41-17. But one big question remains: will there be Chick-fil-A postgame?

Austin Miller (@austin_james906) (0-1): Purdue: 19 Northwestern: 9
Just when you think this Northwestern team is going to put it all together, win the final two games and make it to a bowl game (Hawaii anybody?) they come out and lay an absolute egg against the Boilers. Justin Jackson will be the lone bright spot, breaking 100 yards rushing, but the ‘Cats will struggle. After hero status last weekend, Jack Mitchell will miss a field goal, and an extra point, and NU will be frustrated by Purdue.
Player to Watch: Jack Mitchell K, Northwestern: Mitchell played the best game of his college career last weekend against Notre Dame. The kicker has to prove that the game against the Irish is the new normal, and avoid a return to the inconsistent performance that plagued him to start the year.

Purdue isn’t a good football team and they aren’t playing for anything except pride. Northwestern, coming off last week’s high, could come out slow, but should have enough talent to beat the Boilermakers and keep the possibility of a bowl appearance alive for another week.

Player to watch: Nick VanHoose. Purdue lost its leading receiver for the season to a knee injury. The passing game was a big reason why Purdue was able to score 31 against Michigan State last month. If VanHoose and Northwestern’s secondary takes away the pass, I like the Wildcats’ chances.

Player to watch: Treyvon Green. Green made a couple big runs on third-and-long against Notre Dame. Look for him to gash Purdue’s defense in key situations Saturday.