Northwestern went into West Lafayette on Saturday and walked out with a relatively easy victory. Offensively and defensively, Northwestern pretty much dominated a far inferior team, even after Trevor Siemian went down with a torn ACL. Northwestern didn’t have a hangover coming off an emotional upset win over the Notre Dame Fighting Irish, rather they took it to the Purdue Boilermakers, going up 24-7 at the half and eventually winning 38-14. So let’s take a look at the numbers behind Northwestern’s win over Purdue.

For the second straight week, Northwestern put up more than 400 yards of offense. Against the Boilermakers, the ‘Cats had 414 yards of offense, 233 yards on the ground and 181 through the air. Before Siemian went down with an ACL injury, he threw the ball 12 times,completing seven for 93 yards and a touchdown. Zack Oliver, Siemian’s replacement, was 5 of 11 for 85 yards. Matt Alviti completed just one pass for three yards.

And for the second straight week, Northwestern was able to gain yards in large chunks; they had five plays for more than 25 yards and averaged 5.2 yards per play.

Once an unheralded freshman, Justin Jackson has become a star. On Saturday, Jackson rushed for 147 yards and two touchdowns, averaging 6.4 yards per carry, with a long of 68 yards. Jackson eclipsed 1000 yards Saturday; he has now rushed for 1057 yards and eight touchdowns this season, averaging 4.8 yards per carry. He’s been Northwestern best offensive, if not best overall, player this year and has firmly placed himself in the discussion for Big Ten Freshman of the Year, along with Ohio State quarterback J.T. Barrett.

Treyvon Green also had a good game, rushing for 66 yards on 7 carries, a 9.4-yard average, with a long of 44 yards. Against Purdue, Northwestern was really able to establish the run, which opened up the entire offense for the ‘Cats. 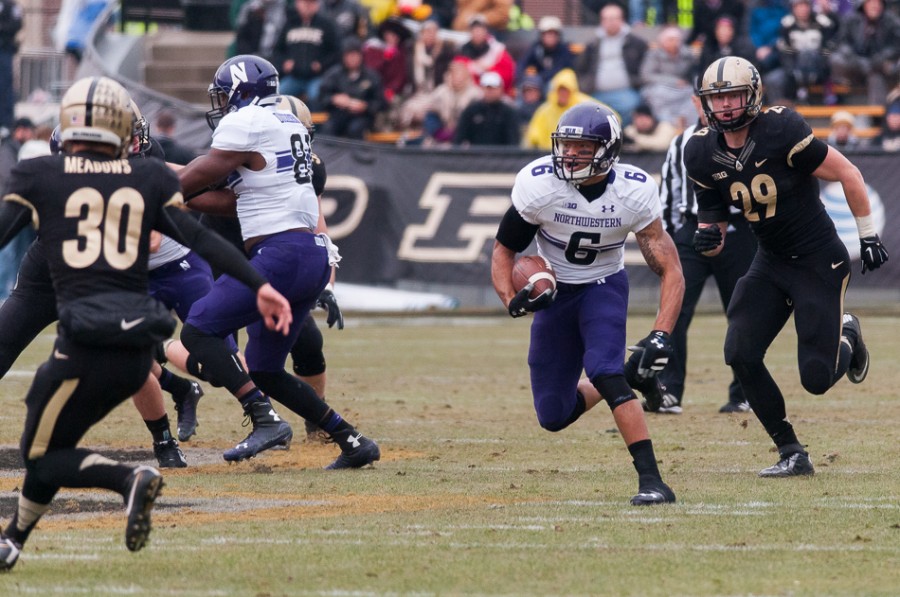 After struggling with drops and muffs the past couple of weeks, Tony Jones dropped Purdue defenders with a spin move and returned a punt for a touchdown Saturday. Photo credit: Nathan Richards, the Daily Northwestern.

The Wildcats returned a punt for a touchdown Saturday for the first time since Venrick Mark took one 75 yards to the house against Penn State on October 6, 2012. Tony Jones redeemed himself from last week’s struggles and spun his way for a 64-yard punt return to put the ‘Cats up 21-0. Jones’ return effectively put the game out of reach for the Boilermakers.

After special teams miscues had plagued Northwestern much of this year, for the past two weeks, the unit has played relatively well. Jack Mitchell hit one of two field goals and averaged 49.4 yards per kickoff, including three touchbacks. Chris Gradone averaged 40.5 yards per punt with a net of 35.5 yards and a long of 52 yards. While not spectacular, the special teams unit had a relatively decent day, especially compared to some previous games.

For the second straight week, the Northwestern defense was incredibly opportunistic, forcing five turnovers (three fumbles and two interceptions). Anthony Walker, Ibraheim Campbell and Jimmy Hall all forced fumbles, which were recovered by Campbell, Hall and Deonte Gibson. Hall and Campbell each also added an interception for good measure. For the game, the ‘Cats were +3 in the turnover margin.

All game Northwestern defenders swarmed to the ball, forcing the five turnovers and limiting Purdue to 312 yards of offense. The ‘Cats forced five three and outs and allowed just 14 points on the game, 7 of which came when the outcome of the game was no longer in question. The ‘Cats’ defense put together another outstanding performance Saturday, part of a stellar season for Mike Hankwitz’s unit.

At 5-6, Northwestern needs one more win to guarantee a bowl game appearance this year. The Illinois Fighting Illini come to town this weekend with a bowl appearance on the line, as well as the Land of Lincoln Trophy, as both teams stand at 5-6. Without Trevor Siemian, Northwestern’s offense will not play the same as they did versus Notre Dame and Purdue, but against a bad Illinois team, a decent performance should do the job. If Northwestern’s defense can play another stout game and Zack Oliver and the offense can play well enough, the ‘Cats could be going bowling.