Posted on December 1, 2014 by WNUR Sports Leave a comment

WNUR’s Ian McCafferty (@Itmccaf52) looks back at the week that was in Northwestern Men’s Basketball.

As week two of the season comes to an end, Northwestern sits at 5-1, winning games against Elon and University of Miami (Ohio), but losing to University of Northern Iowa in the Cancun Challenge championship game. 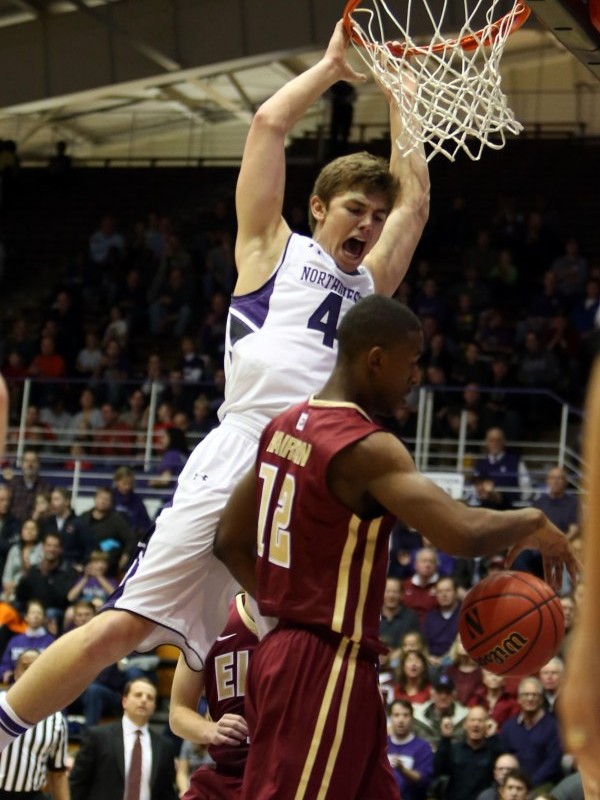 Gavin Skelly saw some minutes last week for the Wildcats, who beat Elon and Miami (Ohio) before losing to Northern Iowa.

Northwestern started the week with a 68-67 win in overtime against Elon at Welsh-Ryan. After playing poorly for much of the game, Northwestern was down by eight with four minutes to go. But the Wildcats rallied, scored the next eight points, and tied the game on a Bryant McIntosh layup with one minute to go. In overtime, Tre Demps led the way with three points and one assist, hitting the game winning shot with a little under a minute left. Vic Law also contributed two points and crucial defense on the final play of the game. Demps finished with 21 points, 4 assists and 3 rebounds, while Law had 16 points, with 2 assists and 4 rebounds.

This game continued Northwestern’s trend of starting slowly but playing well at the end to pull out a win. The Wildcats looked lackadaisical on defense at some points, and Elon’s Tanner Samson shooting 8-13 from three certainly did not help. In comparison, Northwestern as a team shot 3-14 from three. These are the type of games that Northwestern has to win if they want to be successful this season. The Wildcats just have to work on winning them a little more comfortably.

Player of the Game: Tre Demps

The Wildcats improved their record to 5-0 on the season with a comfortable, but ugly 55-46 win over the University of Miami in the Cancun Challenge semifinals. Northwestern again started slowly, going down 18-11 with 12 minutes left in the first half, but fought back and led by 6 at half. The second half was a showcase of ugly basketball. With 16 minutes remaining in the half, Alex Olah hit two free throws to put Northwestern up 40-31. Over the next 10 minutes, the Wildcats scored exactly zero points. Miami was certainly not fantastic either, as Northwestern did all they could to hand them the game, but Miami only scored 9 points, tying the game at 40 a piece with 6 minutes remaining. Northwestern saved the game by going on a 9-0 run capped off by a Vic Law three pointer. Law contributed 13 points, 8 rebounds, 1 assist and 2 blocks. Olah also had a solid game with 13 points, 8 rebounds and 4 blocks.

Northwestern once again played down to their competition and were lucky to pull out a win. This game might say more about the state of Miami’s basketball team then it does about Northwestern, but at this point for Chris Collins and the Wildcats, a win is a win.

Player of the Game: Vic Law

In the Cancun Challenge championship game, Northwestern suffered their first loss of the season, a 61-42 blowout at the hands of the University of Northern Iowa Panthers. Unlike most of the other games this season, the Wildcats started the game well, leading 18-14 with 10 minutes left in the first half. Northwestern would only score two more points the rest of the half, as UNI finished on a 17-2 run. The second half was more of the same as UNI consistently kept their lead at double digits, even leading by 22 towards the end of the game. The leading scorer for UNI was Seth Tuttle, who had 19 points on 7-11 shooting. Northwestern’s Bryant McIntosh had 13 points on 5-11 shooting.

This game was very similar to many of Northwestern’s wins this season, only that the late run to win the game never came. One thing became very apparent about the state of the team after this game. They rely too much on the three point shot. Through the first six games of the season, NU is shooting 35% from three, which is good for 133rd in the country. While 35% isn’t horrendous, it also is not justification for taking an average of 19 threes per game. This reliance on three pointers is what leads to the lack of consistency for the offense. When the team is hitting threes they play well, when they go cold, the team goes long stretches without scoring. Currently the Wildcats just do not have a go to scorer to help them get through tough stretches. It will be interesting to see how Coach Collins handles this as the season progresses.

Player of the Week: Vic Law. For the second week in a row the player of week goes to a freshman, as McIntosh received it last week. While Tre Demps had the best individual game this week against Elon, Law was the best all-around player. He scored a total of 31 points, had 19 rebounds and 6 blocks in the three games.