A disappointing end to a disappointing season. Northwestern needed a win to gain bowl eligibility Saturday, but against in-state rival Illinois, the ‘Cats got thrashed 47-33. After an up and down season, with wins over ranked Notre Dame and Wisconsin, but losses to Northern Illinois and Michigan, Northwestern ended their season on a low note, losing the Land of Lincoln trophy to the Fighting Illini. Decimated by injuries on both sides of the ball, the ‘Cats were outplayed by a bad Illini team on Senior Day at Ryan Field. So let’s take a look at the numbers behind Northwestern’s 47-33 loss to the Fighting Illini.

Before Saturday’s game, the Fighting Illini ranked No. 119 in the Football Bowl Subdivision in rushing with a little over 100 yards per game. But against the ‘Cats, Illinois more than doubled that with 291 yards of rushing. Reilly O’Toole rushed for 147 yards, Josh Ferguson rushed for 95 yards and two touchdowns and Donovonn Young rushed for 51 yards. The Fighting Illini averaged 6.2 yards per rushing attempt, two yards more than Northwestern.

If Northwestern had any chance to win, their defense needed to play a good game, especially with Trevor Siemian out. But instead, the defense laid an egg giving up 47 points and 438 yards of offense in their worst game since Iowa. Injuries were a factor, but it’s not an excuse to give up 438 yards of offense to the worst offensive team in the Big Ten. 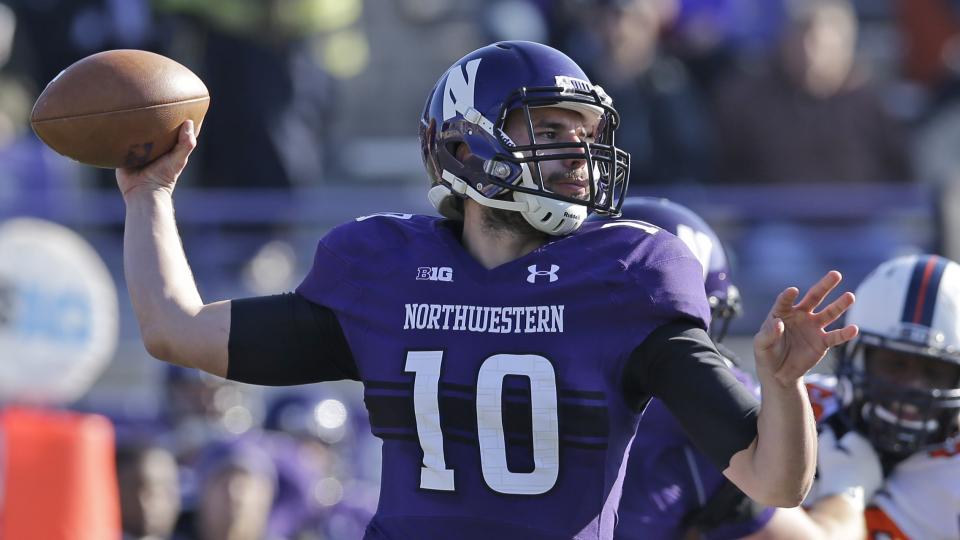 Northwestern turned the ball over five times against Illinois, a recipe for disaster. Zack Oliver threw three interceptions, including a pick six that sealed the game, and fumbled twice. Five turnovers absolutely doomed Northwestern’s offense from the start. Northwestern couldn’t get anything going in the first half, and it amounted to 26-7 deficit at halftime.

In the first half, Northwestern’s drives ended in punts four times, turnovers four times and one touchdown as Solomon Vault took a kickoff to the house. The ‘Cats’ offense played horribly in the first half and was quickly doomed as they were unable to keep up with Illinois.

Northwestern blocked a field goal, as Illinois hit just two of three field goals and five of six extra points. Jack Mitchell, on the other hand, hit his only field goal attempted and both extra points.

Chris Gradone averaged 36.6 yards per punt, with a net of 35.2, including one inside the 20. On kick returns Northwestern averaged 47.5 yards on two returns, one of which was Vault’s return for a touchdown, and the Wildcats returned one punt for a loss of two yards. Overall, Northwestern’s special teams played well, but with poor offensive and defensive play it just wasn’t enough.

The lone bright spot of the day was – you guessed it – freshman running back sensation Justin Jackson. In the final game of the season, Jackson rushed for 130 yards on 24 carries, including two touchdowns and a long of 35 yards, averaging 5.4 yards per carry. Jackson also had three catches for 46 yards. For the season, Jackson carried the ball 245 times for 1,187 yards and 10 touchdowns, averaging 4.8 yards per carry. He also totaled 201 receiving yards and one touchdown on 22 passes.

Simply, Justin Jackson is a star. He went over 100 yards rushing again against Illinois on Saturday and has been Northwestern’s best offensive player for most of the year. The freshman running back should be in discussion for Big Ten Freshman of the Year and will be an offensive weapon for the ‘Cats for years to come. If there’s one reason to look forward to next season, it’s Justin Jackson.

Without a bowl game, Northwestern finishes the season at 5-7. Justin Jackson’s performance, and upset wins over Wisconsin, Penn State and Notre Dame were this season’s highlights, but with some up and coming talent (Jackson, Solomon Vault, Clayton Thorson, Godwin Igwebuike and more), next season is something to look forward to.