Posted on December 5, 2014 by WNUR Sports Leave a comment 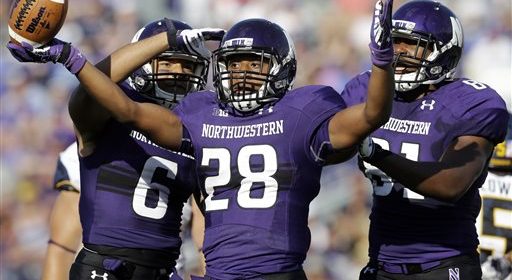 It’s awards season, and the WNUR Sports staff is getting in on the act. 19 staffers voted for Northwestern’s offensive, defensive, and breakout players of the year, as well as Big Ten player and coach of the year. Results are below, along with comments from voters defending their selections. 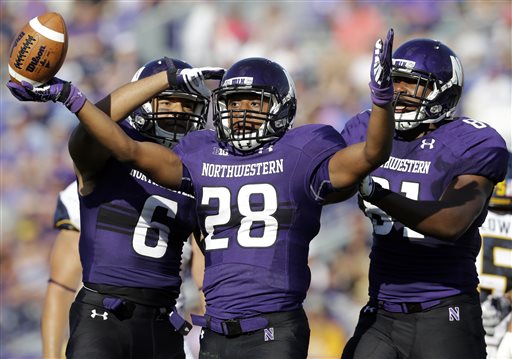 “I hope the Justin Jackson selections don’t require explanation. If he doesn’t unanimously win offensive MVP, I have lost all faith in humanity.”- Jason Dorow

“Justin Jackson would be an All-Big Ten selection if the league wasn’t so deep at running back. He wins every award he’s an option for.”- Ben Goren

“Without Trevor Siemian, we wouldn’t have won many of those games – he is so undervalued and has done so much for this school.”- Nick Scoliard

“I was torn between Ibraheim and Chi Chi not because I think Chi Chi is better, but because Ibraheim missed a bunch of games due to injury. However, I pulled the trigger on Ibraheim because he is far and away the team’s best defensive player.”- Jeff Eisenband

“Matthew Harris had an amazing year at cornerback this year and had a lot of interceptions. Whenever he had interceptions in a game, those were usually sparkplugs for the Northwestern offense to score.”- Travis Cottle

“Really tough call here but I think Lowry was the most consistent defender for the ‘Cats this year. With all the injuries on the D-line this season, his versatility came in handy.”- Eric Klaus

“Ibraheim just seemed to be everywhere – he would stuff a screen in the back, bracket receivers well, and lay a hard tackle when someone’s running in the open field.”- Nick Scoliard

“Ibraheim Campbell was a game-changer in the NU secondary. His strip of Cam McDaniel at Notre Dame gave NU a chance.”- Zach Pereles

“In the four games Ibraheim Campbell missed, the Cats went 1-3 and gave up 38+ points twice. NU was 4-4 when he was on the field and he always had a nose for the ball and a tackle.”- Josh Burton

“Ariguzo is the Defensive MVP because he was a consistent force up the middle of the defense and had double digit tackles in 6 different games this season.”- Ian McCafferty

“I think even Northwestern’s coaching staff was surprised by what they had in Jackson. Maybe that explains why he wasn’t the starter at the beginning of the season.”- Cameron Songer

“While Jackson had the most surprising breakout performance, Anthony Walker made a great first impression few will forget.”- Jacob Murphey

“Without Melvin Gordon, Wisconsin would have had no chance in the Big Ten. Now they’re playing for the Big Ten Championship. He’s a strong Heisman contender, and unlike J.T. Barrett, will be playing when Wisconsin and Ohio State meet this weekend.”- Zach Pereles

“Gordon has rushed for nearly 2300 yards even though Wisconsin has had next to no passing game for most of the season.”- Eric Klaus

“Big Ten Player of the year was JT Barrett because he was the quarterback of the best team in the Big Ten and he set the all time record for touchdowns in the Big Ten.”- Ian McCafferty

“I could jump on the Urban Meyer bandwagon, but I think what Jerry Kill did with average talent was pretty amazing. That Minnesota team is not very good, but he knows how to coach.”- Jeff Eisenband

“Jerry Kill deserves the Big Ten Coach of the Year for how much he has turned around the Minnesota program in the past two years, taking a 3-9 team from 2011 to a team that is 8-4 in back to back seasons.”- Travis Cottle

“Jerry Kill did more with less than any other Big Ten coach. He has turned Minnesota around.”- Cameron Songer

“Meyer, Andersen and Dantonio only met expectations, if that. Jerry Kill exceeded expectations and had Minnesota 30 minutes from a B1G championship game appearance. Credit how he’s developed the Gopher program in just a couple seasons.”- Jason Dorow

“Urban Meyer lost his starting quarterback and still has the team on the doorstep of the College Football Playoff.”- Zach Pereles

“Urban Meyer, the Buckeye coach, went through three different quarterbacks this year, yet only dropped one early game.”- Ari Ross

“Big Ten Coach of the year was Gary Andersen because he managed to coach his team through early season struggles and shaky quarterback play to a Big Ten West Title.”- Ian McCafferty