Posted on December 30, 2014 by WNUR Sports Leave a comment

Due to winter break, it’s been a while since the last NU men’s basketball preview podcast. Those will resume next week, but in the meantime, WNUR’s Michael Stern (@michaeljstern23) previews the Wildcats’ first two Big Ten games in text form.

Since the last podcast: Michael and Justin correctly predicted Northwestern losses against both Georgia Tech and Butler in early December. The Wildcats fell by eight at home to the Yellow Jackets before losing by nine on the road to Butler. Northwestern concluded non-conference play with a 4-1 record on a five-game homestand against mid-major opponents. WNUR’s Ian McCafferty looked back at the first four games of the homestand (a double-digit loss to Central Michigan, a hard-fought win over Western Michigan, and two blowout victories) earlier this week.

The Wildcats won their final tune-up for Big Ten play Saturday against Northern Kentucky, spotting the visiting Norse a 5-0 lead before rallying to take a 36-24 halftime lead which never reached single digits in the second half. Tre Demps stayed hot, scoring 23 points on 9-of-18 shooting, Scottie Lindsey shot 4-of-8 and delivered 12 points off the bench, and Bryant McIntosh added 15 points, four assists, and only two turnovers in 34 minutes. Alex Olah had a team-high seven assists, but his two points and zero made field goals caused concern. Sanjay Lumpkin and Vic Law battled foul trouble, while Gavin Skelly grabbed a team-leading seven rebounds and missed a dunk.

Rutgers: According to Ken Pomeroy, the Scarlet Knights are the worst team in the Big Ten (Northwestern ranks 13th in the 14-team league). Rutgers alum and longtime Wizards head coach Eddie Jordan is in his second season at the helm in Piscataway. The team went 8-5 in an up-and-down non-conference slate ahead of its inaugural Big Ten basketball season. Close wins over Vanderbilt and Clemson highlighted non-conference play, while home losses to Saint Peter’s and Saint Francis (PA) (not to be confused with Saint Francis (NY), whom the Knights beat by three) were low points.

Senior Myles Mack is the team’s leading scorer at 13.7 points per game, and he hit a buzzer-beater to lift the Knights over Monmouth in Rutgers’ final non-conference game. Six-foot-nine senior Kadeem Jack also averages just north of 13 points a game, along with 7.2 rebounds, and could be a challenge for Alex Olah. Third option Junior Etou (9.9 points, 6.7 rebounds per game) comes from the Republic of Congo, and he combines with freshmen from Senegal and Netherlands to give the team an international flavor.

This is a road game for the Wildcats, and the going might get tough, but Northwestern should be able to find a way to win against a team rated similarly to Western Michigan. 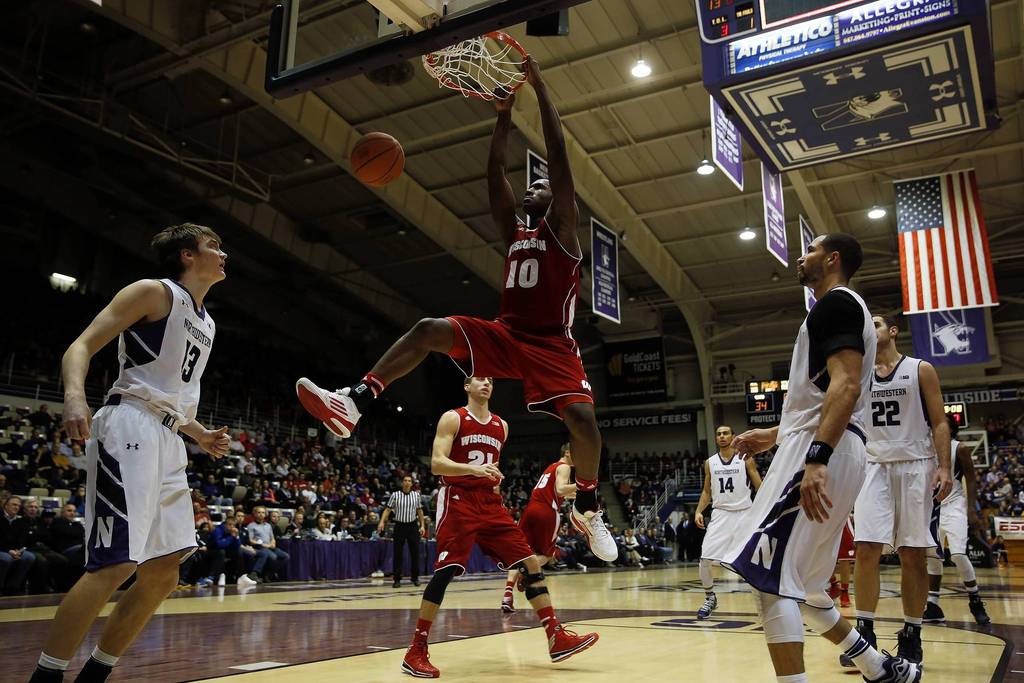 Nigel Hayes outscored Northwestern’s team in the first half the last time Wisconsin visited Welsh-Ryan. What will he and the Badgers do for an encore? Photo credit: Scott Strazzante, Chicago Tribune.

Wisconsin: The Badgers are the class of the Big Ten, reached the Final Four last season, and are Ken Pomeroy’s 4th-ranked team in the country. Last year, Wisconsin throttled Northwestern in Evanston in the Wildcats’ first game after New Years, but the Wildcats upset the Badgers in Madison in late January to earn a split against the conference’s best team.

This year’s Badgers coasted through non-conference play at 12-1, recording wins against quality opponents Georgetown, Oklahoma, Marquette, and Cal. Wisconsin’s only loss came at home against Duke in the Big Ten/ACC Challenge. Big man Frank Kaminsky is back, and he’s the team’s leading scorer for the second season in a row. This season, the Illinois native is averaging 15.8 points and 7.7 rebounds a game, and shoots 43% from three-point range. He’s a matchup nightmare, but he’s not even Wisconsin’s leading rebounder. That’s Nigel Hayes, who outscored the entire Northwestern team in the first half of last year’s game in Evanston and averages 12 points and eight boards this season. Sam Dekker averages 12 points per game as well, point guard Traevon Jackson (son of Jim) picks his spots well, and Josh Gasser shoots 46% from deep. This probably won’t end well for the Wildcats.