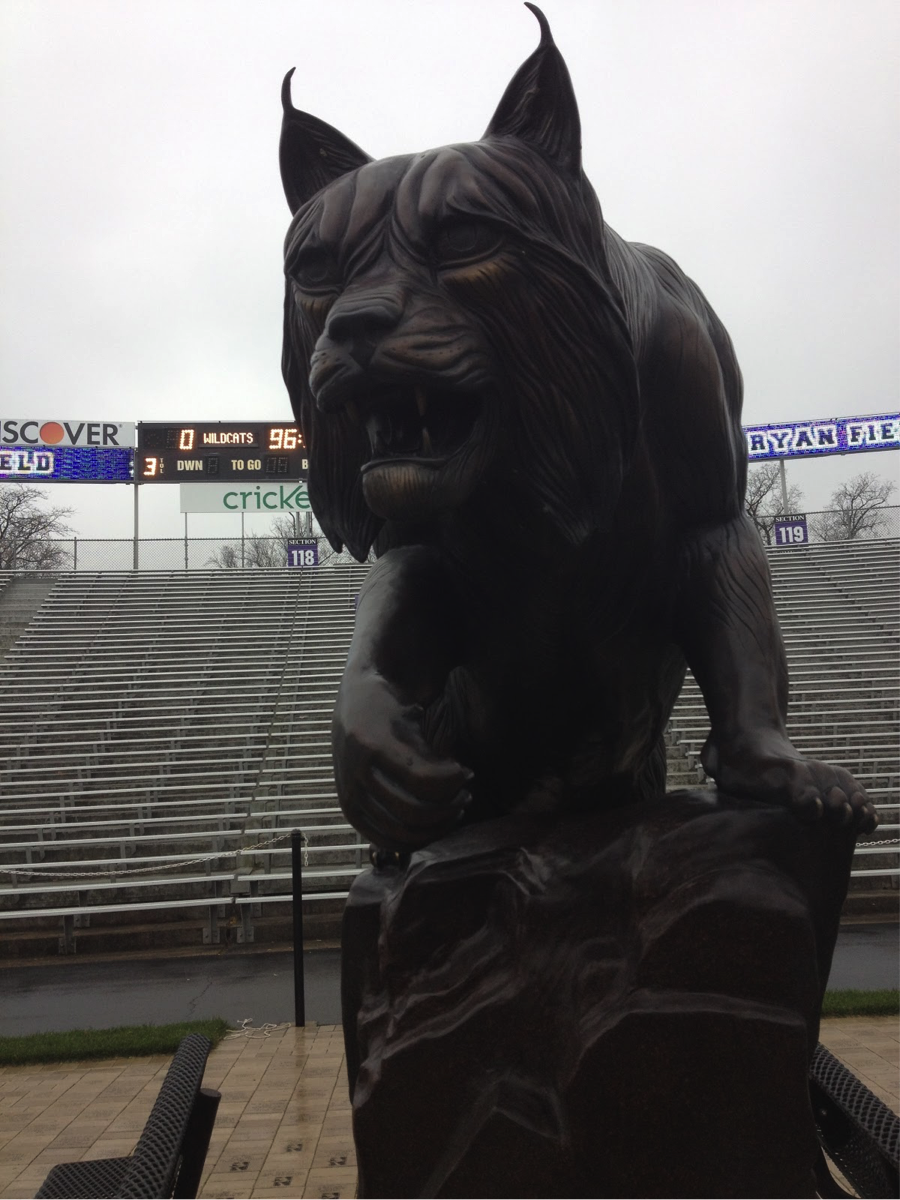 The Wildcat statue at Ryan Field looks mighty fierce, but how does it match up against other Big Ten mascots? WNUR’s Erik Bremer is on the case.

The Big Ten Tournament begins on Wednesday, and everyone has given their predictions based on their perceived knowledge of the conference and teams.  But that’s boring, so let’s try something else.  Who would be the Big Ten champion in a battle of real-life mascots?

I’m not sure what a nittany lion is, but the official Penn State website describes it as “the fiercest beast of them all.”  A cornhusker, on the other hand, is (presumably) one who husks corn. A matchup between these two wouldn’t last very long.

This battle depends a lot on one’s interpretation of “golden.”  If this hypothetical gopher were made out of solid gold, it would be impervious to every other Big Ten team except the Purdue Boilermakers and their smelting equipment. As awesome as that would be, I’m under the impression that the namesake is just an ordinary rodent with the aurum hue of a Minnesota sunset. A knight of any color could easily dispatch a diminutive gopher, whether on horseback or not.

Wolverines are small, but they have a reputation for killing prey much larger than them.  On the other hand, the Illiniwek were a proud and thriving people before they were relocated to Oklahoma.  I might give the wolverine a shot against a peaceful Illiniwek, but a fighting one? No chance.

As someone with corrective lenses, I can attest to the importance of good vision.  But in terms of sheer size, a nittany lion could do much more damage to a hawk than the other way around.  This would probably be the most drawn-out battle, with the hawk only putting itself at risk when it ventured to the ground.  Unless the two predators found a form of détente, I see the nittany lion employing the Homer Simpson method of combat and waiting for the hawk to tire itself out before striking.

Hoosier is the official demonym for an Indiana resident.  So, for the sake of entertainment, let’s assume that the Indiana resident in question is Indiana Head Coach Tom Crean.  How long would Ol’ Tom last in the ring with a ferocious wildcat? Probably around 15 seconds, at which time he would pause to pull up his pants and the ‘cat would pounce.  The only Hoosier that could give a wildcat a run for its money would be Indiana native John Mellencamp.  I’d pay an obscene amount of money to see a wildcat fight a Cougar.

There are several ways to crack a nut. One of the more effective methods is to use a sword, much like the ones that knights carry.

It’s a shame that Michigan didn’t move on, because a battle between two members of the weasel family would be endlessly interesting.  As it is, the Illini move on as the same principles in their first matchup apply.  If Wisconsin’s mascot was a honey badger, we might have something. Honey badgers are notoriously indifferent, taking what they want. But Wisconsin’s mascot looks like the more common American badger, which has its hands full dealing with voles and sand martins.

I have a lot of respect for trained craftsmen, especially in the diminishing field of boiler making.  But a blast furnace doesn’t do you much good when you come face-to-face with the self-proclaimed fiercest beast of them all.  A boilermaker may be able to hold off the lion by causing confusion and delay but the effort may be in vain. Railways are no good. Pull ‘em up, turn them into roads.

Though a terrapin has one of the best defense systems in the Big Ten, all a wildcat would need to do is find a way to get under the shell and flip it over.  Or find a car and drive over it.  Or procure a leaf and a hatchet, draw the terrapin’s head out of its shell with the leaf, and decapitate it with the hatchet.  The only way a terrapin could win this matchup is if it manages to survive for 13 to 14 years, the average lifespan of a wildcat.  We don’t have that much time.

Our first human-against-human matchup, and it’s a doozy. Knights have swords and horses, while Spartans have swords and abduction marriages.  But before they were the Scarlet Knights, Rutgers athletic teams called themselves the Queensmen and Chanticleers. Spartans show no mercy towards clear-singing servants.

This one’s tough.  Do you go with a fictional beast of the wild, or a member of a very real Native American tribe?  When in doubt, don’t appropriate the culture of others.  I don’t want to have any more uncomfortable analyses in the finals.

Spartans have those long spears with the arrowheads on the end. The internet tells me that they’re called dories, and they’re seven to nine feet long.  Though one charge from the wildcat could prove deadly, a Spartan could dispatch the feline without even coming close to it.

It bears repeating that the nittany lion is the fiercest beast of all.  The thirteenth seed made it to the finals by defeating huskers, hawks, craftsmen, and Native Americans, so it’s safe to say that the nittany lion is pretty ruthless.  On the other hand, the Spartans threw babies into a pit if they weren’t deemed strong enough.  I feel like that’s a trump card.

Congratulations to the Michigan State Spartans on their Big Ten Championship and automatic NCAA Tournament berth.  I don’t think there are any schools with Persian mascots.  They’ll go far.