Women’s basketball a 7 seed in the NCAA Tournament 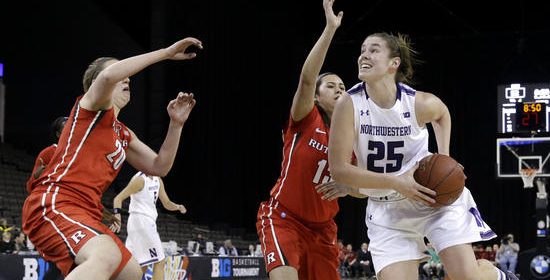 Northwestern’s post-season fate has been resolved. Yes for the first time in nearly 20 years, Northwestern women’s basketball is joining March Madness, snagging a 7 seed in the Oklahoma City regional of the NCAA Tournament, where they will play Arkansas in their first game.  If they win, the Wildcats will battle either Baylor or Northwestern State to enter the Sweet 16.  Northwestern will play at 11 AM central time in Waco for their first round game.

After going 23-8 through the regular season and Big Ten Tournament, Northwestern’s NCAA tournament was near spotless. One loss to lowly Penn State was the only really bad loss the Wildcats had, and NU had a bevvy of pretty good wins, including DePaul, Rutgers (twice), Nebraska, and Minnesota.

Northwestern was led by all-Big Ten 1st team sophomore Nia Coffey, who averaged almost 16 points a game and 8.9 boards. Junior Maggie Lyon too was a key contributor, scoring 14 a night and was 6th in the conference in three point shooting. Point guard Ashley Deary ranked 2nd in the conference in steals and 3rd in assists. Despite being a thin team in terms of numbers, just about every player who sees the floor contributes significantly.

Even if the tournament committee isn’t technically supposed to look at the way teams end the season, it’s hard to ignore the way Northwestern came into the barn. Since February 1st, Northwestern has gone 9-2, and those two losses came against Maryland, who last lost sometime before the Civil War. Northwestern is riding high there’s no doubt about it.

Northwestern is not a team you want to play in the post-season. They can score in a bunch of ways and they play a unique style, with Joe McKeown’s “Blizzard” defense. The trapping 2-3 zone forces an unbelievable amount of turnovers, and Ashley Deary is as imposing a defender as someone who measures in a 5-4 can be. Northwestern has made it’s living off of exposing opponents’ miscues. It’ll be a dogfight. Don’t expect Northwestern to be just “happy to be here.” They may be young, but they’re hyper-talented and ready to make some noise.  As always, WNUR will be there to call the game on 89.3 FM or streaming worldwide at wnursports.com.