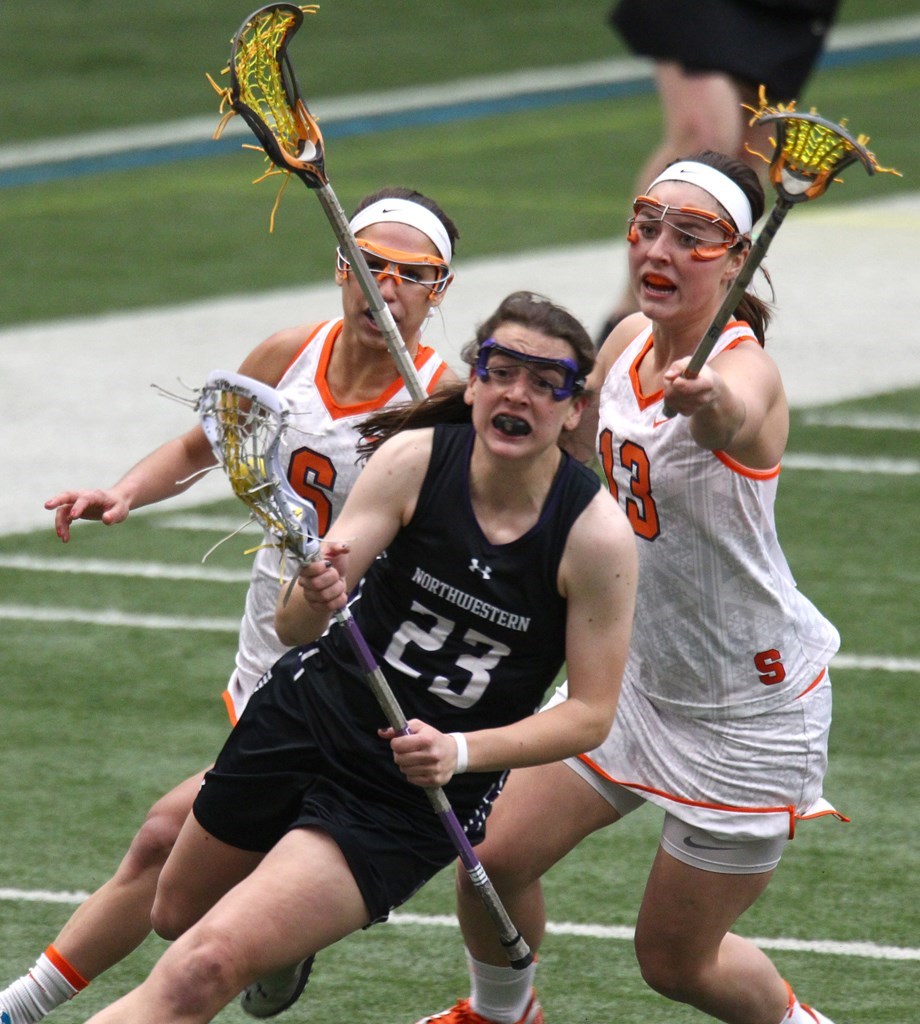 Over the past three years, Syracuse has made two national championship games.

Northwestern has made one.

The landscape of NCAA women’s lacrosse is changing, and Northwestern no longer holds a monopoly on the sport.

The 4-2 Wildcats enter Sunday’s contest vs. the No. 5 Orange ranked seventh. With two of its four wins coming by only one goal (one in overtime after a miracle comeback), Northwestern needs to prove it can still keep up with the big dogs.

The ‘Cats seem to be stuck in another era of lacrosse — they’re a defensive-minded team in an increasingly offense-oriented sport.

Last season, NU had zero players among the top 50 scorers in the NCAA. This season they have one — freshman Selena Lasota, who chalks in at No. 3.

Without Lasota, the ‘Cats would be lost. On the season, they average 10.83 goals per game. She averages four a game. If you haven’t already done the math, that’s 39 percent of the team’s goals a game. After her 24 goals, NU’s next leading scorer is junior Kaleigh Craig at 11.

Still, Lasota only scored two goals a game in NU’s matches against then number 2 North Carolina and then number 6 Virginia. And even though she’s arguably the most dynamic player in all of women’s lacrosse, and probably the most fun to watch, her play is still sloppy. This is her first time playing traditional women’s lacrosse (she played box lacrosse in Canada) and she’s still adjusting to the sport.

Coach Kelly Amonte Hiller talks every week in her interview with WNUR’s Tara Wendell about the Cats’ seven-man threat on offense. Any player can score at any given time, she says. I haven’t seen that offensive depth yet this season, and the numbers reflect that. NU ranks exactly 50th in the country in scoring offense, while Syracuse ranks 16th.

The draw is even worse. Having to replace Alyssa Leonard, the greatest draw control specialist of all time, is obviously no easy task. But so far this season, the ‘Cats have fallen dreadfully short. They average 10.8 draw controls a game this year (that’s outside the top 50) and have only won the draw battle against Marquette and Colorado, their two unranked foes. Syracuse is second in the nation with 16.8 draw controls a game.

This week will tell us a lot about the state of this program. With three games against top 10 teams in short succession (Syracuse, Maryland, and Louisville), we’ll learn if the Wildcats still have a shot at a ninth national title since 2005.

Onto this specific game:

The Orange enter this contest riding a three-game winning streak. Syracuse sits at 8-2 with one-goal wins against Virginia and Florida and losses against No. 1 Maryland and No. 3 Boston College (by one goal). Halle Majorana is one of the nation’s biggest dual-threats with 24 goals and 16 assists on the year, while Kayla Treanor leads the team with 27 total goals (2.70 per game). Kailah Kempney is third in the nation with 9.00 draw controls per game, and leads the nation with 90 draw controls this season. NU leads the all-time series record 11-2.

HOW THE CATS STACK UP

Northwestern is relying an unhealthy amount on the free position shot (which they’re missing too many of by the way, but that’s another problem) and NU needs to score more without a whistle.

The ‘Cats should either score without a free opportunity from eight meters, make the gimmies, or, ideally, both.

The Cats like to do this thing where they just pass the ball around and hang onto it. They wait for their shots and take them at opportune times. In another sport that may be great, but lacrosse is one of the most high-energy sports out there. To some degree this strategy has worked: They allow fewer goals against the top teams than most. To some degree it hasn’t: They score fewer goals than most in an offensive sport.

On the one hand, I know NU doesn’t really have the great scorers that some of the other top teams have (outside of Lasota), and the Wildcats have one of the nation’s best defenses, so in theory this strategy plays to their strengths. But on the other hand, there comes a point where being too tentative becomes too much. I’m worried the Cats have crossed that line. It doesn’t help that they still miss a lot of the shots they do take.

My solution: Just go for it. Be more aggressive.

Bridget Bianco is one of the best goalies in the nation. She has 25 saves the past two games with a .555 save percentage.She’s more than proven over the past three seasons that she’s just as good against the nation’s top teams as against weaker opponents. No disrespect to Kelsey Richardson, but Northwestern has the better goalie in this one.  And for that matter the better defense.

The draw control margin above is not pretty. Look, I’m realistic: the post-Alyssa Leonard Cats won’t out-draw Kailah Kempney. That being said, they must limit the margin of defeat.

Well duh…but one of NU’s biggest strengths the past two seasons has been doing that in a sport increasingly dominated by offense as they’ve held the nation’s top scoring teams to far less than their goals scored average. If they keep that up, they have a shot at winning every game.

With Alyssa Leonard gone, Kara Mupo was supposed to be the senior leader for this squad both on and off the field. While I can’t attest to the latter, I can to the former — she’s underperformed. The attack has only six goals so far this year…and five of them came in the season opener.

She sat out the last game with injury, and I don’t know how much that affected her in the previous four games or if she’ll be back, but this team really needs her.

Well this was a pleasant surprise. In the first two games of her career (she missed the season’s first four games with an injury), freshman Corinne Wessels has had eight goals and seven assists.

Wow. She’s the second threat after Selena Lasota the ‘Cats have been waiting for.

Seriously though, this team needs more scorers. Coach Amonte Hiller may talk the talk about having a seven-threat offense, but now it’s time to start walking the walk.

Or just dump the ball to Lasota every time, what do I care. Whatever it takes to win.

Northwestern follows my advice, reminds the world why it’s made 10-straight Final Four appearances, and turns the Orange blue.