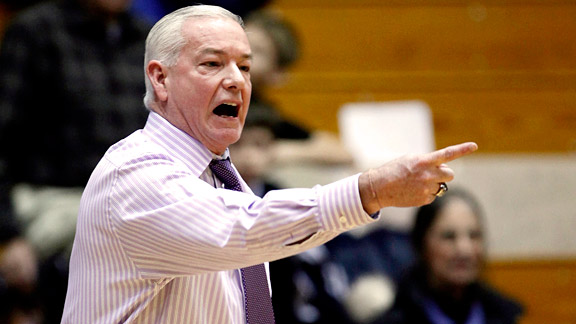 Joe McKeown took Northwestern in the NCAA tournament for the first time since 1997, and recorded his 600th career win. Not a bad season, eh? Photo credit: Charles Cherney, AP.

But Northwestern’s season ended in anguish as the ‘Cats blew a 12-point lead and lost 57-55 to the 10-seeded Arkansas Razorbacks. Alex Cohen and Ashley Deary lead the ‘Cats with 13-points apiece. Nia Coffey had a chance at what would have been her second go-ahead bucket of the season with under 10 seconds left, but she couldn’t convert, and the ‘Cats were knocked out of the first round of the tournament. Rebounding and turnovers plagued the ‘Cats in this game as they had all season. Northwestern was outrebounded 20-6 on the offensive glass and turned the ball over 19 times, resulting in 18 points off turnovers for the Razorbacks.

The ‘Cats got off to a sensational start to their season winning their first 10 non-conference games, the program’s longest winning streak since 1995. During the streak, Northwestern topped No. 18 DePaul for the second year in a row, this time at McGrath-Phillips Arena in double overtime. Coffey and Maggie Lyon both surpassed the 20-point mark as five Wildcats scored in double figures in the win. The ‘Cats also dropped 102 against Chicago State on Nov. 14, and McKeown picked up his 600th win as a coach against Kent State. McKeown is one of just 34 coaches to win 500 or more games in NCAA history and his 620 career wins rank 15th amongst active Division I coaches. 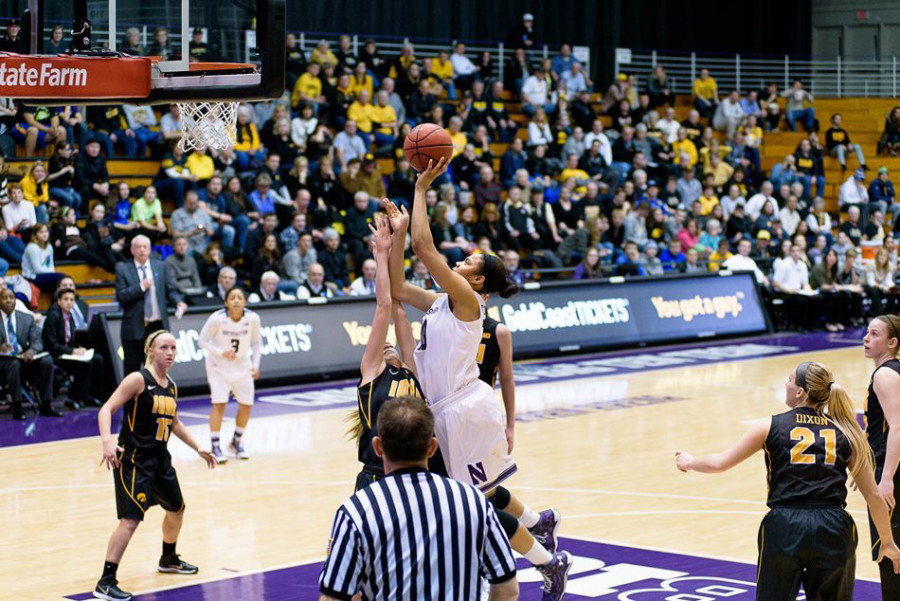 Nia Coffey set a new career-high with 35 points in Thursday’s loss to Iowa, but the Wildcats dropped two January games to the Hawkeyes before rebounding with an 8-0 February. Photo credit: Sean Su, Daily Northwestern

After winning 10 straight, the ‘Cats suffered their lone non-conference loss of the season in the ASU Classic to host Arizona State, 88-75, and headed into Big Ten play at 10-1. The ‘Cats started off Big Ten play strong with wins over No. 22 Michigan State and Wisconsin. The ‘Cats held Michigan State to just 29 percent shooting, pulling out their first Big Ten win and their first win at the Breslin Center since 1993, while Coach McKeown picked up his 100th win as a Wildcat against the Badgers.

In January the ‘Cats lost five of seven, including two to ranked Iowa. The ‘Cats faltered after leading at the half against the Michigan Wolverines at Welsh-Ryan on Jan. 17, but then proceeded to go on the road and beat rival Illinois by one. Against the Fighting Illini, Christen Inman came up clutch, scoring 4 of her 18 points in the final minute to help the ‘Cats pull away in Champaign.

Against Penn State, the ‘Cats couldn’t handle the Nittany Lions’ size, were outscored in the paint 46-24, and lost 76-75. While Maggie Lyon did reach 1,000 career points, Nia Coffey was just 4 of 17 and overall the ‘Cats shot just 34.8 percent for the game. In the ‘Cats’ final January game, Northwestern and Iowa combined to make an NCAA record 32 3-pointers, but the Wildcats fell 102-99. 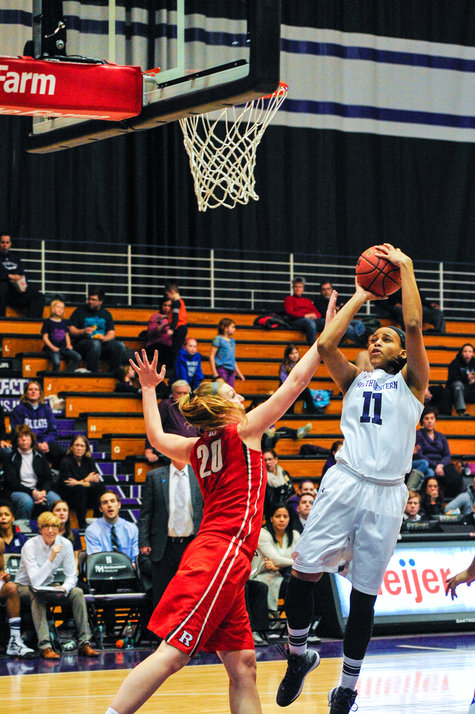 Northwestern hit their stride in February, winning all eight games that month. The ‘Cats’ month included wins over ranked opponents No. 20 Rutgers and No. 21 Nebraska and comeback wins over Purdue, Michigan and Wisconsin.

Injuries to Lauren Douglas and Christan Inman kept two of Northwestern’s key contributors out of a few games (Douglas missed the loss to Penn State, while Inman missed wins over Illinois, Purdue and Michigan), but the ‘Cats still roared through the month of February. And on Feb. 23, after beating Nebraska and Wisconsin the week before, the ‘Cats were ranked No. 25 in the NCAAW AP Poll, their first poll appearance since 1996. By the end of the season, the ‘Cats would be ranked No. 22, their highest ranking since 1990.

Northwestern finished off the season with a senior day loss to No. 5 Maryland, who didn’t lose a single conference game in its first year in the Big Ten. The ‘Cats hung with the Terrapins for most of the first half, but Maryland’s low post combo of Brionna Jones and Malina Howard proved to be too much for the ‘Cats. Maryland outrebounded Northwestern 48-34 and held the ‘Cats to just 29 percent shooting for the game.

In the Big Ten Tournament, Northwestern received a double-bye and the No. 4 seed, and faced off against No. 5 Rutgers for the second time in two weeks. Northwestern started slow and the Scarlet Knights led by 10 at half, but Northwestern battled back behind a double-double from Lyon, shooting 56 percent in the second half and holding Rutgers to just 28 percent from the floor, advancing to the Big Ten semifinals with a 62-57 win.

Northwestern advanced to face Maryland again, and while an 18-point performance by Nia Coffey kept the Wildcats in it in the first half, Maryland again proved to be too much and the Terrapins pulled out a 74-63 victory. Northwestern was again outrebounded by the Terps and turned the ball over 18 times, compared to just eight for Maryland. 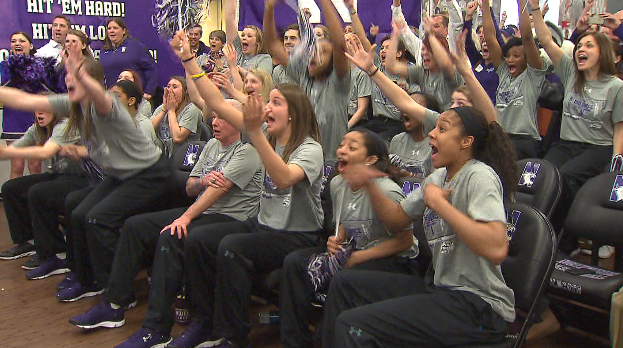 The Wildcats went crazy when they found out their first-round opponent in the NCAA tournament: Arkansas.

For the first time since 1996, the ‘Cats went dancing, securing the No. 7 seed in the Oklahoma City region of the NCAA Women’s Tournament, and losing in the first round against No. 10 Arkansas, 57-55.

Rebounding and Turnovers plagued the ‘Cats all season. For the season the ‘Cats were out-rebounded by 3.5 rebounds per game (5.1 in conference play) and averaged 14.9 turnovers per game. Northwestern will need to improve on the glass next season, which will be an especially tall order with 6’5’’ senior Alex Cohen graduating.

Seniors Alex Cohen and Karly Roser graduate this summer, leaving the ‘Cats with big shoes to fill. Coach McKeown’s latest recruiting class is headlined by two ESPN 3-star prospects, 5’6’’ PG Jordan Hankins and 6’2’’ F Pallas Kunaiyi-Akpanah. These newcomers and others on the ‘Cats’ current roster (Maya Jonas, Alexis Glasgow and Allie Tuttle) will have to step up to fill Cohen and Roser’s shoes.

With three starters returning next season, including Nia Coffey and Ashley Deary, the ‘Cats are in good shape to make another run.