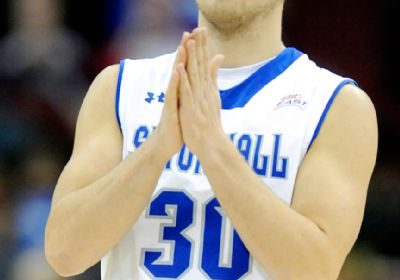 Jaren Sina, along with Nate Taphorn, made up Bill Carmody’s final recruiting class at Northwestern.  Once Carmody was fired from Northwestern, Sina reopened his recruitment and ended up at Seton Hall, where he averaged 7.0 ppg, 2.3 assists, and 2.5 rebounds in his sophomore year after a Big East All-Rookie Team selection in his freshman campaign.  Sina, amidst a tumultuous season for the Pirates, announced that he would transfer this February.  Sina is regarded as a three point specialist at the point guard spot, as more than 79% of his field goal attempts last year came from behind the three point line, making him a stereotypical Michigan guard.  We’ll see how his recruitment shakes out.