Looking back and looking forward at NU men’s basketball 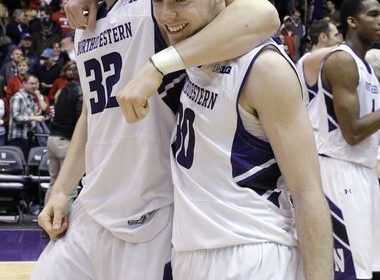 As March Madness heads into its second weekend, Wildcat fans are in a position that they’ve grown quite accustomed to: left out. Northwestern rallied to finish the season with a record of 15-17 and a 6-12 conference record, highlighted by home wins against Iowa and Indiana. It wasn’t good enough to qualify for NIT contention, and Northwestern wouldn’t entertain the idea of playing in the CBI.

There were a lot of things to be excited about this last year, and it all starts with the freshmen. Chris Collins brought in 5 fresh faces, making up maybe the best recruiting class in Northwestern history. 3 of them started at one point or another (Bryant McIntosh, Vic Law, and Scottie Lindsey), 1 of them was a useful reserve (Gavin Skelly) and 1 never really saw the floor (Johnnie Vassar).

McIntosh was a deserving All-Freshmen selection, averaging 11.5 points and over 4.7 assists per contest. McIntosh ran into the Freshman Wall in a disturbingly violent collision at the end of the season, but from the first game of the season, it was clear that McIntosh was going to be NU’s best freshmen. He’s deceivingly quick at getting to the basket, and his outside shot is one of the best on the team. His future is super bright.

Scottie Lindsey and Vic Law’s seasons had different arcs. For Lindsey, after playing in the cushy non-conference schedule, he seemed to fall out of the rotation until the Purdue game. For the next 2.5 weeks, Lindsey played great. He hit outside shots, grabbed boards, and created mayhem. Then, with the exception of the Tre Demps Michigan game, Lindsey struggled in the home stretch, exemplified by his 2 point outing plus a technical foul at Illinois in 22 minutes. Lindsey has some kinks to work out, but might have the best shooting stroke of any NU freshman.

Law, on the other hand, took even longer to get going. In mid-February, Vic Law was shooting just 25% from three and just 36% from the floor. Then in four games starting against Penn State on February 21st, Law scored 17, 14, 8, and 11, en route to winning a Freshman of the Week award. Law showed glimpses of his sky-high potential, now he just needs to put on muscle and get better at attacking the rim.

Skelly and Vassar, at this point, are just energy guys. Both put stamps on games on the defensive end of the floor, but offensively there’s a long way to go. Skelly can run and jump, but he doesn’t have a jump shot, and he’s still a little undersized to go back to the basket against the Big Ten’s biggest. Vassar is clearly a crazy athlete, but he doesn’t have a great handle nor a good jump shot, things that will have to develop for him to get into the rotation.

Alex Olah and Tre Demps too were bright spots, as both grabbed All-Conference Honorable Mention nods. Olah has made steady improvement each offseason, and this year, it manifested in 11 games with 15 or more points. He averaged nearly 12 and 7, and with Mo Walker graduating and perpetual AJ Hammons-going-pro rumors ongoing, Alex Olah is going to be one of the best returning centers in the conference.

Tre Demps continued to do Tre Demps things this year. With clutch shots against Elon and North Florida in back to back games and enough ridiculous threes for an entire career in one evening against Michigan, Demps continues to be “The Guy” for NU in clutch time. Demps, especially in the second half of the season, picked his spots well and buried the shots he took. His shot selection can be vexing, but the bottom line is that a contested Demps look is better than an open look for just about anyone else on the team.

But even with all of those positives, Nortwestern was still one of the worst teams in the conference. They finished 10th in the conference, ahead of a Nebraska team that had the second worst offense among power conference teams, the Penn State DJ Newbills, and Rutgers, who had the worst offense among power conference teams. Northwestern’s defensive efficiency dropped from 14th nationally last year to 165th this year. The switch to zone helped, but NU still struggled to get consistent stops, and failed to create turnovers.

Northwestern needs to take a big step forward next year, and they should be well equipped to do so. Northwestern loses only Dave Sobolewski and JerShon Cobb, neither of whom were major contributors this year. Northwestern will bring in a legit big man in Virginia Tech transfer Joey Van Zegeren, along with another solid recruiting class headlined by Aaron Falzon and also including Jordan Ash and Dererk Pardon. If Sanjay Lumpkin can score a couple of buckets a game, Nate Taphorn can learn how to rotate properly in a zone, and the freshmen avoid a sophomore slump, next year should be notably better than this year.

The problem is that the conference is going to be notably better too. The Big Ten was bad this year, and there’s no way it can be this bad again. Wisconsin loses Kaminsky and Gasser, but Hayes, Dekker, and Koenig are enough to build a team around. Michigan State loses Branden Dawson and Travis Trice, but returns Denzel Valentine and Bryn Forbes plus brings in a top 15 recruiting class. If Melo Trimble comes back, Maryland should be a solid team once again, even with Dez Wells graduating. Purdue loses only Jon Octeus. Ohio State brings in a 5-star recruit and 4 4-star players. Indiana loses no one. Illinois loses Rayvonte Rice and Nnanna Egwu, but Tracy Abrams will come back after missing this year with injury and brings in the 15th ranked recruiting class according to ESPN. Michigan could move to the top of the conference with Irvin, Walton, Albrecht, and maybe LeVert all coming back. The good news for NU is that no one knows what to make of Nebraska and Minnesota, Penn State, and Rutgers should all be significantly worse.

Next year will be a watershed year. Tre Demps and Alex Olah will be seniors, and it would be a real shame to see them leave the program without making the NCAA Tournament. The fact that the Wildcats were able to take the loss of Drew Crawford in stride is promising. But now is the time for Northwestern to go from onlookers of the postseason to partakers.  Taking such a jump wouldn’t be unprecedented, but it is certainly uncommon.  The deck may be stacked against NU, but don’t tell Chris Collins and company.  You can bet that they’ll be gunning at snapping that infamous tourney-less streak.