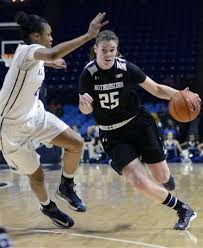 The season ended on a sour note for Northwestern women’s basketball, falling to Arkansas 57-55 in the first round of the NCAA Tournament. But that didn’t take away from what was the best season for the Wildcats in a very long time. In late December, Northwestern made their first ever appearance in the USA Today Coaches Poll, and their 23 wins were the most since 1995-96. NU’s trek to the big dance is well deserving of a recap, and what better way to do so than through gifs!

Coming of a season in which Northwestern won 17 games and made the WNIT, Joe McKeown returned all of his seven “starters” and roughly 95 percent of the team’s scoring. The mix of experienced veterans and talented youth provided plenty of reason for Northwestern fans to be pumped for basketball’s return to Evanston.

Everything came pretty easy to the ‘Cats in the first four games of the season. After dropping 102 points on Chicago State, NU dismissed their next three opponents by an average of 21 points.

In what was truly a nail-biter, the Wildcats hung onto their undefeated record by defeating a ranked DePaul team in Lincoln Park. Neither team ever led by more than eight points in 50 minutes of play, but Nia Coffey went for 23 points and 17 rebounds to lift the Cats in double overtime.

After getting the marquee victory at DePaul, Northwestern went into cruise control for a trio of games, defeating Virginia Tech, Loyola and Gonzaga in a series of blowouts. The Wildcats were tested on the road at UNLV, but they’d pull out an 88-84 victory and follow that up with an annihilation of Eastern Illinois.

It was hard to watch Northwestern’s unblemished record come to an end, especially since Arizona State was unranked at the time. But the Sun Devils turned out to be really good, finishing second in the Pac-12 and earning a 3 seed in the NCAA Tournament. So the loss wasn’t that bad after all.

To kick off conference play, Northwestern beat Michigan State twice in less than two weeks. In between those contests, the Wildcats beat Wisconsin and lost to Ohio State, one of the Big Ten’s best. Sitting at 13-2, Joe McKeown and the ‘Cats had to be feeling pretty good.

It wouldn’t be a Northwestern sports season without a little concern. The Wildcats lost four of their next five, including three on the road and one to the lowly Penn State Nittany Lions. To make things worse, Lauren Douglas suffered a lower body injury and missed three games. Things were not going the Wildcat way, and NU’s tournament prospects were once again in jeopardy.

The Wildcats would spell the downturn, but to do so, they had to fend off challenges from a rough slate of Big Ten opponents. Northwestern needed overtime to win at Purdue and at Wisconsin, and a Nia Coffey buzzer-beater pushed the ‘Cats past Michigan. Even in the Evanston cold, NU was getting hyped for the postseason.

After besting Wisconsin, the Wildcats had 21 wins and 11 victories in conference. It was already their best season in nearly 20 years. However, something wasn’t quite right.

Despite the solid resume, Northwestern wasn’t getting the credit they deserved from the bracketologists. The Wildcats were still slotted anywhere from an 8 to a 10 seed by many sites, and it didn’t seem like NU had locked up a bid to the big dance just yet.

Northwestern proved the haters wrong by running #20 Rutgers off the floor 80-60 at Welsh-Ryan. After completing their first perfect month since February of 1980, finally, the Wildcats’ return to the tourney was essentially secure.

Riding an 8-game win streak, Northwestern had to be confident going into their final game, a match-up with the Big Ten champion Maryland Terrapins. Yet, the Wildcats would come up a bit short…

Behind a dominant second half, Maryland topped NU 69-48. The Wildcats rebounded with another victory over Rutgers in the Big Ten Tournament, only to be dropped by the #4 Terrapins in the semifinals.

The day was finally here. After a solid decade of mediocrity, the Wildcats were back in the big dance. Joe McKeown and the ‘Cats got a 7 seed in the NCAA Tournament, and although they’d fall to Arkansas in the first round, the team and program had achieved what was once a very loft goal. Northwestern was finally going dancing! And there was lots of dancing!