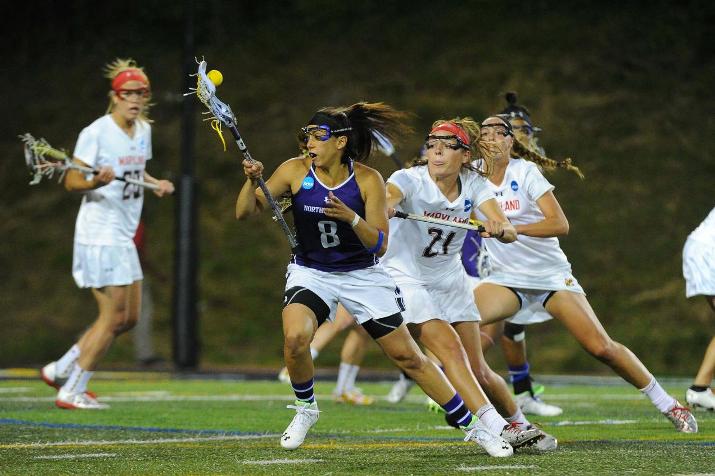 Northwestern Kara Mupo and Maryland’s Taylor Cummings battled at last year’s Final Four, and they’ll go at it again tonight. Cummings ranks among the NCAA leaders in draw controls, while Mupo is coming off a five-goal game against Syracuse. Photo credit: Greg Wall.

Northwestern got a tough draw for their first Big Ten game of the season, and the first Big Ten lacrosse game ever. The number four Wildcats host defending champion and top-ranked Maryland tonight at Lakeside Field in a re-match of last season’s NCAA semi-final, in which the Terps eliminated NU 9-6. This game is especially important for Northwestern coach Kelly Amonte Hiller, who played for Maryland from 1992-1996 and has not faced her alma mater in the regular season since 2007.

The Terps and Wildcats have faced two common opponents this season: ACC powerhouses Syracuse and North Carolina. NU knocked off the Orange 11-10 in their last game, and Maryland beat Syracuse 10-7 on March 7th. While the Wildcats lost to the Tar Heels 12-11 in late February, Maryland beat UNC 13-11 the week before. In fact, Maryland has won all nine of their games this year by multiple goals, while five of Northwestern’s seven contests this season have been decided by a single goal.

Here are three keys to today’s game between the Big Ten’s best:

At last year’s Final Four, the Terps out-drew NU 10-7. And that was when Northwestern had Alyssa Leonard, the NCAA’s all-time leader in draw controls. The Wildcats will need to find a way to stay close to Maryland in the draw circle, but it won’t be easy. Taylor Cummings ranks fifth nationally in draw controls, winning 6.89 per game. Cummings controlled four draws and scored a goal against Leonard and the Wildcats at last year’s Final Four, and she exploded for six draw controls and six goals against Syracuse earlier this year. Northwestern leaned on freshmen Shelby Fredericks (five draw controls) and Lindsay Darrells (four draw controls) in the circle against Syracuse, and the pair of youngsters will need to be on their game against the cunning Cummings.

Bridget Bianco played well in goal for the Wildcats in NU’s win over Syracuse and their tight loss against UNC. Bianco saved 13 shots against the Tar Heels and 10 more against the Orange. Maryland’s Alex Fitzpatrick ranks fifth in the nation with a save percentage just over 52%; however, Fitzpatrick made only three saves in 14 attempts against the Tar Heels and is in her first season as the Terps’ starting goalie. If Bianco can outplay Fitzpatrick, Northwestern can make sure a small deficit in the draw circle doesn’t become a large deficit on the scoreboard.

This might be the key to Northwestern’s season, let alone this game. Freshman Selena Lasota has been one of the most prolific offensive players in women’s college lacrosse this season, tallying 28 goals in seven games. However, only two other Wildcats have scored double-digit goals this season: both Kaleigh Craig and Kara Mupo have lit the lamp 11 times. For comparison, Maryland’s leading goal-scorer Taylor Cummings also has 28 goals, but the Terps feature four other players with double-digit goals: freshman Megan Whittle is tied for the team lead with 28 goals, Brooke Griffin and Zoe Stukenberg each scored twice against the Wildcats at the Final Four and have scored 18 goals this season, and Kelly McPartland recorded a hat trick at the Final Four and has 10 goals in 2015. While the Terps’ balanced attack keeps defenses guessing, Maryland can key in on Lasota UNLESS some other Wildcats step up on the offensive end. Mupo has played in only five games this season due to injuries; she scored five of her 11 goals in the Syracuse game so she appears to be returning to form. Freshmen Shelby Fredericks and Corinne Wessels stepped up in Mupo’s absence against North Carolina. For the Wildcats to win today, they must contribute alongside a healthy Mupo on the offensive end.