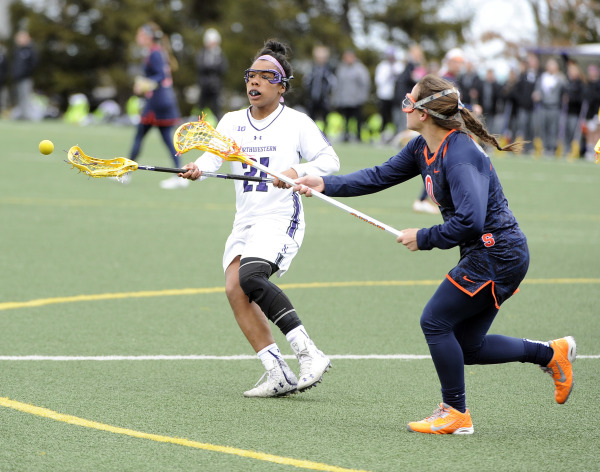 The April cover of Inside Lacrosse magazine had a picture of Maryland’s women’s lacrosse team with the words “Best Team Ever?” written underneath.

I can’t speak to the word “ever,” but I can say the Terrapins proved they are by far the best team right now.

Yes, the Cats’ inaugural Big Ten game did not go quite as planned. With seven minutes left in the first half, Northwestern trailed only 3-2. Less than two minutes later, Maryland led 7-2. Just over 10 minutes later: 12-2.

So what went wrong for the Cats?

This has been a problem for NU all season. With the loss of Alyssa Leonard, the Cats have been unable to replace her production at the draw. It seemed they overcame that struggle against Syracuse, but Maryland is in a different league than Cuse. The Terps are likely heading to an undefeated season and another national championship.

Maryland won the draw control battle 18-5 overall and 10-1 in the second half.

Nobody expected the Cats to win more draw controls than Maryland, but they needed to at least keep it close to have a chance.

Number two is related to number one. Because Maryland won almost all the draw controls, it dominated time of possession (a stat that’s not officially kept). Because it held the ball so much longer, it took significantly more shots. Overall, the Terps outshot the Cats 28-17. On top of that, they were much more efficient, making 16 of those 28 while Northwestern only made five.

For a team that already takes fewer shots than most teams on average, Northwestern has to at least increase its time of possession or make a greater percentage of its shots if it wants to win games.

Yes, this loss is deflating. But overall, I don’t think it’s the end of the world for the Cats. But even with the loss, NU still beat Syracuse and Virginia and lost to UNC by only a goal.

Is Maryland a much better team than Northwestern? Yes.

But is Maryland much better than every other team too? You bet.

The moral: Don’t worry yourself too much over this one. The Cats are right there with everyone else and have as good a shot as anybody not named Maryland, if not a better one, to make the Final Four.