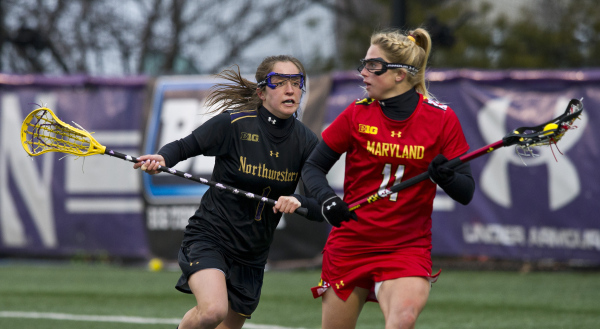 Northwestern did not play like Northwestern last time out. At the hands of Maryland, Northwestern got tuned up, losing 16-5, suffering their biggest loss since April of 2013, when the ‘Cats lost 22-4 to Florida in Gainesville. Northwestern got stomped, there’s no denying it. But NU has no time to dwell on it. On Sunday, Northwestern will host its third top ten opponent of the week as the Louisville Cardinals roll into town.

No. 10 Louisville is 8-2, with losses to No. 2 Boston College and No. 6 Duke by a combined 3 goals. The Cardinals are well balanced, ranking 11th in the country in scoring defense and 6th in scoring offense. The good news for Wildcat fans is that Louisville doesn’t exactly force the issue defensively. Lousiville is firmly mediocre in the turnovers caused stat at 56thout of the 107 women’s lacrosse programs.

The Cardinals are led by a trio of goal scorers with Hannah Koloski (33 goals good for 8th nationally), Faye Brust (34 goals, good for 7th nationally) and Kaylin Morissette (who has a team leading 45 points). Morissette is having herself one heck of a season. The Ontario native cracks the top 50 in ground balls, ranks 6th nationally in goals, and probably most importantly, leads the nation in draw controls with 118 in 10 games. Northwestern was always going to struggle to replace Alyssa Leonard, but Maryland exposed just how much NU is struggling in that facet, beating the Wildcats 18-5.  Morissette and Louisville provide no respite.

Last year, these two teams met in the NCAA Tournament and Northwestern emerged victorious, beating the Cardinals 11-8 at Lakeside field. Northwestern dominated Morissette in draw controls, holding her to just 3 and winning the overall draw control margin 14-7 thanks to 9 draw controls from Alyssa Leonard. Northwestern won’t have Leonard this time, but Kara Mupo is probably chomping at the bit to get on the field, as she lit up Louisville for 4 goals on 6 shots the last time these teams played. Bridget Bianco also had a good game, especially in the second half where she saved half the shots that Louisville put on frame.