Posted on March 28, 2015 by Michael Stern Leave a comment 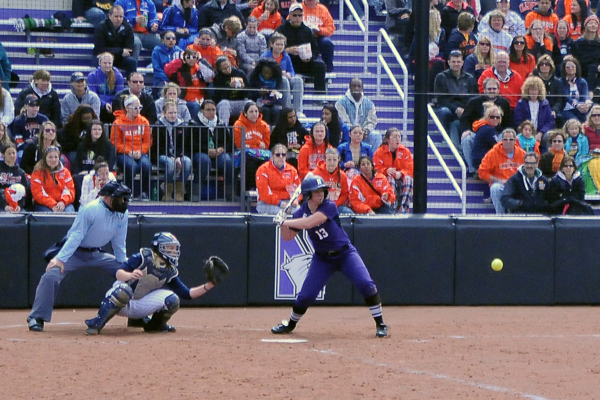 Northwestern softball stayed hot (that’s an understatement), scoring eight runs in the first and eight more in the fourth en route to a 19-0, five-inning mercy rule victory over Wisconsin. Those 19 runs are the most Northwestern has scored in a softball game since 1983, and the ‘Cats scored all 19 while making only 12 outs. The victory was the Wildcats’ 13th in their last 15 games. NU is now 4-0 in Big Ten play, with a chance to win their second straight conference series later this afternoon.

Freshman leadoff hitter Sabrina Rabin did it all offensively, going four-for-four with four RBI, three runs scored, and two triples. She was far from the only Wildcat in on the action, however, as NU set a school record with 19 hits in four innings.

Senior outfielder Olivia Duehr stayed hot with a fourth-inning solo homer (her sixth of the season and fifth in four Big Ten games), one of five long-balls hit by NU in the game. Senior Julia Kuhn got the homer party started with a three-run blast in the first inning, her third of the season. Andrea Filler’s third-inning solo shot was her team-leading seventh of the season and gave the Wildcats an 11-0 lead after three.

The fourth inning was where things really got ugly. Following Duehr’s solo blast, coach Kate Drohan emptied the bench, but that didn’t stop the power display. Junior Fran Strub crushed her first career homer (a three-run blast) to make it 16-0 NU before freshman catcher Sammy Nettling capped the ‘Cats’ fireworks show with a three-run blast of her own. Nettling’s big fly was her second homer of the season, the Wildcats’ third of the inning, and NU’s fifth of the game.

Kristen Wood was just as dominant in the circle, twirling a one-hit shutout to improve her season record to 8-3. Wood recorded 11 of her 15 outs by strikeout, and has now fanned 128 batters in 95 innings.

Mariah Watts took the loss for the Badgers. She allowed 15 hits and 16 runs (all earned) in three innings. Watts stuck out two Wildcats, but walked seven.

The best/worst part of the story? This was merely game one of a double-header.