Northwestern softball stomped Wisconsin in game one of a double-header yesterday.  It wasn’t one of those “Oh, they stuck around for a while and then kind of fell off” game.  No.  It was a lot meaner than that.  It was one of those “Can I give those Badgers a hug?” kind of games.  By the time the carnage was brought to an end, Northwestern had scored 19 times.  Wisconsin scored 0 times.  Not once.  That means Northwestern won a game 19-0.  Not in football.  In softball.  That’s like, historically, one sided.

Northwestern did a lot of good things.  They had 19 hits, which is a school record.  6 hitters had multiple RBIs.  Only 4 Wildcats failed to reach base multiple times.  3 of those were pinch hitters, and one of those, Fran Strub, hit a 3-run homer in her only plate appearance.  Doing these things proved to be a winning strategy for Northwestern and are things I would strongly advocate them doing for the rest of the season.

Everything about this game screamed for some statistical analysis, and I sure am a sucker for looking at old box scores.  The last time Northwestern went to the College World Series was in 2008.  I wondered if, going back to that 2008 team, any Wildcat team whooped someone this bad.

The answer was, no, they did not.

LET’S LOOK AT SOME GRAPHS TO SEE HOW RIDICULOUS THIS GAME WAS.

(Pictures can be expanded by clicking on them)

Northwestern has played a lot of softball games in the last seven years, but usually they do not score 19 runs.  In fact, the average number of runs Northwestern scores in a softball game is 5.24.  19 runs is more than 3.5 times more than 5.24.  The Wildcats more than tripled their scoring average, and they did it in just FIVE INNINGS.  THE GAME WAS OVER BY RUN RULE AFTER THE TOP OF THE FIFTH.  Props to the rulemakers for realizing there would be games as slanted as this one that need to be put to rest early. 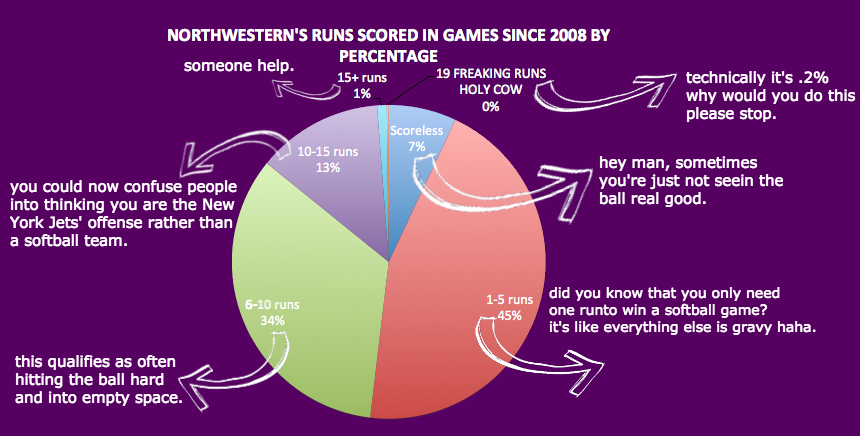 Northwestern most often does not score 19 runs in a contest.  In fact, it is much more common for them to not score than to score a touchdown and 4 field goals in one game.  Speaking of football, 7 times in the NFL since 1945, the average points scored per team per game was less than or equal to the amount of points scored by Northwestern against Wisconsin yesterday.  Again, I stress that this was a softball game and not a football game that Northwestern played. 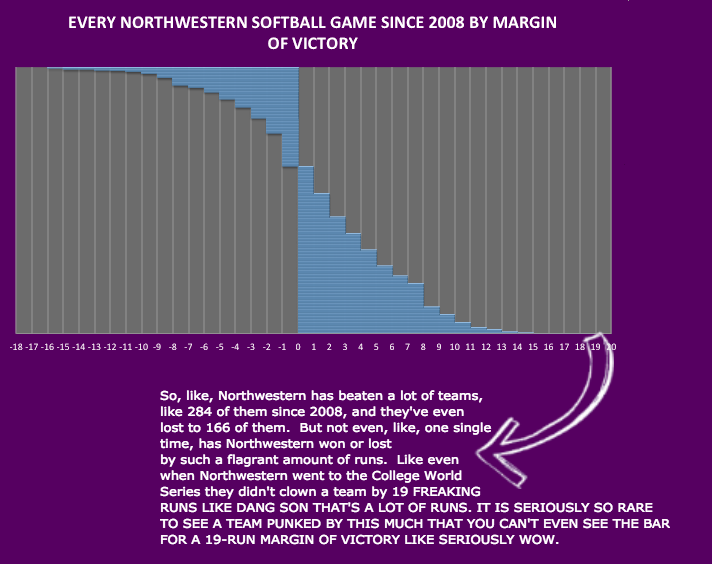 Scoring 19 runs is darn near impossible.  But to do it while holding you opponent to 19 less than that is almost mean spirited.  Kristen Wood threw a five inning one-hitter.  She only walked 3 hitters.  Wisconsin was smoked in both parts of the game in epic ways.  I am glad I am not a Wisconsin Badger player or coach.  What could you say after, that?

Coach: “Yeah, you guys didn’t play well out there.”

Here’s where it gets worse.  Northwestern played Wisconsin twice yesterday.  They won the second game 14-6 by run rule after 5 innings.  That’s a long bus ride back to Madison.