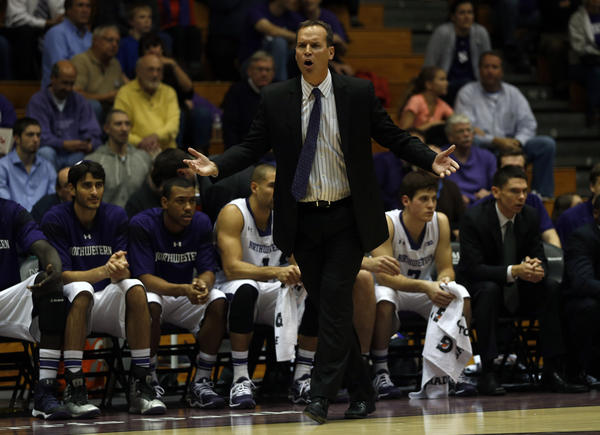 There’s a scene in House of Cards where, when a political challenger tries to blackmail Frank Underwood, Frank says “You’re one of us now…one of the men in our smoke filled rooms.”

Northwestern is now, most definitely, one of “the men.” Johnnie Vassar’s transfer opens up a scholarship for Northwestern to use, and, make no mistake, they will use that open scholarship. The early favorite to fill the scholarship is Kipper Nichols, but there may well be another recruit or graduate transfer who fills that void. That story will be talked about until someone signs on the bottom line.

Let’s talk about oversigning, something that is a dirty word in college recruiting. Oversigning is, simply, signing more people than there are available scholarships. Division 1 men’s basketball allows 13 full scholarships to be given out each year. That means that scholarships are not technically 4-year deals. It’s a year by year thing. The general assumption is that a player will stay four years, so the only scholarships that need replacing are seniors who are graduating. Teams will, obviously, offer more scholarships per year than they can honor, just like colleges send out more acceptance letters than they want to honor. It’s about predicting a yield. The difference is that, of course, once all the spots on a basketball team are full, you don’t have to sign anyone else. Sometimes, coaches will ask a player currently on scholarship to leave the program so that they can add a new recruit. This is called oversigning.

Northwestern isn’t completely inexperienced when it comes to that phenomenon. Jared Swopshire came to Northwestern for a fifth year after Louisville and Rick Pitino oversigned, and Swop had a pretty good year in Evanston before he got injured.

Johnnie Vassar transferring does not mean that Northwestern is oversigning. Maybe Vassar felt like he deserved more playing time. Maybe there was a culture issue. I don’t know, and I certainly don’t want to speculate. What we do know is that Northwestern has been courting players before Vassar left and after Aaron Falzon, Jordan Ash, and Dererk Pardon committed. According to some sources, Northwestern offered Sacar Anim, a 6-4 wing from Minnesota, back in February. Anim ended up committing to Marquette. Northwestern has had an offer extended to Kipper Nichols for a while now. Northwestern seems to be pretty well equipped to handle a transfer.

I want to emphasize that there is nothing, at least according to the letter of the law, wrong about doing this. Johnnie Vassar, nor Kale Abrahamson, nor anyone else, has been forced out at Northwestern. Vassar was the one who ultimately made the decision to leave the program, and that is incredibly important to remember. But let’s call a spade a spade: Northwestern, it appears, is like everyone else now.

Tom Crean does this at Indiana. Rick Pitino does it at Louisville. The SEC is famous for doing it in football. It is what it is. Do I think Northwestern has somehow “lost its way” or is now morally corrupt? Absolutely not. But it is certainly different.

Johnnie Vassar will be attending his 6th school in 6 years next year. I certainly hope that he has a great time there. I’ll miss Agent0’s mixtape reel dunks. For Chris Collins, the task becomes finding a replacement.