Posted on April 1, 2015 by Michael Stern Leave a comment 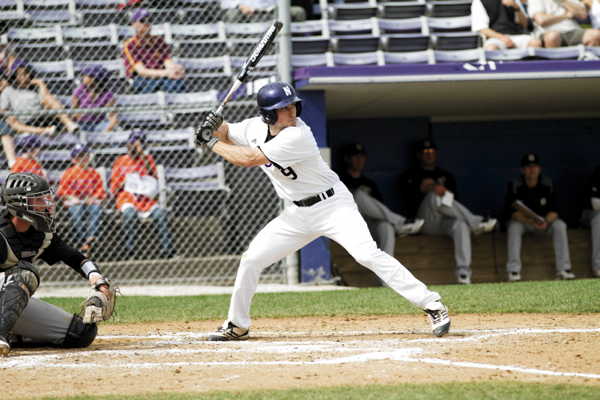 It’s time to check in on Northwestern baseball and softball. Both teams won a Big Ten series this weekend and scored 19 runs in a game (softball dropped 19 on Wisconsin Saturday, while baseball did the same to Minnesota Sunday). Let’s cover the bases:

Kyle Ruchim was widely regarded as the Wildcats’ best player heading into last season, but he suffered a season-ending arm injury during the team’s opening series. Ruchim was considered NU’s best player heading into this season, but he served a six-game suspension for using an adviser. As Big Ten play begins, the Wildcat offense is heating up, and so is Ruchim. The senior belted three homers this week (two against Minnesota and one against Chicago State) and contributed five RBI in Sunday’s 19-7 win over the Gophers. Ruchim’s .351 average leads the team, and he’s the only Wildcat with multiple homers this year. First baseman Zach Jones, a week removed from his seven-hit game, drove in four in Sunday’s win, while Jack Mitchell (yes, that’s kicker Jack Mitchell from the Notre Dame game) added a pinch-hit two-run homer, his first of the season. Catcher Scott Heelan and outfielder Matt Hopfner each recorded two multi-hit games this week, and freshman JR Reimer smacked his first career homer in the ninth inning Friday against Minnesota.

Freshman Grant Peikert contributed both at the plate and on the mound this week, throwing an inning in last Tuesday’s loss to St. Mary’s and two more in yesterday’s win over Chicago State. The youngster is no slouch at the plate, either, as he went three-for-six and scored four runs in Sunday’s 19-run explosion before adding two more hits against Chicago State. Peikert leads the Wildcats with 17 runs scored this season and threw up some zeros this week, but he’s not the only two-way Wildcat. Joe Hoscheit is quickly establishing himself as Northwestern’s closer, as he sealed the Wildcats’ Sunday win over Minnesota as well as yesterday’s game at Chicago State. Like Peikert, Hoscheit also contributes with the bat. He went two-for-six in the ‘Cats’ 13-inning Saturday victory over Minnesota, then recorded three more hits in the next day’s 19-run outburst.

Third Base: Big Innings for NU Softball, against NU Baseball

Big innings were the story this week for both the softball and baseball teams. Baseball dropped two games at St. Mary’s, in large part because the Gaels struck for a seven-run fifth in game one and a six-run third against starter Reed Mason in game two (Mason rebounded spectacularly on Saturday against Minnesota, throwing six scoreless innings in relief to keep the ‘Cats in a game which they eventually won in 13 innings, so it wasn’t all bad for him this week). Friday against Minnesota, a six-run third propelled the Gophers to victory.

On the flip side, softball rode big innings to a 3-1 week. A six-run first against Fordham featured back-to-back homers from Brianna LeBeau (grand slam) and Anna Edwards (solo shot), and led to a 7-2 Wildcat win. NU scored eight runs in both the first and fourth innings of their much-discussed 19-0 beatdown of Wisconsin, then used a five-run fourth to put game two of their doubleheader against the Badgers out of reach. Northwestern pitchers also did a nice job of securing shut-down innings following offensive explosions, ensuring momentum stayed with the Wildcats. Kristen Wood threw a one-hitter against the Badgers and pitched well against Hofstra (she did run out of gas in the ninth inning and allow the tying run to score on a wild pitch before the Pride won it against Amy Letourneau in the tenth), while Letourneau picked up complete-game wins against Fordham and Wisconsin, fanning 22 in 12 innings.

The homers just keep on coming for NU softball. Andrea DiPrima and Julia Kuhn both delivered three-homer weeks, while Edwards homered twice and Letourneau helped her own cause with a blast against Fordham. The Wildcats have homered 43 times already this season, which equals their total from all of last year. NU’s top of the order is ensuring the longballs aren’t of the solo variety, as freshman Sabrina Rabin contributed three multi-hit games this week, including a three-for-four effort against Fordham and a perfect four-for-four day against Wisconsin.

Up next: Baseball tries to make it four wins and two series victories in a row in Champaign against in-state rival Illinois, while softball looks to remain unbeaten in the Big Ten when it hosts Purdue.