Posted on April 1, 2015 by Jason Dorow Leave a comment 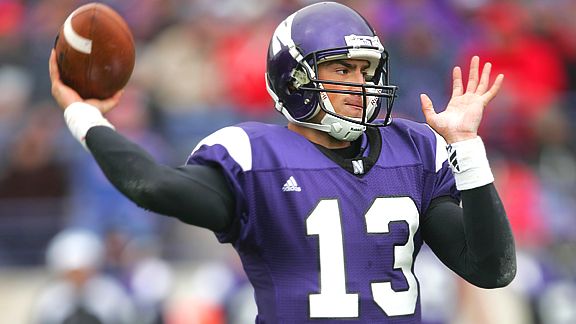 Mike Kafka is back in the NFL. The former Wildcat signal-caller singed with the Minnesota Vikings Wednesday, according to his agent.

Feels good to be back in purple!! @NUFBFamily @Vikings pic.twitter.com/OvfeDazqNz

Kafka threw for over 4000 yards and accounted for 31 touchdowns in his Northwestern career. He finished his Wildcat career by throwing for a school-record 532 yards in a 38-35 loss to Auburn in the Outback Bowl. Kafka also set all-time bowl records in that game with 47 completions and 78 pass attempts.

The former Wildcat was drafted by the Philadelphia Eagles in the 4th round of the 2010 NFL Draft. In 2011, he did see some action with the Eagles, playing in four games and completing 11 of 16 pass attempts. Since then, Kafka has spent time with New England Patriots, Jacksonville Jaguars, and most recently, Tampa Bay Buccaneers.

Off the field, Kafka recently started his own brand of gear and apparel called Roo Outdoor. And several months ago, Kafka joined us on the SportsVoice to discuss his professional career, playing at Northwestern and building Roo Outdoor. You can listen to the interview with Kafka by clicking here.