Posted on April 2, 2015 by WNUR Sports Leave a comment 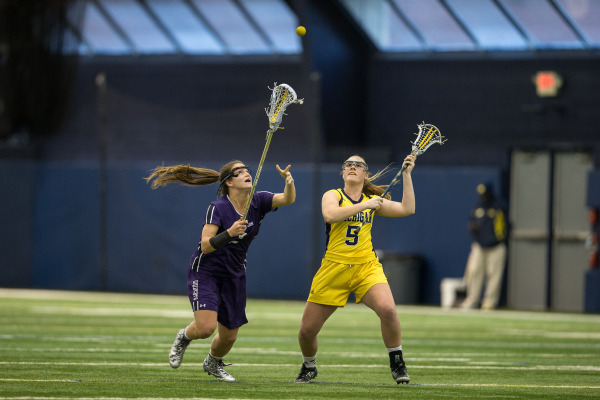 Northwestern’s lacrosse team heads back into Big Ten conference action Thursday night as they take on the Michigan Wolverines under the lights in the Big House. The matchup features two teams heading in different directions and each hoping to notch their first Big Ten victory.

The sixth-ranked Wildcats (6-3) come into the contest following a grueling stretch of home games against three Top-10 opponents. In their most recent contest against #10 Louisville this past Sunday, Northwestern stormed out to an 11-6 lead in the second half against the Cardinals and survived a late onslaught of goals to emerge with the 12-10 victory. Freshman midfielder Selena Lasota and senior attacker Kara Mupo led the attack for the Wildcats, combining for seven goals.

The victory against Louisville came only days after Northwestern lost its highly anticipated clash with #1 Maryland in the first ever Big Ten conference lacrosse game. Lasota was the lone bright spot for the Wildcats, as she registered three goals and an assist against the defending national champs. The rest of the team struggled offensively, as the Terrapins’ sixth-ranked scoring defense held Northwestern to their lowest scoring output of the season in the 16-5 defeat.

The Top-10 homestand began with a hard-fought 11-10 victory over then #5 Syracuse. Mupo and Lasota again led the way for the ‘Cats as the senior captain tied her career high with five goals and the freshman sensation added another four. Northwestern led for the majority of the game, taking their first lead at 3-2 midway through the first half and never relinquishing it. However, the Wildcats were never able to extend their lead as the Orange kept themselves within two goals for the entirety of the second half after trailing 8-6 at halftime.

Michigan (5-5) enters tonight’s game with the bitter taste that comes from being embarrassed by your biggest rival still fresh in their mouths. Last time out, the Wolverines were handed a 13-5 drubbing by the #18 Ohio State Buckeyes. The Buckeyes came out in an attacking mindset and opened up an 8-2 halftime lead before coasting to a decisive victory in the second half.

While a certain home-field advantage comes with a night game at Michigan Stadium, in many ways this matchup represents a David versus Goliath situation for the Wolverines. Northwestern comes in as seven-time national champions and fresh off their 10th consecutive appearance in the Final Four. Michigan, on the other hand, is only in their second year of existence as a program and boasts a roster of only freshmen and sophomores.

Northwestern’s championship drought is entering its third season, but the ‘Cats still know how to take care of lesser competition. All three of Northwestern’s defeats this season have come at the hands of ranked opponents, and in the last four seasons the Wildcats have only lost twice to unranked teams. The silver lining for Michigan fans is that both of those losses came on the road, with the Wildcats losing in overtime to the Buckeyes in Columbus last season, and to Johns Hopkins in Baltimore in 2011.

Lasota has been the model of consistency for the Wildcats–she’s scored 2 or more goals in every game of her college career thus far– but what Mupo is able to give Northwestern could determine the outcome of the game. The Wildcats are undefeated in games where Mupo scores two or more goals, yet have played .500 ball in the 6 games where the senior captain has scored one or zero goals (including games Mupo missed due to injury).

Neither team is dominant on either side of the ball, with Northwestern boasting the 56th ranked scoring offense in the country and 52nd scoring defense, while Michigan checks in at 28th and 77th respectively.

The real question in this game is whether or not the  total number of goals will exceed the 19 combined points put up by these schools’ football teams when they met back in November. If the answer is yes, look for a high scoring affair that could go either way. If the answer proves to be no, look for a dominant performance by the #6 Wildcats as they gear up for another run towards a possible 11th consecutive Final Four.